Top 10 Baits and Patterns: How the Best Caught ’em on Lake Chickamauga 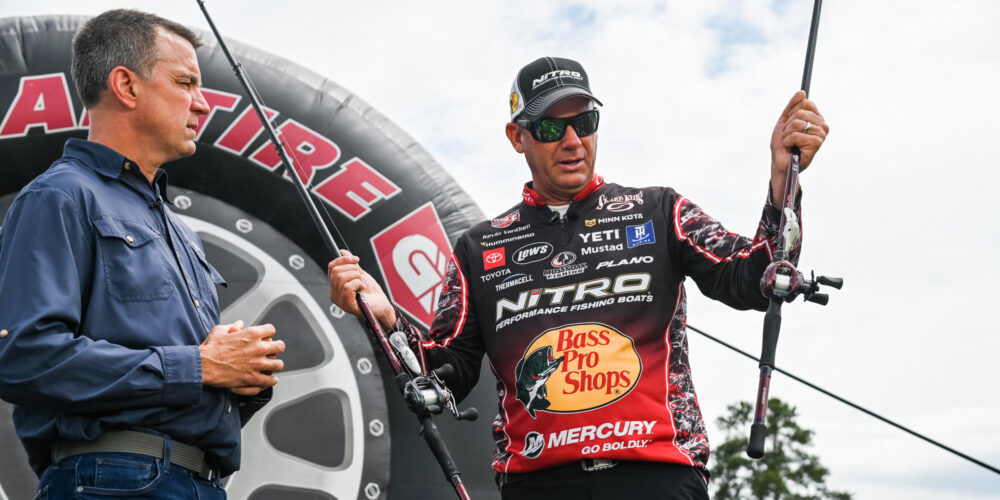 DAYTON, Tenn. – The final day of Bass Pro Tour Stage Four on Lake Chickamauga was one for the ages. The field was stacked with the best in the world at ledge fishing, some local hammers, a couple of finesse experts, and a handful of the greatest anglers of their respective generations.

The event set up perfectly for ledge fishing and that was the primary approach for the Top 10 (although a few bucked the trend and stayed shallow). Here’s how the Top 10 anglers caught ‘em on Chickamauga.

One of the best ever on the Tennessee River lakes, VanDam secured his first Bass Pro Tour win doing what he does best. VanDam worked the offshore ledges on Lake Chickamauga with various baits, but a crankbait did the bulk of his damage.

“I fished a worm, spoon, jig, and jerkbait to show them a different look, but the crankbait accounted for almost all of my fish,” VanDam said.

We’ll have all the details of VanDam’s setup in the Winning Pattern feature and Pattern Within the Pattern packages next week.

Wheeler came into the event as one of the favorites based on his past wins on Chickamauga, and he came close to claiming another trophy. He spent his time offshore fishing ledges, rotating through multiple spots throughout the lake.

“I had several spots but five key ones,” he said. “The biggest thing was they had to have a larger concentration of shells in the shell beds. Some were 12 feet deep and some were 18 feet; they just had to have the right amount of shells.”

Wheeler’s primary pattern was cranking a Rapala DT-16 and DT-20 in the green gizzard shad, citrus shad and Biggs shad. He also landed fish on a ¾-ounce scrounger head with a fluke-style trailer.

Another of his top baits was a Googan Baits Slim Shake worm in the blue baby color.

Tennessee River sharpie Jason Lambert won his group and advanced straight to the Championship Round. He did it by doing what he always does on the Tennessee River: locate as many schools as possible during practice.

“I always try to find more schools than anyone during practice and then try to figure out how to catch them in the tournament,” he said. “I found 27 groups of fish on the main river channel and secondary channel in practice. Then during the tournament, I would run from school to school until you get one to fire.”

Lambert mixed it up with different baits, including a 1-ounce Kitana Hooks Stagger Scrounger paired with a 5-inch Castaic Baits Jerky J in green shad as one of his primary weapons. Lambert also caught several on a soon-to-be-released Duel Hardcore 7+ crankbait that will reach 23 to 24 feet.

Lambert made a late-day run on the final day with an 8-inch Castaic Baits Heavy Metal flutter spoon.

Michael Neal was another favorite heading into the event, and was able to secure a solid finish on his home lake by fishing offshore ledges. He estimated he had located 15 areas on the lake and fished what he could during the event.

“I mainly just stopped wherever I could and places without a bunch of boats,” Neal said. “Some were on the main river and some were in creeks. They were anywhere from 10 to 25 feet of water, but that didn’t matter much; it was just a timing deal and being on them at the right time when the fish were feeding.”

Neal fished all over the lake but had his best success on the lower end with a football jig, deep-diving crankbait, worm, and a bucktail jig.

“The football jig was what got me there and my best bait for the whole week,” he added.

He was fishing a ¾-ounce jig in green pumpkin with a 4-inch Big Bite YoMama in Tilapia serving as the trailer.

Ehrler continued his excellent season implying an assortment of baits on ledges.

“I caught them on ledges all week from 8 to 20 feet deep,” he said. “I had found 10 to 15 spots in practice and had a rotation of about 10 of them during the tournament.”

Ehrler credited a Lucky Craft 3.5XD crankbait, scrounger head, ¾-ounce Boss Jig, a Neko rig, and a drop-shot with a Morning Dawn Roboworm as contributing to his catch this week. Aside from the baits, he said his electronics were the difference-maker.

“I found my fish with my Garmin SideVu and would turn around and fish for them with Panoptix LiveScope,” he said. “Probably 90% of the fish I caught, I saw on LiveScope first.”

Like most others in the field, Shin Fukae spent his time fishing ledges on the main channel. His finesse approach allowed him to win his group and advance straight to the Knockout Round.

“I had a lot of spots and would go back and forth,” he said. “They were mainly shell beds. The key for me this week on the crowded areas was fishing slower than the other guys as some casts would take more than five minutes.”

Fukae used a method he called “meter strolling” that he says is deadly for suspended bass.

He used two different baits; a green-pumpkin-colored Japanese Ika-style plastic that he fished weightless and a Yamamoto D-Shad in shad colors like natural shad. He rigged it on a 1/16-ounce Gamakatsu jighead.

“The key was swimming it off the bottom,” he added. “But (the technique) is also really good for suspended fish.”

Browning made yet another Championship Round doing what he does best: covering shallow water with an Evergreen Z-Man JackHammer ChatterBait.

“I fished a lot of hydrilla and coontail up the river,” he said. “The key was covering lots of water and fishing the scattered grass and places with little openings in the grass. I think I was catching resident fish that live in those backwaters all year long.”

Browning primarily fished a ½-ounce green pumpkin JackHammer with a matching Z-Man Razor ShadZ and went to a bigger version when fishing ditches and places where the grass didn’t grow as high. He went with a ¾-ounce bait in the green pumpkin shad color and paired it with a pearl white Razor ShadZ trailer for these areas.

Alabama’s Jordan Lee also stuck with the ledge bite and used a variety of proven lures.

“I was fishing ledges and drops,” he said. “Some were on the creek channel and some on the main river, but most was obvious stuff. The key was finding something that didn’t have boats on it, and I fished whatever was open.”

His arsenal included a Neko rig and drop-shot with the Berkley PowerBait Bottom Hopper in plum and black, but he also caught fish on a flutter spoon, deep-diving crankbait and a 5/8-ounce David Allen Shuttlecock Hair Jig.

“I’d throw the hair jig in there first and might catch one or two good ones,” Lee said. “Then, I mixed it up with different baits.

Ashley was one of the few anglers who made the shallow bite work and he did it after trying the ledge bite in practice and realizing it wasn’t for him.

“I kept it simple and fished shallow in little pockets off of the main river,” Ashley said. “I think there’s a population of fish that come out from deeper water to feed on bream each day.”

His areas were two to three feet of water with hydrilla. The hydrilla created shade and he believes this is why he fared better each afternoon.

“The last period of every day was the best,” he said. “I could see a lot of the fish I was catching cruising, or if I saw where they were positioned, I could come back later and catch them.”

Ashley caught some on topwater baits, but his best lure was a wacky-rigged Zoom Trick Worm in green pumpkin with purple flake.

“A wacky rig and spinning rod was about all I could throw back there with all of the overhanging bushes,” he added.

Gagliardi qualified for the Knockout Round by staying deep, but put all of his eggs in the shallow-water basket for his final two days of fishing.

“The majority of my fish the first two days were out deeper on ledges or in deeper grass,” he said. “I went shallow late in the day during the Knockout Round and made a big run to make it to the Championship Round. Maybe against better judgment, I stayed shallow all day on the last day and tried to make it work.”

Out deep, Gagliardi fished a ¼-ounce Buckeye Spot Remover jighead with a Berkley MaxScent Hit Worm in green pumpkin as well as casting a Berkley J-Walker topwater bait when a fish showed itself.

His shallow area was less than two feet of water and he attacked it with a wacky-rigged Berkley PowerBait Power Nightcrawler in the natural color.

“It was a mix of shallow grass and the fish were laying in the shade,” he said of his shallow area. “It wasn’t in a backwater but wasn’t on the main river either. It’s a place I’ve caught them well in the past, including during the Pro Circuit event last year.”