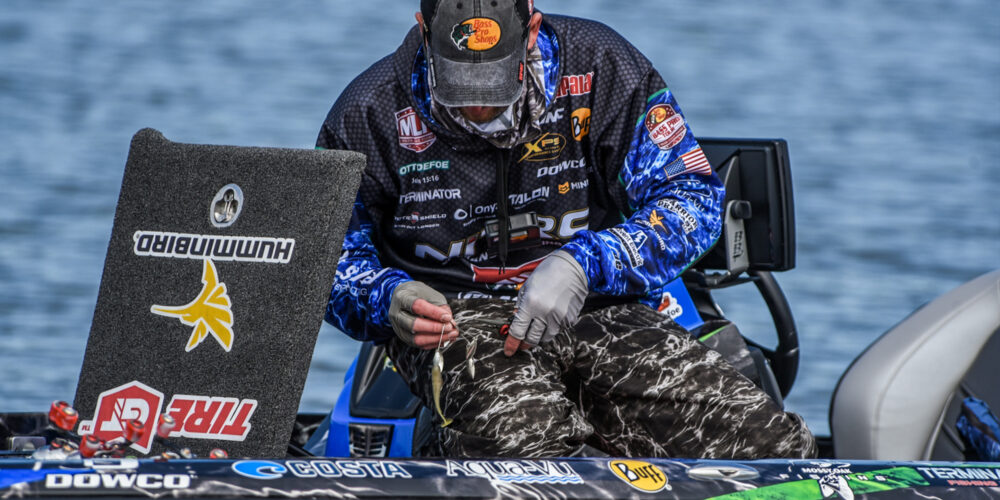 The Top 10 anglers relied on spinnerbaits and jerkbaits to get it done on Lake Eufaula. Photo by Garrick Dixon
March 1, 2021 • Dave Landahl • Bass Pro Tour

EUFAULA, Ala. – REDCREST 2021 was one for the ages. After changing the location of the MLF Bass Pro Tour championship a couple of times – the last change due to unprecedented, icy-cold conditions in Texas – the event took place on the legendary waters of Lake Eufaula.

Dustin Connell took home the big bucks and trophy thanks to a final-day jerkbait surge, but there were nine other anglers who were in the hunt until the final period ended. Here are the baits they used on Lake Eufaula.

Michael Neal took a multi-pronged approach: His primary baits were a ChatterBait, spinnerbait, and deep-diving jerkbait.

His spinnerbait choice was a white 1-ounce lure with a Big Bite Baits Kamikaze Swimon in pearl. Neal fished with the same reel and line as the ChatterBait, but with a 7-foot-6 heavy action Denali Lithium swimbait rod.

“I fished the spinnerbait around brushpiles on the lower end of the lake that were in 7 to 12 feet of water,” Neal said.

Jacob Wheeler started the week fishing a ½-ounce jig and a Googan Baits Bandito Bug, but then transitioned to a jerkbait for the rest of the tournament.

Wheeler’s jerkbait of choice was the 13 Fishing Loco Special in both shallow and deep-diving models. His color choice was primarily Natty Light, but he would rotate through the Lucky Charms and the Epic colors as well.

“I usually use three different color varieties when I’m on a jerkbait bite,” Wheeler said. “A natural color (Natty Light), a translucent color (Lucky Charms), and a flashy chrome type bait (Epic). I’ll use the forward-facing sonar and decide which color the bass are reacting to and give them what they want.”

Wheeler used a mixture of his signature Duckett Rods (and other Duckett rods) along with an 8.3:1 Duckett Paradigm CJW 100 reel.

A spinnerbait was Zack Birge’s primary fish-catcher throughout the tournament (although he did catch a few on a swimbait in the Championship Round).

His spinnerbait of choice was a white double-willow-bladed Omega Genesis in 3/4 or 1 ounce. He fished it with a 7-foot-3 Favorite Rush ZB Signature Series rod. His reel was loaded with 20-pound Yo-Zuri T7 Fluorocarbon line.

David Dudley used a combination of shaky heads and crankbaits to earn a Top-10 finish.

He fished a 1/8-ounce Perfection Lures Sure Hook Up Shaky Head jig, rigged worm wacky style, throwing it around docks with a 7-foot-2 Profishiency spinning rod.

Dudley also caught several key fish on a shad-colored crankbait that ran 6-to-10-feet down along rocky points. His crankbait rod was a 7-foot-2 Profishiency rod and loaded his reel with 10-pound Gamma Fluorocarbon line.

Ott DeFoe used three lures to get into the Championship Round on Eufaula.

“The jerkbait was best overall,” DeFoe said. “I used a 13 Fishing Loco Special. I caught a few on the Rapala OG Slim crankbait, too – the green gizzard color was best. The swim jig was big during my Knockout Round afternoon.”

DeFoe fished the crankbait and jerkbait around brush in 3 to 6 feet of water, and the swim jig in shallow grass (1 to 2 feet).

“I fished both lures around the brush in 10 to 12 feet of water,” Gagliardi said. “I used the Garmin LiveScope to target the outside edges of the brush early and then the heart of the brushpiles later in the day.”

Bryan Thrift was a favorite to win heading into the final round, but his fish supply ran out.

The Damiki pro fished a white and chartreuse big-bladed ChatterBait, a Damiki Underspin in either Tennessee shad or pearl white, a swimbait and a shaky head. He fished all of them using Fitzgerald Rods, Abu Garcia reels and P-Line fluorocarbon.

“I was fishing brush, and rocks and docks and grass and whatever else got in my way,” Thrift said.

His primary fishing depths were between 2 and 8 feet.