What Did You Learn From Saturday’s Sight-Fishing Clinic on Lake of the Ozarks? 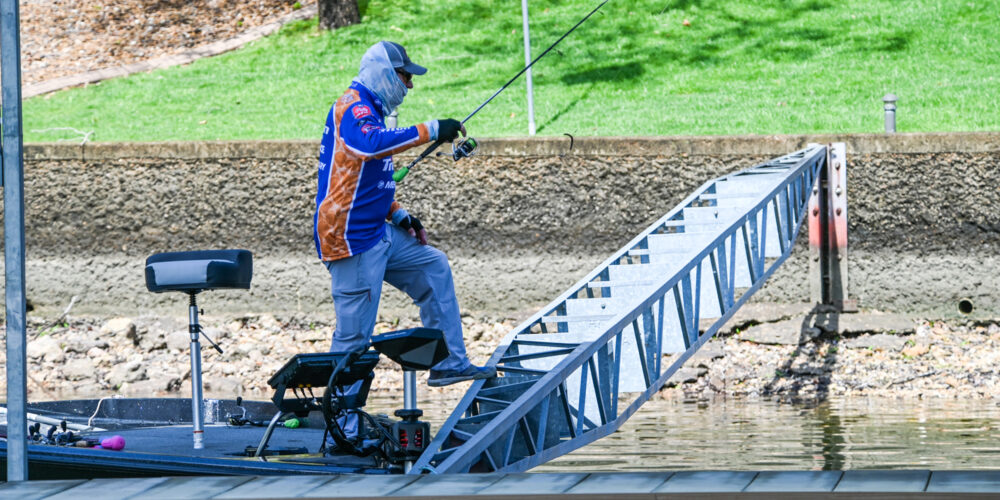 Shaw Grigsby went at fish from all anglers on Day 1 at Lake of the Ozarks. Photo by Garrick Dixon. Angler: Shaw Grigsby.
May 1, 2022 • Tyler Brinks • Bass Pro Tour

OSAGE BEACH, Mo. – If you didn’t get the chance to watch Group A take on Lake of the Ozarks Saturday during their first day of competition at the Bass Boat Technologies Stage Four Presented by Bass Cat, you missed a sight-fishing clinic. If you tuned in, you surely learned a thing or two from some of the best in the world.

Headlined by two of the “OGs” of pro tournament sight fishing, Mercury Pro Team anglers Shaw Grigsby and Alton Jones, SCORETRACKER® was stacked with anglers looking at fish in the shallows. The lake provided a unique challenge as many bass spawn near docks and directly under cables. This makes it hard to present a bait and just as much of a challenge to get the fish to the boat after getting it to bite. Those who had success had to use every trick in the book to catch their bass.

As one of the best sight fishermen in the world, Grigsby admits that doesn’t get to look at fish as much as he likes to: good sight-fishing conditions very infrequently align with the tournament schedule. But all the stars are aligning at Stage Four. Grigsby took advantage of fish flooding the banks and claimed the lead after one day with 14 bass for 37 pounds, 15 ounces.

“Sight fishing is so much fun to me, but it’s been a challenge on Lake of the Ozarks because of all the dock cables,” Grigsby admitted. “The fish like to have something above them to protect them from birds and anglers – it makes them feel more relaxed and protected. I was fortunate today because I didn’t lose any fish on the cables, just some of my baits, but it was all because of how I positioned the boat.”

According to Grigsby, boat positioning is one of the biggest keys to success when fishing for bedding bass (whether they’re lurking under cables or not).

“You have to be far enough away that they don’t see you but close enough to get an accurate cast to them,” Grigsby said. “I’ll use the GPS anchoring on my MotorGuide and position the boat so I can fish from the back deck. You can also use your Power-Poles or tie up to a dock if you need to keep your boat in position. Even beach your boat if you can – just something to keep you from worrying about boat positioning and still be able to make an unobstructed presentation.”

Finishing third on the day, Mercury pro Brent Ehrler sight-fished his way to 11 bass for 34-10 and he adjusted his approach based on the position of the sun.

“It’s no secret with bed fishing, you have to aggravate the fish and get them to bite,” Ehrler said. “In the morning, I had several fished marked from practice and was able to get them quickly by making a long cast with a wacky-rigged Yamamoto Senko on a spinning rod. They’ll bite it fast if you can get a bait to them before they see you.”

As the sun came up and he was more visible to the fish, Ehrler switched to a power approach, putting down the spinning od and switching to baitcasting gear, 20-pound line and a Texas rig.

“It’s just pitch after pitch to get them aggravated and turn around on your bait,” Ehrler said. “It takes much more time with the sun out and you have to work them. I spent 40-minutes on one fish. That’s what it takes sometimes.”

Like Grigsby and others, Ehrler had a challenge on his hands with all of the dock cables, and almost resorted to something out of his bag of tricks: a bait without a hook. Some anglers utilize these to aggravate fish and then switch to a lure with a hook once the fish is fired up.

“This fish was sitting right under a cable and hard to pitch to, so on the break, I rigged up a ‘dummy’ bait with no hook to cast over the cable and get him fired up,” Ehrler said. “This was during the period break and thankfully, he ate my bait right away on my side of the cable and I didn’t have to use that dummy bait trick, but it works.”