Finishes Day with 10-Pound Cushion in Group B Competition 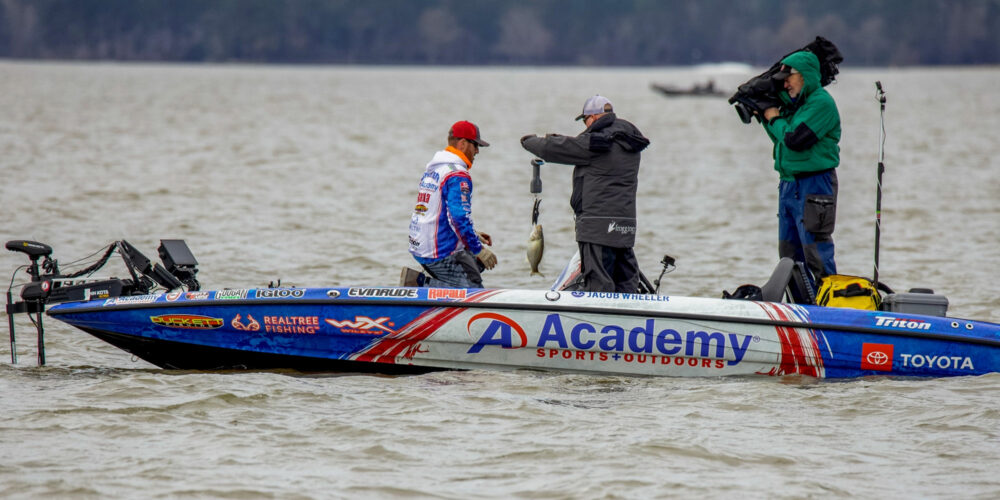 EUFAULA, Ala. – The 40 anglers in Group B made their way to Lake Eufaula today for the second Qualifying Round of the Bass Pro Tour B&W Trailer Hitches Stage One Presented by Power-Pole. This impoundment of the Chattahoochee River was still recovering from a cold snap and high water; add in a large regional tournament and recreational fishing traffic, and nobody knew what to expect from the fishery.

It turns out it was pretty much the same as Day 1: a small group of anglers doing very well and making it look easy and the rest of the field scrapping for bites.

Seven anglers topped 20 pounds compared to just three Friday during Group A’s first crack at Eufaula. Group B totaled 141 bass for 460 pounds, 10 ounces compared to yesterday’s totals of129 bass for 422-12. Remarkably, the average weight of the bass was the same at 3 pounds, 5 ounces.

Wheeler Runs Up the Score

One angler who picked right where he left off after a very successful 2019 season was Jacob Wheeler. During Period 1, Wheeler caught a fish to tie Bobby Lane shortly after 9:30 a.m., and then began his onslaught. Once Wheeler took the lead for the day, he never looked back, and he did so in typical Wheeler fashion: quickly and efficiently.

Fishing a mainly offshore pattern with a variety of tactics, he went against the grain in a tournament where most of the other anglers were beating the bank and targeting shallow cover.

“Today was a great day, and I was fortunate to catch them on a rotation of baits, but I’m still trying to figure out what’s going on the lake,” Wheeler said. “You have to keep an open mind because each day is unique this time of year, and you have to start over every morning.”

Wheeler recorded 15 bass for 42-5, and that catch was made up of a mix of both largemouth and spotted bass.  His lead heading into his group’s next competition day is nearly 10 pounds over second place.

Looking ahead, Wheeler believes change is on the way.

“With the weather warming up, it should help the shallow bite,” he said. “Plus, if it doesn’t rain anymore and the water clears up, there will be much more fishable water.”

The only one who had a realistic shot at catching up to Wheeler today was Strader, who finished with nine bass for 32-6.

“It was a really good day, but it could have been even better,” Strader admitted. “I wish the water would drop a little bit because that will pull some more fish out of the thick cover, and I think I can get more bites doing what I’m doing.”

Like Bryan Thrift yesterday, MLF fans were eagerly waiting to see how David Dudley would stack up against the Bass Pro Tour field after years of success with FLW. And, just like Thrift, Dudley showed he can compete anywhere as he finished fifth for the day with six bass for 22-15.

“It was a fun day,” Dudley recapped. “I loved the SCORETRACKER®, and I kept telling my official all day to give me another update. I like hearing that people are catching or not catching fish, because it helps me process my day.”

Group A will head back on Lake Eufaula tomorrow for the start of several warmer days in the forecast, which calls for a high of 67 degrees tomorrow with sunny skies. Several anglers in the field expressed that the warming trend should lead to improving fishing conditions as we continue towards the finale of the event.

Watch all three periods of competition during the MLF NOW! live stream beginning at 7:45 a.m CST on February 7- 12, 2020. Watch for FREE on MajorLeagueFishing.com, the MLF app, or the MyOutdoorTV app.