Wintertime is Slow-Rollin’ Time, According to Ish Monroe 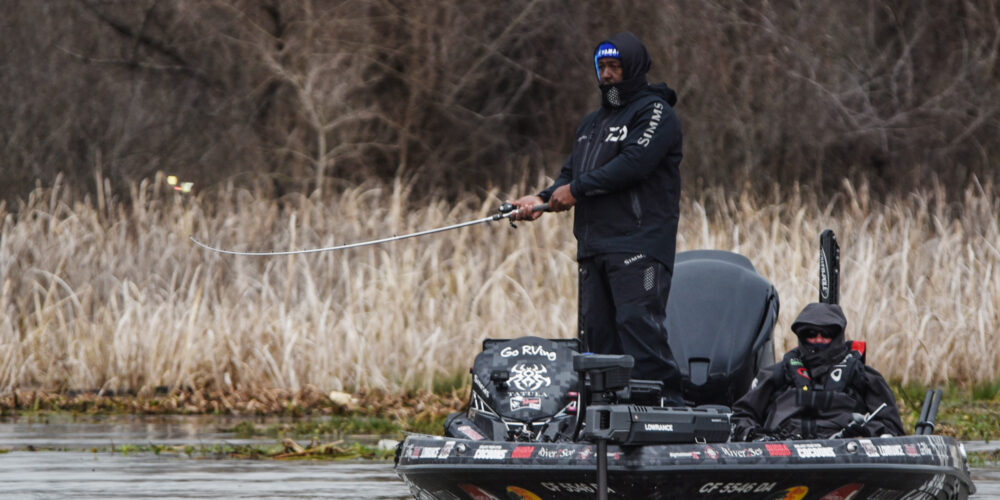 Ish Monroe shares why winter is the time for slow-rollin' with a spinnerbait. Photo by Garrick Dixon
January 11, 2021 • Tyler Brinks • Bass Pro Tour

The slow-roll technique is nearly as old as the bait style itself when it comes to spinnerbait fishing. Slowly reeling the bait through the depths is a great way to catch bass with this timeless bait, and California pro Ish Monroe says the time is now to fish your spinnerbaits in deep water.

“The great thing about spinnerbaits is that you can throw them all year long,” he begins. “During the colder months, you need to slow down with all techniques – I’ll use heavier spinnerbaits for fishing deeper water, and for also making sure they stay down deeper instead of rising during the retrieve.”

Fishing a spinnerbait during the colder parts of the year is a universal way to catch big bass, and Monroe confirms that he’s had success with them for years.

“When the water is in the 50s and even down into the 40s, they will eat a spinnerbait,” he says. “My general rule is the colder it is, the slower and deeper I’ll go. I’ve won some tournaments doing this in freezing rain in 30 to 40 feet of water.”

Monroe generally uses a ½-, ¾-ounce, or even heavier spinnerbait and prefers those with a combination of willow and Colorado blades.

“That (blade combination) will give you both the flash and vibration you want,” he says. “I’ll either use shad patterns or some with chartreuse. I keep it simple and use the shad patterns for clear water and chartreuse for dirtier water.”

One exception is when fishing muddy water, where he opts for a River2Sea Bling spinnerbait in the Lemonade Twist color.

“It has a white and chartreuse skirt, a gold Indiana blade and red Colorado blade,” Monroe says. “I pick that one up when there’s a lot of rain or when fishing muddy water and need the thump and brighter colors.”

When it comes to the “where” of slow-rolling a spinnerbait, Monroe keeps it straightforward and will go as slow as he needs to.

“I fish it in the same places you’d use a jig,” he shares. “Wood, rock, stumps, and brushpiles are good, and that’s what is so good about a spinnerbait: it can be fished everywhere. I’ll count it down and reel it slowly just to keep the blades turning, and then pick it up slightly every time I feel it hit something along the bottom.”

Instead of just tying on a spinnerbait and trying to slow down, Monroe adjusts his gear and tackle according to the time of year.

“I’ll downsize my line to 12-pound Daiwa J-Fluoro Samurai Fluorocarbon (in the winter), where the rest of the year I’m throwing it on 20-pound,” Monroe shares. “The thinner line gets it down much faster.”

Monroe will also purposely choose a slower gear ratio reel when the water temperature dips down.

“During the spring and summer, I’m burning it with a faster reel,” Monroe begins. “When fishing a spinnerbait in cooler water, I want to force myself to slow down and use a 6.3:1 Daiwa Tatula Elite and use the 7-foot medium-heavy Takahiro Omori cranking rod.”

He likes that particular rod because it’s a composite blend, with the best properties of both fiberglass and graphite.

“It is a medium-heavy but still has a soft action,” Monroe says. “A lot of the bites you get will just feel like the bait is not moving anymore or will feel like you are snagged on something. It still gives you a great feel, so you know what your bait is doing at all times.”