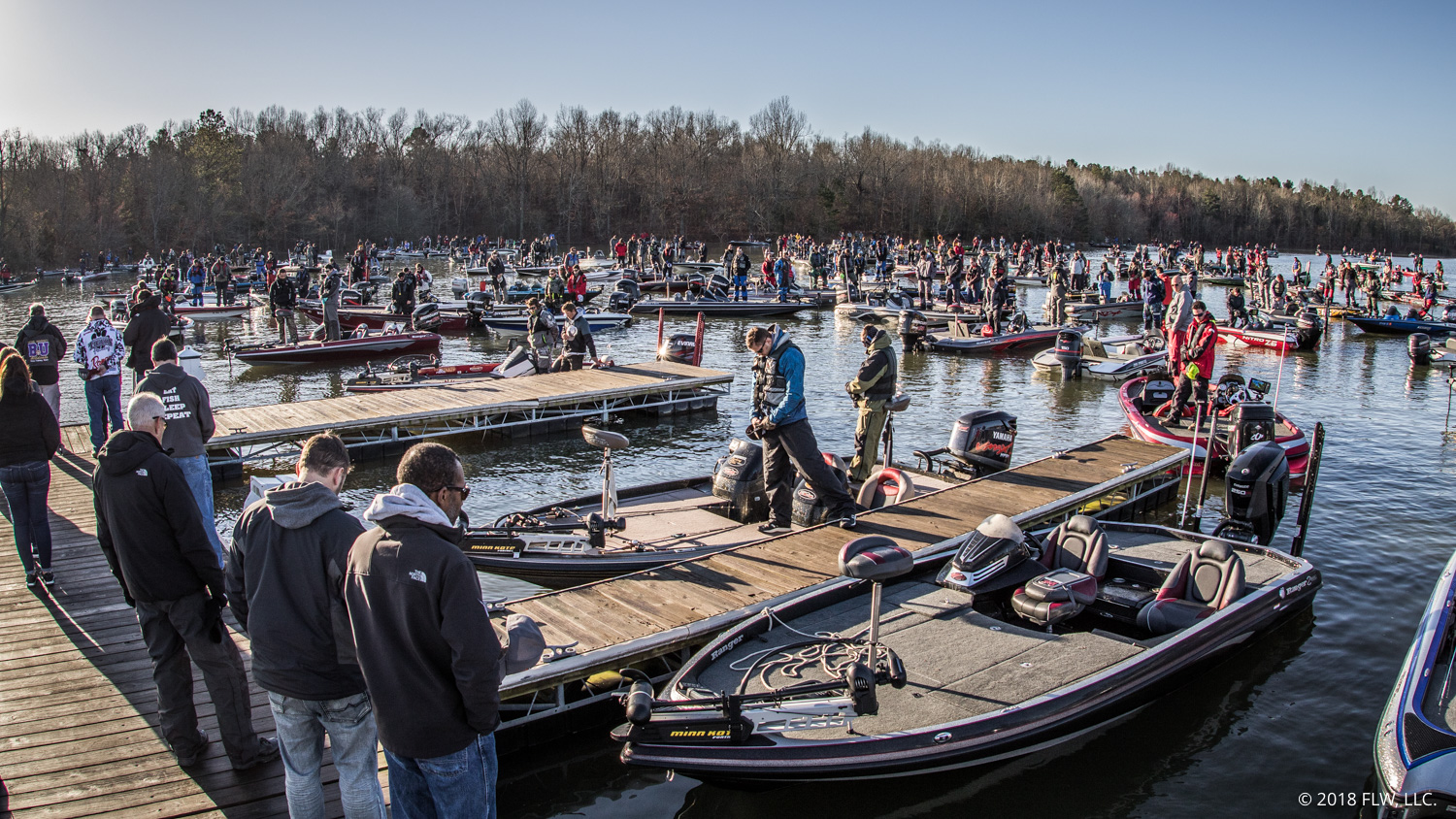 This week’s YETI FLW College Fishing Open on Kentucky Lake could see fish dispersed by flood conditions that have expanded the playing field. When 216 teams from around the country take to this massive Tennessee River reservoir, theirs will be a complicated task with equal measures of great potential and great challenge.

Adjacent lakes separated by the Land Between the Lakes Recreation Area, Kentucky Lake and Lake Barkley are linked by the 1.75-mile Barkley Canal. Both lakes are open to fishing this week, and each presents a viable option, it’s likely that Kentucky will see the majority of the fishing effort.

Completed by the U.S. Army Corps of Engineers in 1944, 22 miles upstream from the confluence of the Tennessee and Ohio rivers, Kentucky Dam is the longest in the Tennessee Valley Authority (TVA) system (8,422 feet). Its reservoir, which stretches for 184 miles across Kentucky and Tennessee, is the largest in the eastern U.S., with 2,064 miles of shoreline and 160,300 surface acres at summer pool.

Both lakes offer a mix of coves and pockets, docks, shoreline wood, and grass.

This is the result of inflow and outflow dynamics. First, the Tennessee River system saw double the annual average for rainfall in February, so Kentucky Lake received a lot of water. Typically, the TVA would release water at an appropriate rate to manage the lake for the desired level. However, the U.S. Army Corps of Engineers, with which the TVA coordinates for flood control, has directed the TVA to hold back water releases to prevent further impacts on the flooding Ohio and Mississippi rivers.

In addition to high water, anglers will contend with a cold front pushing through the area. Morning temperatures were forecast to be in the low to mid-30s, with daytime highs only reaching the mid-50s.

“I think that’s going to make an already tough bite tougher,” says Bryan College’s Nathan Bell, who partners with Cold Sands. “It’s going to be hard to get a bite.”

Dylan True, who won last year’s event on Kentucky Lake with his UT Martin teammate Matthew Lamastus, says he believes that some of the lake’s fish are moving shallow, but many are still holding on prespawn staging areas such as points. The difficulty will be reaching those staging fish.

“All the places we caught them last year are 15 to 20 feet deep,” he says. “It’s hard to get down there – if there are still fish down there.”

Lacking any practice consistency, Sands says he and Bell plan on hopping around several spots and junk-fishing.

“We’re just going to stick to main-lake rock and beat that to death to catch a limit,” he says. “Then we might go up shallow and flip to try and catch a big one.”

“The fish are in the same current break areas they were a couple of weeks ago, which is on the main river. They just have 10 more feet of water on them,” Garrett says. “Last week, we were throwing a Strike King KVD 1.5, and this week we’re throwing an 8.0 and a 5XD.

Water-level impacts are undeniable, but wind will also play a major role. The day-one forecast calls for southwest winds of 15 mph, but day two will bring strong northwest winds. The different directions will likely scramble a few game plans. Strong winds could create a time challenge, too, as anglers navigate open waters.

In terms of what Kentucky Lake will yield this week, Sands says it’s anyone’s guess.

“The lake is changing so fast, and it’s so inconsistent right now,” he says. “There are people who were catching fish last week who aren’t catching them this week. I think someone’s going to luck up and find a decent bag of fish, but I still don’t think it’s going to take a lot of weight to win. I think 16 to 17 pounds a day will have a really good shot at winning.”

Garrett says he’d normally want to run past Paris, Tenn., as far as New Johnsonville, but given the projected rough conditions, he’ll limit his run to the Paris area.

If any statement summarizes the current Kentucky Lake flood situation, it’s this from University of North Georgia’s Levi Baker: “I caught a fish today by flipping a picnic table.”

Format: All teams will compete for two days. The winners will be determined by the heaviest cumulative two-day weight.