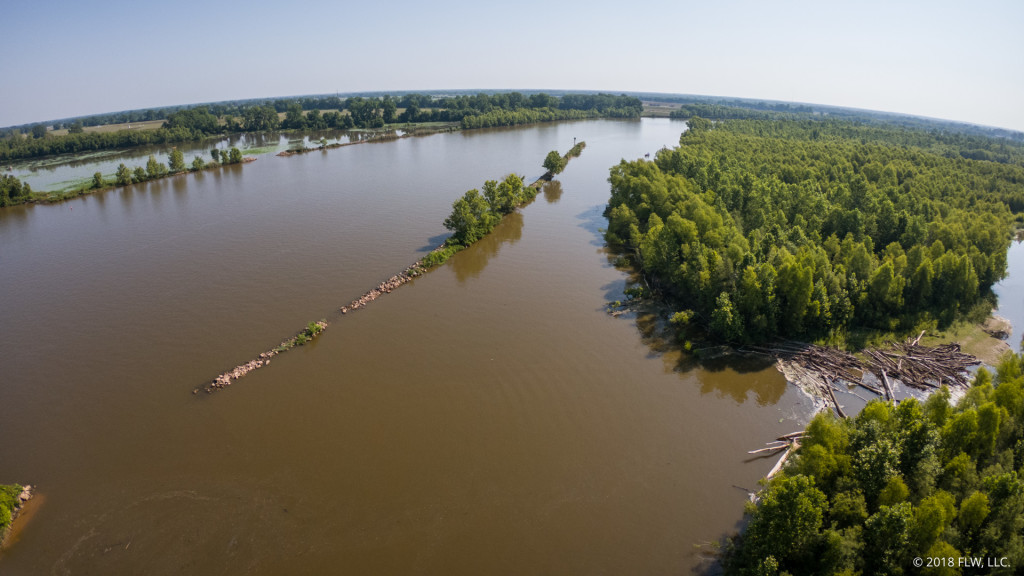 It’s almost June in Louisiana and the highs are going to be in the mid- to upper-90s every day of the YETI FLW College Fishing National Championship presented by Lowrance C-Map Genesis. Held on the Red River in Shreveport, La., 168 teams will contend for the title of National Champions, but don’t expect the fish to come easy – the Red River is going to be a tough nut to crack. 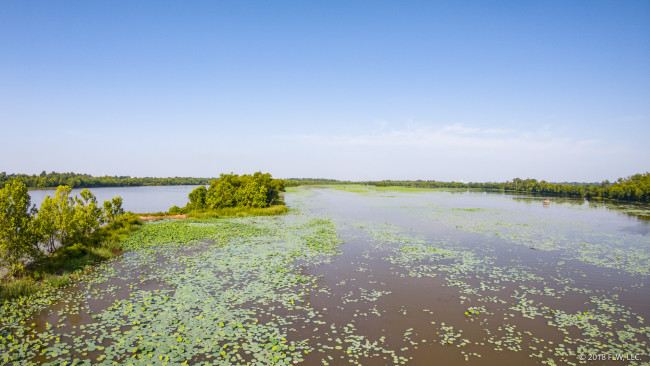 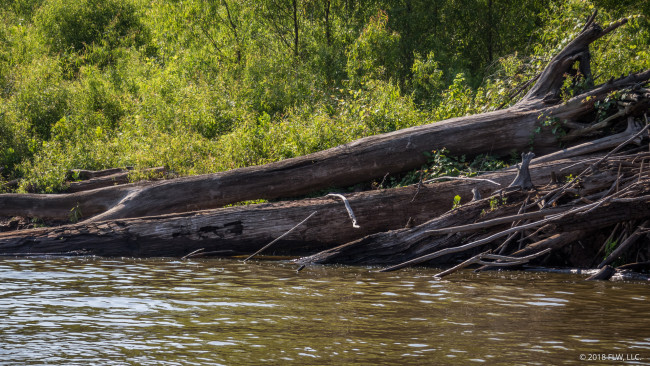 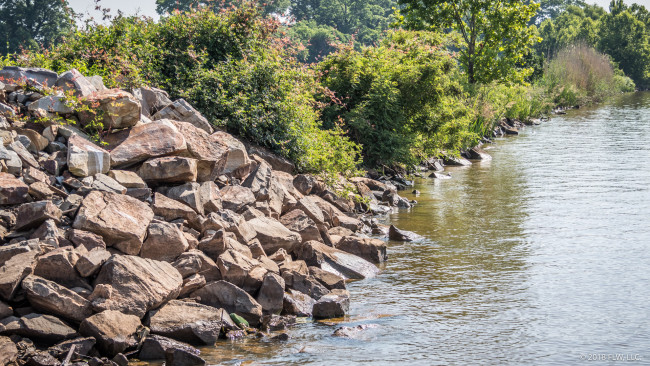 In years past, the Red River had tons of hydrilla and lily pads in the backwaters making the fishing pretty consistent and very good in the spring. Back in 2013, Randall Tharp won the Forrest Wood Cup on the Red fishing shallow with a swim jig and tossed a frog in thick pads, and while that may get the job done this week, the options are going to be slimmer.

Due to spring floods in 2015 and 2016, the amount of vegetation – especially submerged vegetation – has dramatically decreased, and former College Fishing National Champion Brett Preuett has had a front-row seat.

“I grew up only 10 minutes from Pool 3, and growing up it had an abundance of hydrilla and pads and hyacinths,” says Preuett. “It was very common in local tournaments for people to catch 20-pound bags and for a lot of big bags to be weighed. Now there’s hardly any hydrilla or lily pads left, and it’s also silted in a lot of the good backwaters. Now people have a lot more success on the main river – rocks and stuff play more of a factor because the weights have dropped. It’s been super tough for two or three years now, but I’ve heard that this is the first year where some lily pads are starting to come back.”

Despite the lack of vegetation, even if it is making a comeback, there are still a lot of options for the college anglers despite the water temperature sitting over 85 degrees. The backwaters of the Red are loaded with stumps and laydowns, and the main river has lots of rock and manmade cover from industry. There’s also the possibility of spawning bream or shad, as well as some schooling activity that could be in play. Still, without the comfort and habitat that good grass provides, the Red is definitely off her game. 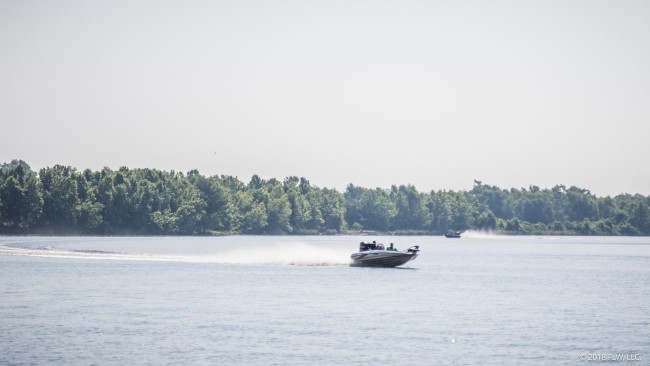 Launching out of Red River South Marina, college anglers will have the run of the river. Going up the river, anglers can theoretically run far past Shreveport if they want to, but the down-river options are more likely. The Red River South Marina is in Pool 5, and it wouldn’t be a surprise to see a lot of anglers lock down to Pool 4 and some lock into Pool 3.

“Through the years, Pool 4 has been a really good area,” relays Preuett. “Chris Lane won the [Bassmaster] Classic there, and it’s always been productive. Pool 5 and 4 will be where the majority will be, and there are good oxbows and main-river stuff in both of them. I grew up around Pool 3, and it takes about an hour and a half to go down there, but there’s still some really good fishing there if someone finds an area that’s got ‘em.”

Pool 4 is easily accessible – it only takes about 10 to 20 minutes to run to from takeoff and a whole tournament field can usually lock through in about 25 minutes. Then, depending on how far you run, you could be fishing just 40 minutes after takeoff. After takeoff, anglers will have an opportunity to lock through into Pool 4 before 7:15 a.m. CT without interference from commercial traffic. After that, the anglers will have to lock back and forth with regular traffic – bad luck or bad time management could be costly, but that’s par for the course whenever locks are involved. 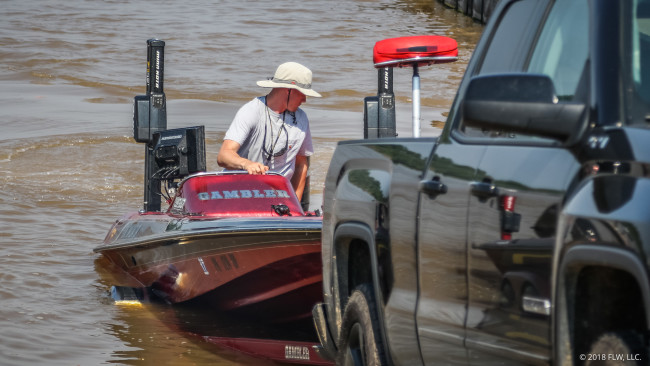 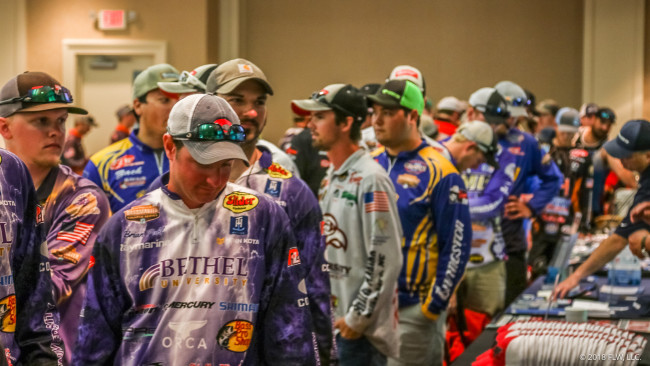 After two and a half days of grueling practice, it seems like the fishing is going to be pretty tough.

“We’re feeling alright,” says Cody Stahl of the Savannah College of Art and Design. “It’s been real slow, but we’ve found a few areas to key on. Getting five bites is going to be key, I think as long as you get five you’ll be alright. No matter where you go it seems like there are one or two fish here and there, but getting those key bites is really hard.”

“It’s been really tough, bites have been few and far between,” says Jake Biram of Oklahoma State University, who fished a Southern Conference event on the Red last fall.  “You catch one and then you run 20 miles and catch another. We were here for three days in September, so it’s good to have some experience. I feel like whoever will average 11.5 pounds will probably win, I feel like a limit is going to go a long ways, and whoever gets that 3-pound bite, that will push them over the top.”

Still hot from a win in the Collegiate Bass Fishing Championship on Pickwick Lake last week, Cole Floyd and Carter McNeil of Bethel University have had a bit of a comedown.