ULM is taking over 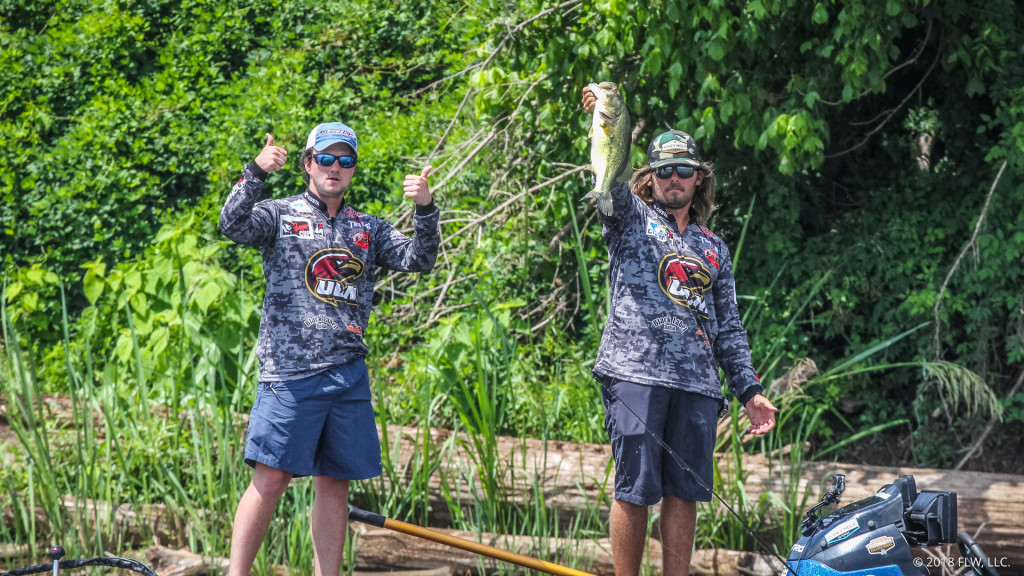 Well folks, we’re going to shut down the blog for the day. The team from the University of Louisiana Monroe is obviously in the driver’s seat heading into weigh-in. Still, you cannot count out Tusculum and the other teams in the field because anything can happen between now and weigh-in. The top 10 teams are set to cross the stage at the Bass Pro Shops in Bossier City at 3:30 p.m. CT. Make sure to hit up flwfishing.com to watch us crown a national champion! 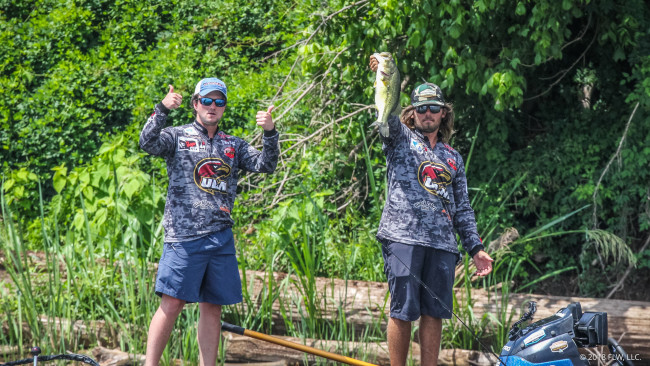 ULM is starting to run show on the Red River. The Warhawks just landed another 5-pound kicker and now have a limit. They’re sitting in an oxbow further north than where they started the day. In all, they should have over 15 pounds in the livewell. It looks like the duo is well on their way to taking it all.

The areas near launch are getting a workout as Adrian College has been there all day. Serafin of Adrian College just added another keeper. They need one more to complete a small limit. Right now they are on a rock pile towards the middle of the river.

Bethel University is still poking away near their backwater next to the lock. Earlier they were fishing a shade line up on shore. Now they have moved off the shade line and are hitting windblown rip rap.

We still don’t know if Tusculum has caught any since we last saw them. According to our tracker we can tell that they are not in the same oxbow that they have been at all week. One can imagine that their juice may have ran out. 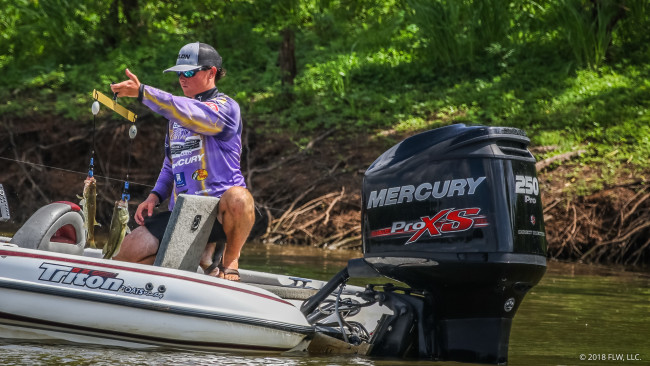 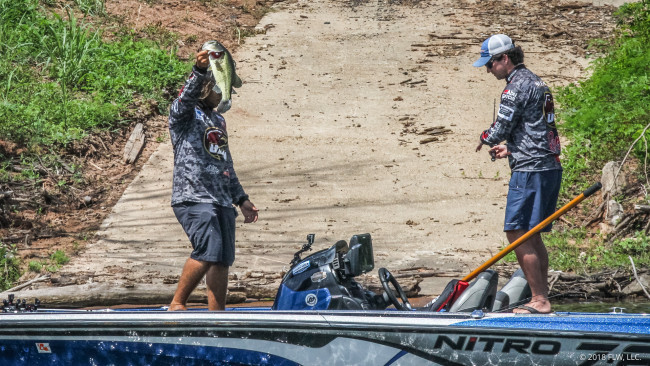 ULM may have just locked things up. After moving into a new oxbow, the Warhawks smacked a 5-pounder off a boat ramp. Freeman said, “I always fish small boat ramps because they’re an easy fish.” Now, ULM needs one more fish to complete their limit. We haven't had a report on Tusculum in awhile but in general will be difficult for anyone to catch ULM.

Bethel University just boxed a couple more up by the lock. They have a limit and just culled for an estimated 11-pounds total. They are working vibrating jigs near the bank.

The ULM team moved back to the stumps they fished earlier. A local crappie angler is sitting close to where they want to fish. Apparently, they have been saving a different spot all week, which they are hitting up next. Don’t be surprised if they catch a few from there. 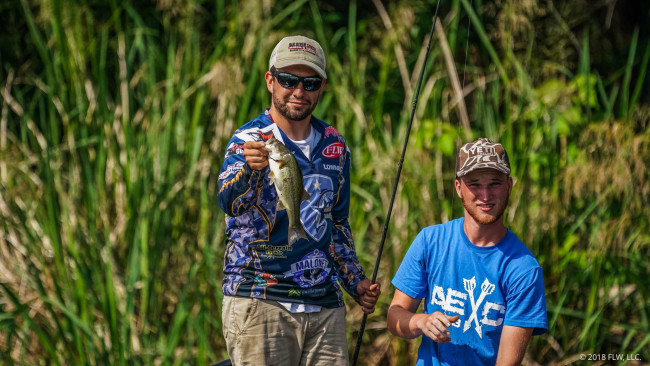 The Murray State boys completed their limit with a small keeper. Right after, they culled up with a 15-incher on a frog. They will need to keep culling for any chance to make a run at the title.

Thomas Soileau and Hunter Freeman of ULM made a move back to their starting spot. Just a minute ago Freeman hooked a fish on a spinnerbait. While boat flipping the fish, the hook popped out. Fortunate for ULM the bass landed in the boat. Now they have three keepers on the day.

Bethel University is on the board! We pulled up on them to find a 3 1/2-pounder in their livewell. Then they added fish No. 2 – a 2-pounder. They are fishing right next to the lock. Back in Sullivan Oxbow, ULM is still grinding with a c-rig and Texas-rigged worm.

We found the Murray State team of Nick Montilino and Brock Spencer tucked way back in a pond. They have four-small keepers in the box. They are currently throwing a buzzbait and flipping in the pads. 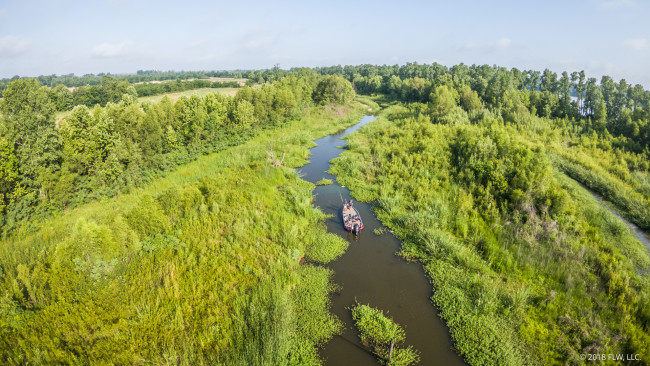 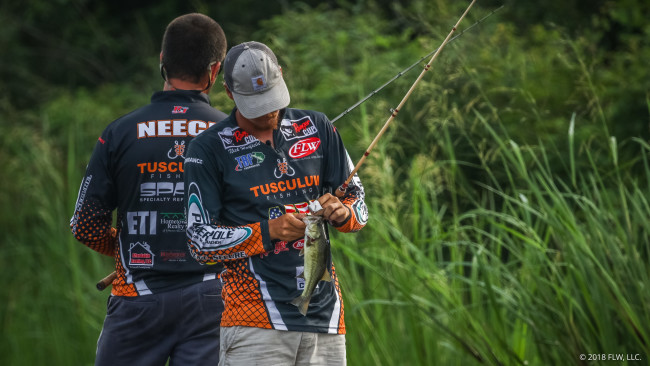 Tusculum has made it way back in their oxbow. The water appears to be clearer the further back they go. Nearby is the old river channel, which is about a foot deeper than the rest of the area. Some bream are also on beds. In general, this area looks like it could be prime to pull fish out of. The big question is if they can milk the area for the third day in a row.

Ardian College’s Chase Serafin and Cody Batterson have rustled up three keepers so far that’ll go 6 to 7 pounds. They’re cranking a wingdam at the moment.

ULM is now on spot No. 3 – an oxbow named Sullivan. The oxbow does not have much depth but there are a lot of stumps that could hold fish.

ULM bailed on their starting spot. Upon pulling up to spot No. 2 the shad were flickering everywhere. Freeman noted that the shad were important to their success from yesterday. Not long after, the Warhawks boated two fish on a c-rig. The first was small and the second was a 2 1/4 pounder. It appears that they are targeting specific humps in the area.

Tusculum managed to pull in keeper No. 3 – an ultra-dink that barely made the minimum 12”. It ate a buzzbait. Yesterday the duo threw back numerous 13-inchers thinking the minimum length was 14”. They succeeded in catching their limits on days one and two so their confusion shouldn’t affect them. 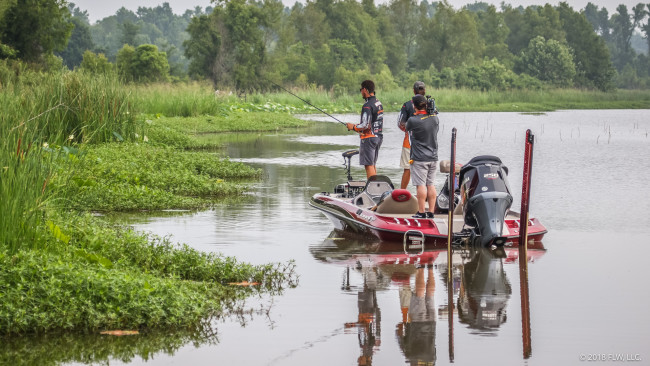 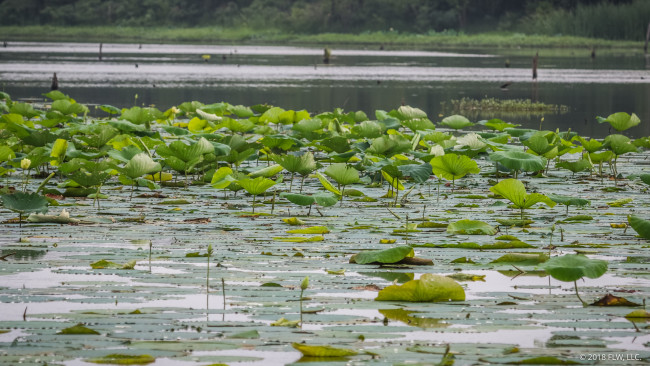 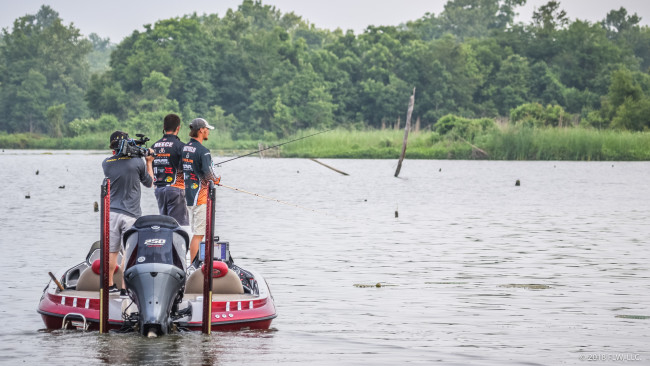 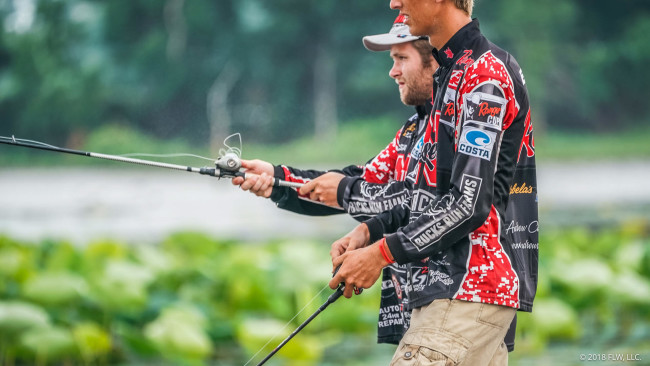 For the entire weekend Tusculum has had an oxbow all to themselves. The area has gator grass with a foot or two of water underneath. This morning when they arrived they fished the area extremely fast and did not catch anything. Since then they have taken a more thorough approach to the area. The decision to fish slower just paid off as they boated a 3-pounder.

ULM is still fishless. Currently, they are fishing a reed point with current down in Pool 4. They are relatively close to Tusculum, but fishing entirely different.

Nebraska is off to a good start – 4 fish for 5 pounds. Both DeShazer and Ebbers are cranking rocks on same spots they’ve hit over and over. This time they are absolutely alone. One of their fish came on a spinnerbait, which they restocked last night since their stockpile was dwindling down to the last one. They said they’ll likely both throw spinners once they fill a limit, since it’s been their big bite bait this week. 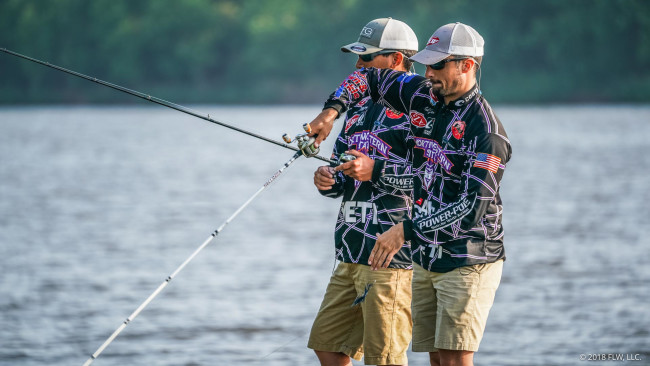 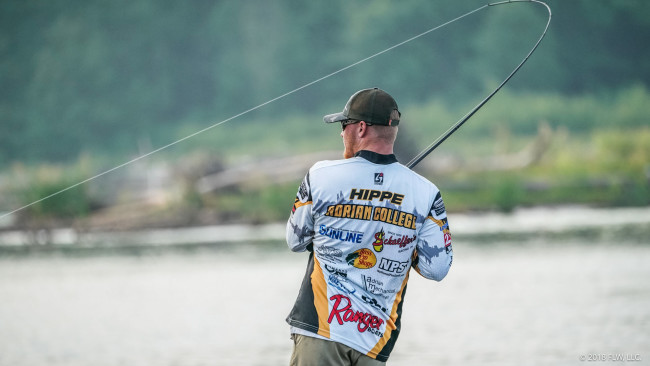 Adrian College’s Nicholas Czajka and Jack Hippe have the first reported fish of the morning – a 12” keeper. They also caught a small one that they needed to throw back. They are still working their honey hole just outside of Red River South Marina.

The guys from Northwestern State started on some rocks way north of takeoff that didn’t produce. After, they moved back to steep sandy banks and laydowns right outside launch.

Tusculum College just started throwing for the first time this morning. They are targeting pads with frogs and buzzbaits. As we idled past ULM’s starting spot we marked bait fish on our Lowrance HDS unit – certainly a good sign for the Warhawks. 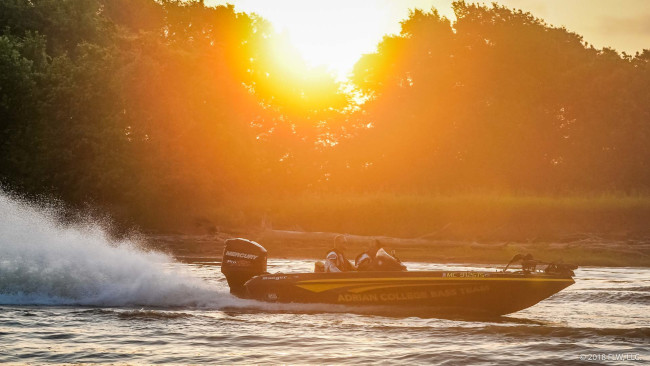 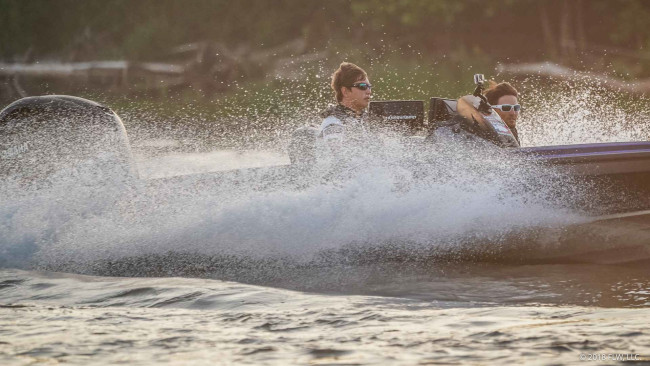 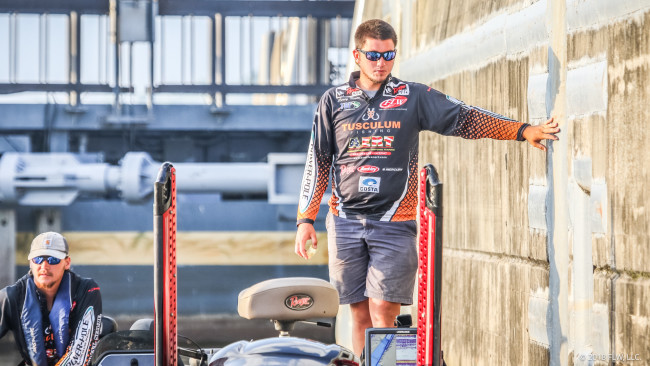 Pool 4 must still have the juice because the top-three teams are heading that way. In all, there are four teams sitting in the lock at the moment. We will get a more detailed report once they arrive to their starting spots. 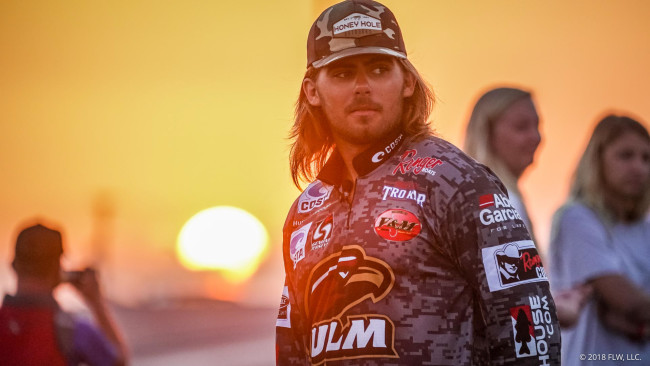 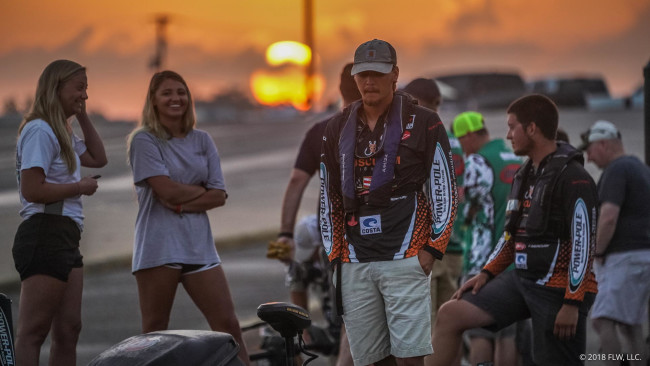 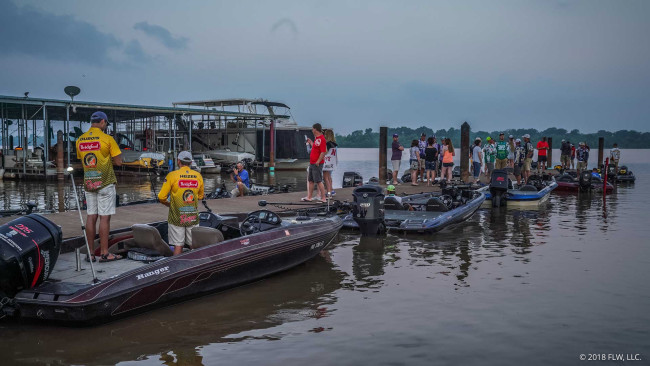 The YETI FLW College Fishing National Championship presented by Lowrance C-Map Genesis on the Red River has come down to the top 10 teams. University of Louisiana-Monroe anglers Thomas Soileau and Hunter Freeman have been leading from the get go. Not far behind is Nick Hatfield and Corey Neece of Tusculum College. Only a pound and an ounce separate the two teams. It could very well come down to a two-team shootout. Still, don’t count out anyone else in the top 10 – the Red has been stingy enough this week that a big bag could go a really long way.

With a thinned-out field, the anglers should have a lot of opportunity. Up in Pool 5, many teams have been hopping and popping from one stretch of rock to the next on the main river. Those sorts of areas will be a lot more open today. In fact, instead of running all the way down to fish in Pool 4, there’s a chance that ULM will stop and fish on the way down as they say they did on day one.

Neece and Hatfield of Tusculum have been fishing one backwater so far this week, and a handful of other teams have been in the backwaters too. For Tusculum, the question is whether their fish can hold up one more day. Backwater bass are notorious for running out, but from the sounds of it the Tusculum duo has managed their bass pretty well so far. If they can unload the wagon today they might be able to take over the lead from the super-steady ULM squad.