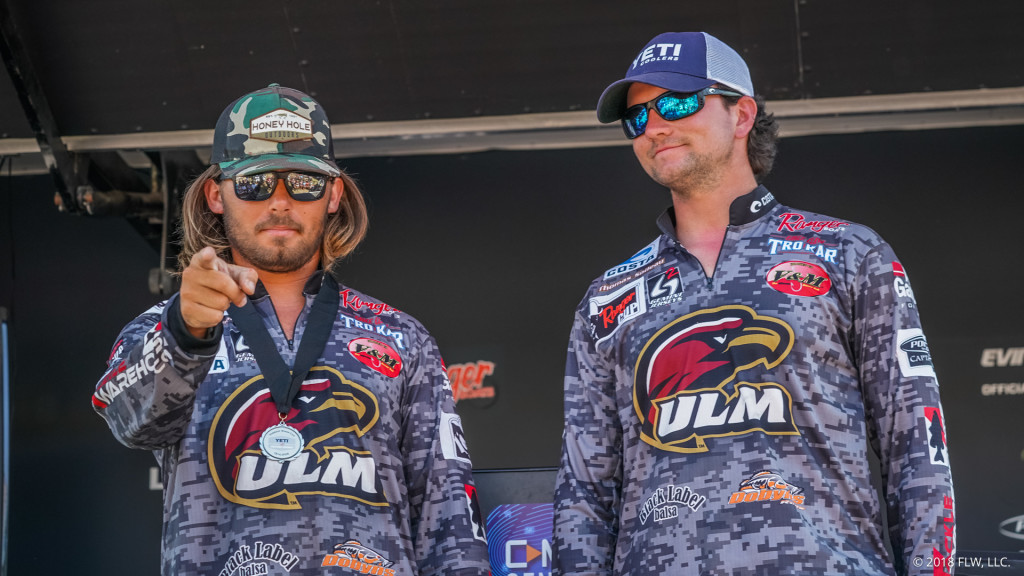 Admittedly, our use of phrases like “the grind,” “paying your dues” and “never give up” often approach cliché territory, but today, Hunter Freeman straight up defined those words with his gutsy fish-off victory at the YETI FLW College Fishing National Championship presented by Lowrance C-MAP Genesis.

One day after he and his University of Louisiana-Monroe teammate Thomas Soileau won the championship, the two faced one another in a single-day tournament for a berth in the 2018 Forrest Wood Cup at Lake Ouachita. Each angler fished out of a Ranger bass boat in the Red River South Marina bay, which had been off limits during the previous three championship days.

Freeman started his day with three small keepers and added a nice kicker of about 3 pounds mid-morning, but he struggled most of the day to find his fifth keeper. The junior business administration major found No. 5 after the noon hour and made a clutch cull that likely sealed his victory less than two minutes before the 2:15 check-in. 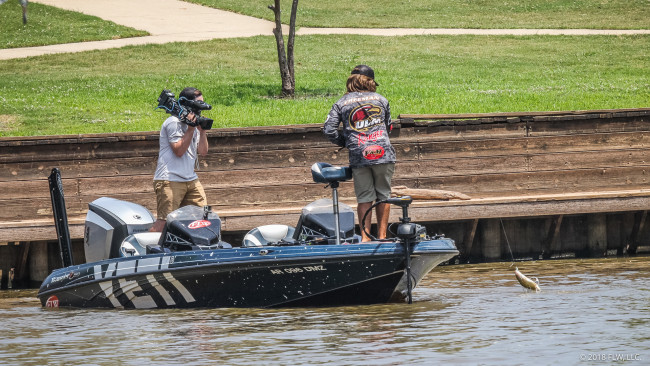 “I came back by the marina and threw a spinnerbait under a floating dock,” Freeman says of his last catch. “I had just told my cameraman that if this was back home on the Ouachita River, you should be able to catch one with the sun getting high.

Back at the dock, the official catch inspections foretold a very tight finish. On the weigh-in stage at Bass Pro Shops in Bossier City, La., Freeman’s limit went 7 pounds, 11 ounces. Soileau weighed next with a limit that went 7-9. After a dead-fish penalty, his weight was officially recorded as 6-9, but Freeman’s efforts earned the victory outright.

Freeman started his day in the bay’s stump-strewn north end. Egrets lining the windward bank told him this should be a fishy area, and sure enough, he tanked a trio of keepers in short order.

“When I caught those three in the first 15 minutes, I thought, ‘This is going to be easy,’” Freeman says. “After I got all the way into the back of the bay, I got stuck on a stump. When I finally got the boat free, I was going to bail on that area, but then I caught that kicker, so I thought I’d better stay.

“I caught that fish on the same balsa crankbait I had caught a lot of my fish on this week. But on the next cast, I splintered it on a stump. I tried to keep throwing it, but I guess the bait absorbed water and wouldn’t run right. It kept eating stumps and getting hung up.”

From there, Freeman moved to the mouth of the bay and filled his limit by pitching shallow wood with a 1/2-ounce ball-head jig with a Strike King Rage Craw trailer that he trimmed for a shorter profile. After that, he returned to the north end and made a small cull with a fish he caught off a rock jetty.

“That was weird because I backlashed with a jig, and as I’m pulling out the backlash, this fish comes up and jumps,” Freeman says. “I saw my jig trailer hanging out of its mouth, so I set the hook. That one barely, barely culled.

“Then on the way back in, I told my cameraman, ‘Wouldn’t it be something if I culled on my last cast.’ And it was the last cast.”

The spinnerbait Freeman used for his first three keepers and the late-day dock catch was a 1/2-ounce War Eagle Finesse Spinnerbait with a cole slaw skirt (white, chartreuse and orange).

“Every little boy’s dream is to fish in the biggest tournament there is, and that’s the Forrest Wood Cup,” Freeman says. “When they announced this tournament on the Red River, I said, ‘That’s my shot. If I’m ever going to make it, I have to do it.’

“I spent so much time and money up here practicing. To make it, it’s a dream come true. I’m not just going to show up at the Cup; I’m going to try to bring it and represent the whole College Fishing crowd.” 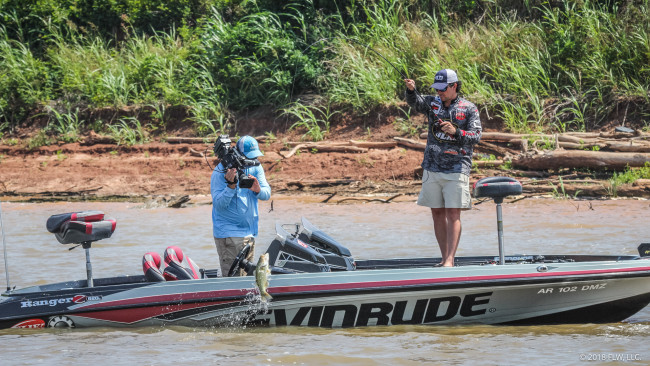 Soileau focused mostly on the bay’s southeastern bank and caught his fish on a Texas-rigged Big Bite Baits Fighting Frog (black neon), a 5/16-ounce shaky head with a green pumpkin Zoom Finesse Worm and a Strike King 1.5 square-bill in the sexy shad color. This lineup, he says, is his bread and butter on his Ouachita River home waters.

“As soon as I saw that bank, it reminded me of the Ouachita River, so I picked up the baits that I’d had a lot of success on in that river. Right away, with the first bite I had, I knew that all three of the baits I was throwing were going to work,” he says.

Of his partner’s accomplishment, Soileau says: “Hunter going on to fish the Forrest Wood Cup – I couldn’t be happier for him. He’s worked his tail off for this, and he deserves it.”