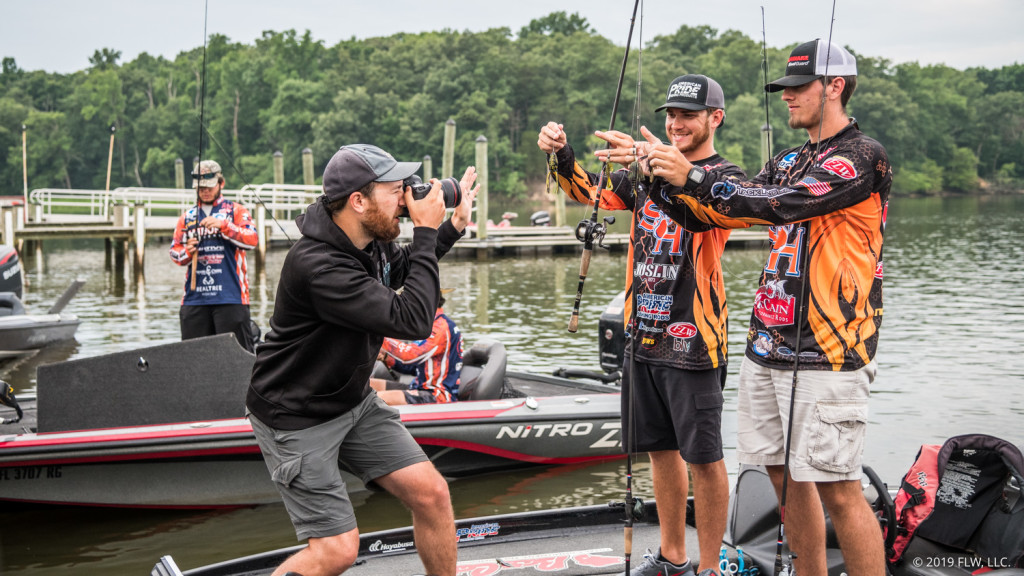 Competitors in the YETI FLW College Fishing National Championship presented by Lowrance undoubtedly took some cues from the top finishers in the T-H Marine Bass Fishing League (BFL) All-American the week before, but they also blazed some new ground. With better fishing overall and a better grass bite, a few more winding baits got mixed into the fray. If you’re looking to catch bass on the Potomac River, or really any eastern river with grass, you won’t go wrong with what’s below. 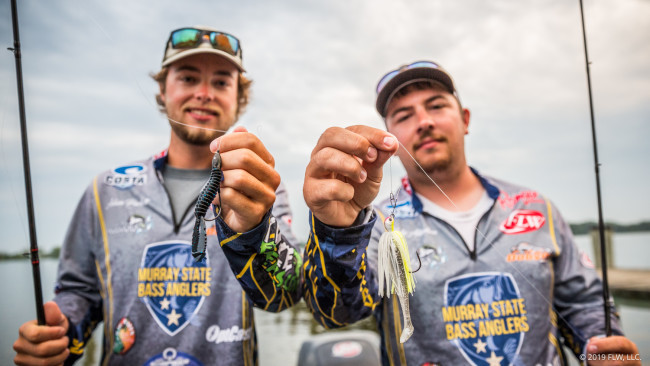 1. Earning the W by the skin of their teeth, the Murray State duo of Adam Puckett and Blake Albertson flipped with a black, blue and purple Reaction Innovations Spicy Beaver. To wind, they opted for a ½-ounce white/chartreuse Z-Man ChatterBait Jack Hammer with a Gene Larew Sweet Swimmer and a 3/8-ounce black and blue Z-Man ChatterBait Jack Hammer with a green pumpkin Lake Fork Live Magic Shad trailer. They also added a couple on a wacky-rigged Yamamoto Senko. 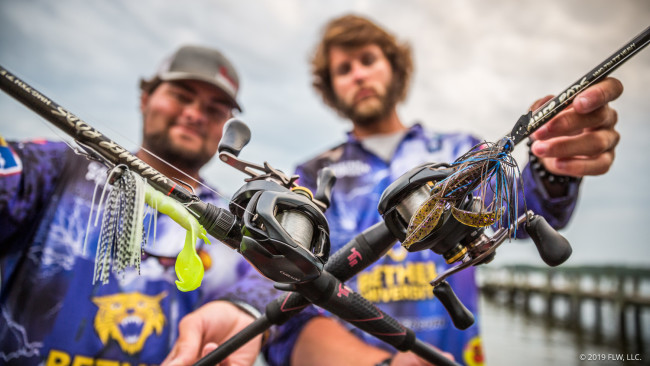 2. Wrapping up a second-place finish, Tristan McCormick and Dakota Pierce of Bethel used a Z-Man ChatterBait Jack Hammer some, but did most of their damage with a ½-ounce Strike King Thunder Cricket trailered with a Berkley Havoc Pit Boss. Throwing some shad colors and some black and blue and green pumpkin, the pair found their most productive Pit Boss color to be green pumpkin with purple flake. 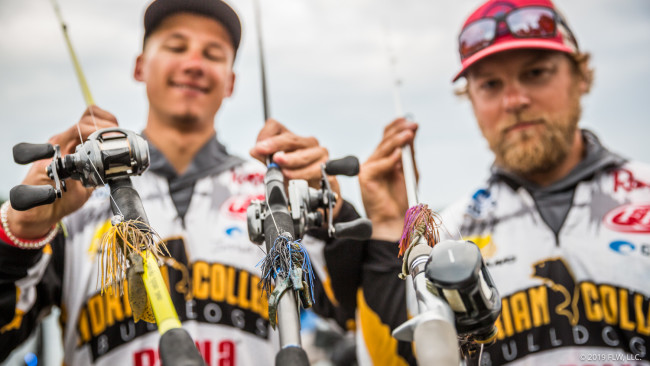 3. Fishing hard cover almost exclusively, the Adrian team of Jarrett Martin and Nickolas Marsh stuck with Missile Mini Flip jigs matched with either a Missile D Bomb or a Zoom Z-Craw Jr. on the back. On day one, they mixed in some fish on a Rapala DT in the 4- and 6-foot models. 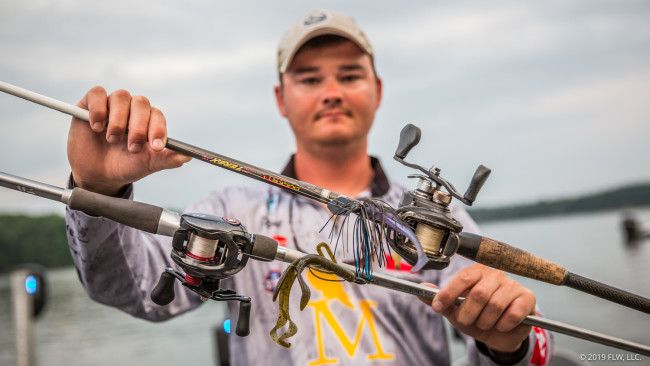 4. Fishing solo for the University of Montevallo, JT Russell caught his fish on a ½-ounce Texas rig with a Zoom Brush Hog and a 3/8-ounce Z-Man ChatterBait Jack Hammer. 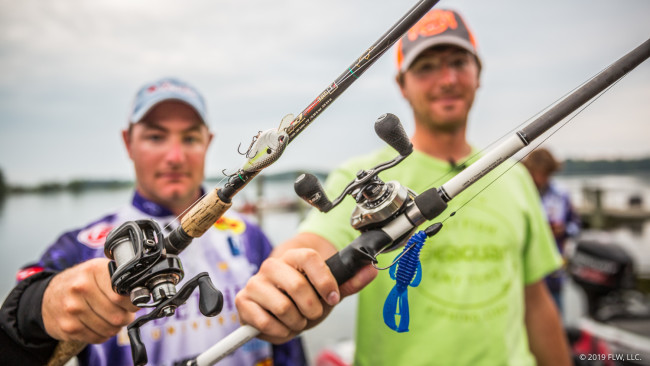 5. Dialing in on hard cover, John Coble Garrett and Brian Pahl of Bethel used a couple of crankbaits and a swampwater blue-colored Strike King Rage Bug for their fish. On the cranking side, the duo threw a SPRO Little John 50 and a Strike King 1.5 in chartreuse and black as well as shad colors. 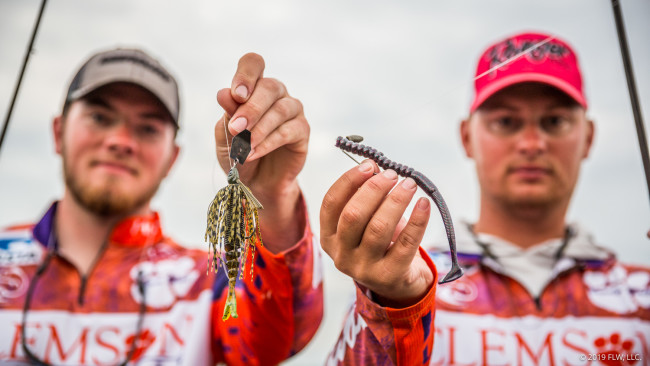 6. Brady Waits and Liam West of Clemson may not have won the championship, but they did beat all the teams from the University of Alabama in the field and primarily used winding baits to score a top 10. The first bait of choice was a 3/8- or ½-ounce Z-Man Project Z Weedless ChatterBait with a Yamamoto Zako, and the second was a swimming worm – either a  Zoom Magnum Ultra Vibe Speed Worm or a Berkley PowerBait The Wind Up worm. For the vibrating jigs, Clemson used basically every color from brown to green pumpkin to white. The pair fished the worms on 3/8- or ¼-ounce weights and found the best color to be tilapia. 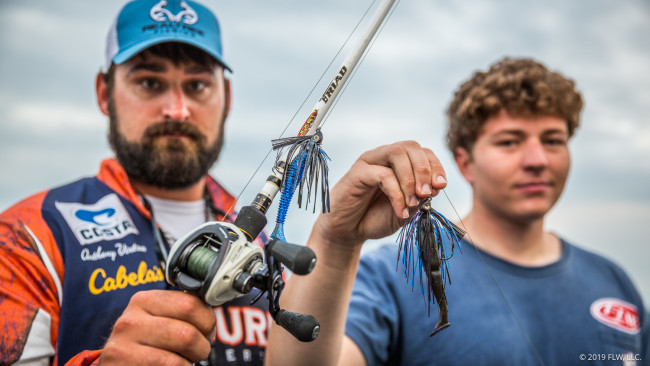 7. One of two Auburn University teams in the top 10, Julian Suero and Anthony Vintson stuck with black and blue swim jigs. One was a Strike King Hack Attack Heavy Cover Swim Jig and the other was a Gambler Southern Swim Jig. The duo went with a 3/8-ounce model for the Strike King and a 5/16-ounce for the Gambler and trailered them with Strike King Rage Swimmers and Gambler EZ Swimmers. 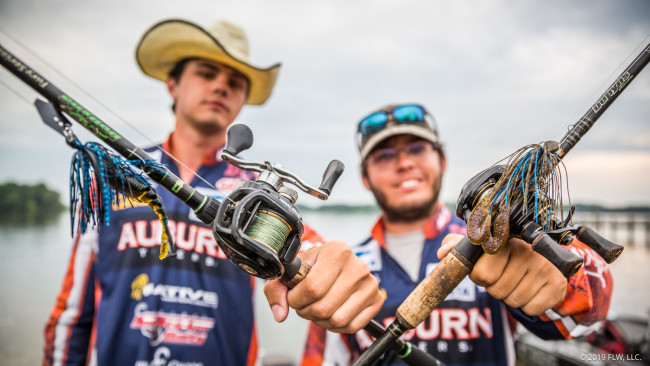 8. Also of Auburn, Sean Murphy and William Phillips rolled with a 3/8-ounce SpotSticker casting jig with a Zoom Super Speed Craw, a junebug-colored Zoom Magnum Ultra Vibe Speed Worm with a 3/16-ounce weight and the ever-popular combo of a Z-Man ChatterBait Jack Hammer and a Yamamoto Zako. 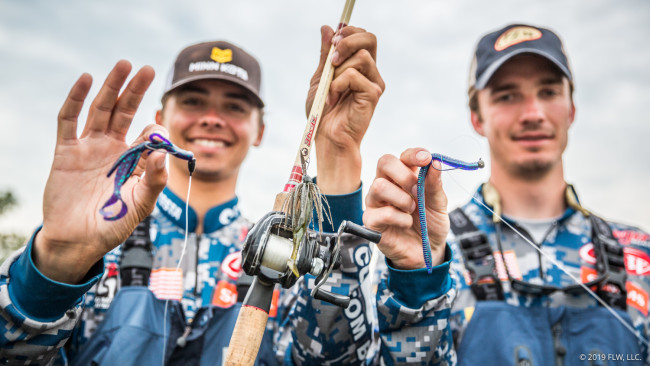 9. The day-one leaders, West Virginia University’s Thomas Raines and Nolan Minor fed ‘em a smorgasbord of baits including a junebug-colored Zoom Brush Hog, a Zoom Trick Worm on a shaky head and a  Z-Man ChatterBait Jack Hammer with a Reaction Innovations Skinny Dipper. 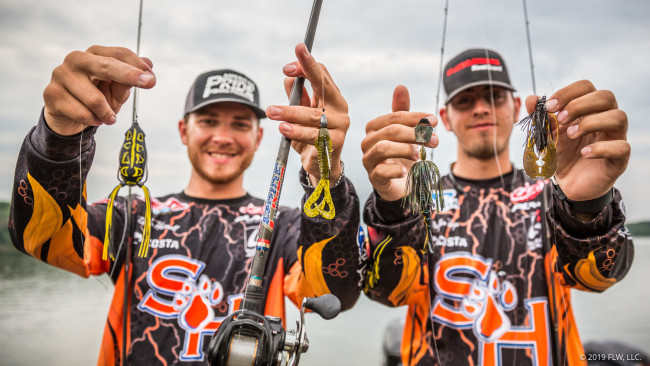 10. Wrapping up a top 10 in the National Championship, Dillon Harrell and Taylor Harp of Sam Houston State put a variety into play. Their squad included a SPRO Bronzeye Frog, a V&M J-Bug, a finesse jig with a Berkley PowerBait Chigger Craw and a Z-Man Project Z ChatterBait with a Yamamoto Zako.