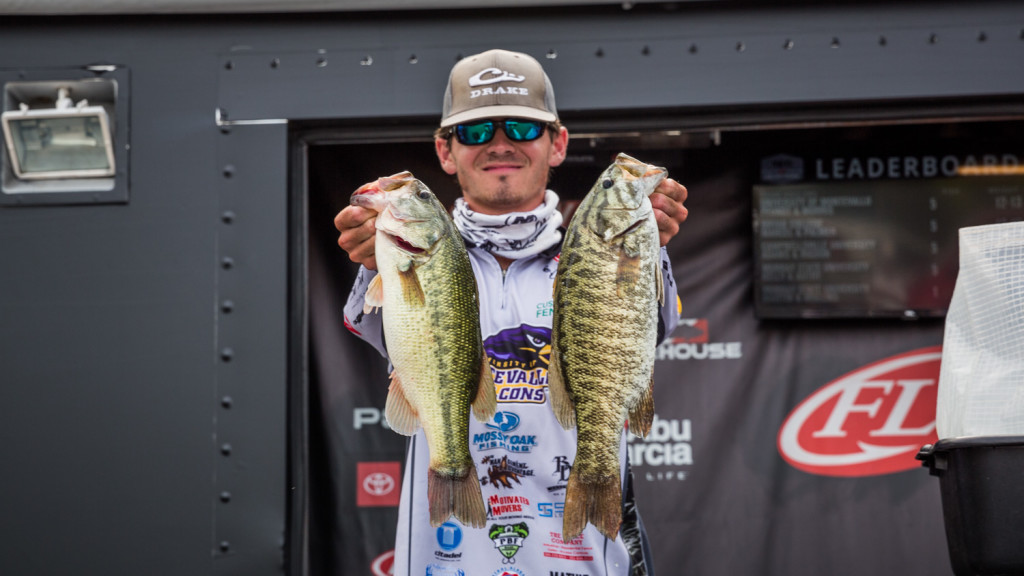 As expected, weights were down across the board on day one of the Abu Garcia College Fishing presented by YETI Open on Kentucky Lake. With high water during what’s typically a tough transitional time of year, it took just 12 pounds, 13 ounces for Grayson Morris and Jacob Pfundt of the University of Montevallo to grab the lead.

Still, don’t expect to hear the leading duo complain about that fact.

After what they describe as a terrible practice, Morris and Pfundt were happy with what they managed to scrounge up, junk fishing in one key area to weigh the biggest limit of the day. Even catching just five keepers on eight bites was enough to give them confidence going into the final day of competition.

“It was a grind. It was a grind for pretty much everybody,” Pfundt says. “We’re more confident than in practice for sure. We had this one spot that we didn’t touch after we got bit on it twice, and then we didn’t touch it until today and it worked out. We fished a bunch of stuff that looked the same, but we didn’t get bites off it, so we knew we were going to grind it out on this one spot all day. It worked out pretty well.”

The Montevallo duo’s one key area was a stretch of bank that they went up and down throughout the day, getting a bite going one way and then another coming back. Most of those bites came up shallow, though not on any particular structure or cover.

“We’re throwing a bunch of topwater baits and covering a bunch of water on shallow banks with some cover on them and just going down it,” Morris explains.

Between passes, Morris and Pfundt would also stop on some brush piles in 15 to 25 feet and slow down with a Zoom Ol’ Monster and a jig, but those brush piles never really produced much they could weigh in. Most of their bites came “up shallow on a topwater.”

As for day two, the leading anglers are confident enough in their approach that they intend to do the exact same thing tomorrow. Junk fishing for five good bites can be hit or miss, but Kentucky Lake isn’t exactly churning out any better options right now.

“I think we’re going to do the same thing [tomorrow],” they confirm. “Those fish we were catching up shallow on topwater, there were multiple fish with some of them. If we run the same stuff tomorrow and hopefully get those bites, we’ll hopefully have close to the same bag again.” 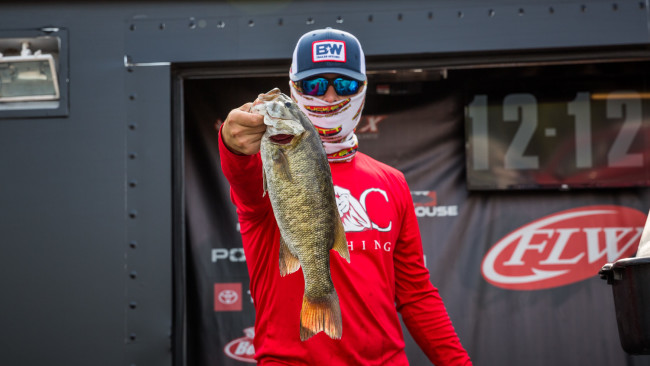 In stark contrast to Morris and Pfundt, the second-place team of Matt Marcel and Hunter Palmer of Bryan College had a pretty decent practice, yesterday especially. After finding a concentration of fish, the duo opted to move on in search of other productive waters, but that area they found yesterday really aided in catching 12 pounds, 12 ounces on day one of competition.

Like much of the field, Marcel and Palmer tried their hands at some topwater action to start the day, but it never really amounted much, so they decided to slow down and start dragging.

“Topwater really never played a part for us today,” Palmer says. “We gave it a try because we had a little action in practice. We were fishing a lot of flats and then we were fishing some deeper banks and stuff like that – anything between a Carolina rig and jig. Those were our main two baits today."

Also unlike the leading Montevallo anglers, Marcel and Palmer actually caught some numbers on day one, though not all of their fish measured.

“We actually caught quite a bit of fish today,” Palmer says. “We probably caught maybe 13 to 15 fish. We caught about seven keepers. Some of the other fish were right on the line. For the most part, most of our catches pretty much counted. At least half of them were keepers.”

The Bryan duo tried the backs of creeks and pockets in practice without much luck, so they started fishing steep banks and some flats to find the area they fished in on Wednesday. That area – and their ability to adapt to the conditions – gave Marcel and Palmer plenty of confidence going into the final day.

“It really boosted our confidence,” Palmer says. “We said we’d be happy with just a limit considering how tough the fishing’s been. When we realized we had almost 13 pounds, that really boosted our confidence and especially in the spot, because we lost some fish that could have boosted the weight of our bag today. we’re hoping it’ll pan out tomorrow to where we’ll have equal or even more weight.

“We’re hoping for the best. We’re swinging for the fences tomorrow and hoping it all goes as planned.” 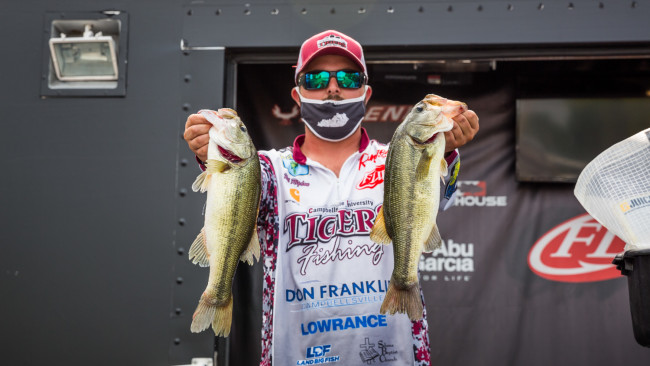 After catching just one keeper in practice, Wil Rigdon and Grant Adams of Campbellsville University decided to just strap a bunch of rods on the deck and go fishing on day one. They have 12 pounds, 3 ounces of bass and a third-place day to show for it.

While other anglers were looking for specific depth rangers or structure or cover, Rigdon and Adams just fished anything that looked good to them.

“We run-and-gunned a bunch,” Adams says. “We fished everywhere from 20 foot to 2 foot. There wasn’t really any area that was more specific than others. We found one area where we caught three pretty quick, but the rest of our limit we ran around and caught one here and one there. We only caught seven keepers all day long.”

They were the right keepers, though, and they came on a bunch of different baits.

In fishing both deep (brush piles) and shallow (just about anything else), the Campbellsville pair employed multiple variations of jigs, lipless crankbaits, Scroungers, 10-inch worms and squarebill crankbaits. The slow, dragging baits were for deeper water and the moving baits got the call in the shallow areas.

While it may seem like Rigdon and Adams were scrambling on day one, they did have one primary factor on which they based their strategy.

“The main thing is you’ve got to be around the shad,” Adams says. “One key thing we found is we had to have some deep water pretty close to wherever we were.”

While some of their areas were pressured, Rigdon and Adams say they have some sneaky spots, and they intend to utilize them all tomorrow and approach the final day just as they did the first.

“I told people the last two days that it’d be a miracle if we caught a limit,” Adams adds. “We did, so as far as tomorrow goes, it’s definitely going to be tough but doable. We’re going to stick with the same game plan and see what happens.”