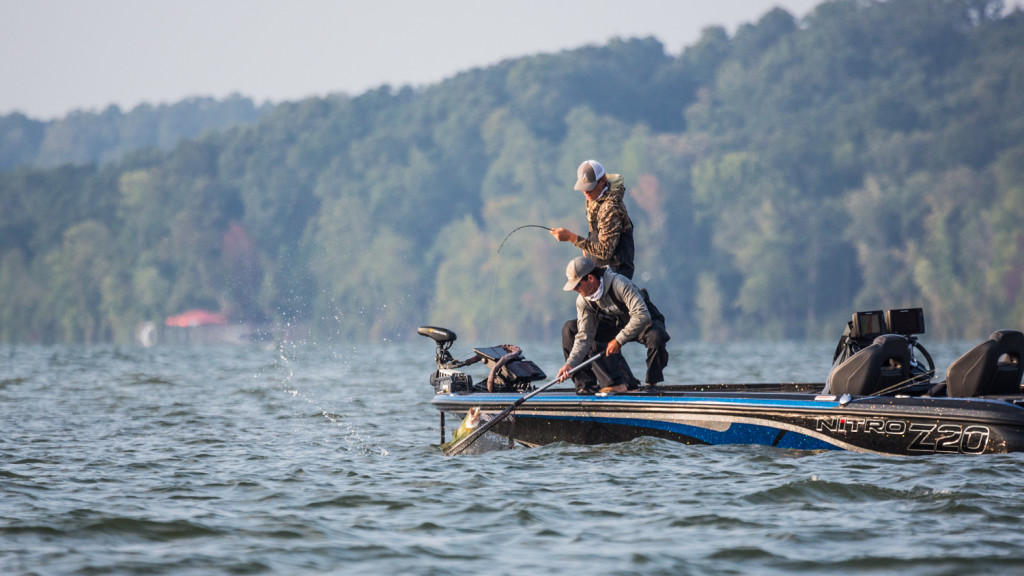 Kentucky Lake has the potential to churn out some big bags – look no further than the 2019 Abu Garcia College Fishing presented by YETI Open, when 21 teams weighed in more than 20 pounds on day one alone – but the 2020 iteration wasn’t as friendly to the college anglers who took to her waters this week.

High water meant scattered fish that otherwise wanted to be grouping up and transitioning toward deeper water. Instead of mega-bags caught on offshore bars with topwaters, many in the top 10 had to scramble to catch their fish, junk fishing around the northern end of Kentucky Lake – and even into Lake Barkley.

Here’s the skinny on how the top 10 teams caught their fish this week and what they caught them with. 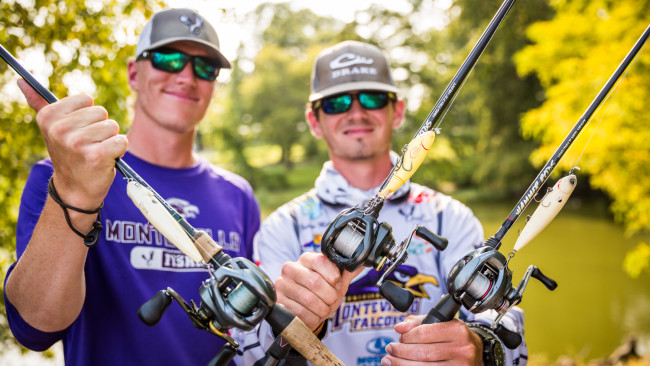 To earn the win, Grayson Morris and Jacob Pfundt of the University of Montevallo spent most of their tournament time working one bank in one productive area in which they were able to coerce multiple keeper bites during practice. Covering lots of water, the duo leaned on a Reaction Innovations Vixen and a 130-size River2Sea Whopper Plopper (bone color) and rarely had any other rods on the deck. Morris and Pfundt did poke around some deeper brush both days, but they didn’t waste much time in returning to the winning bank that churned out 25-4 over two days and gave them the win by 1 pound, 15 ounces. 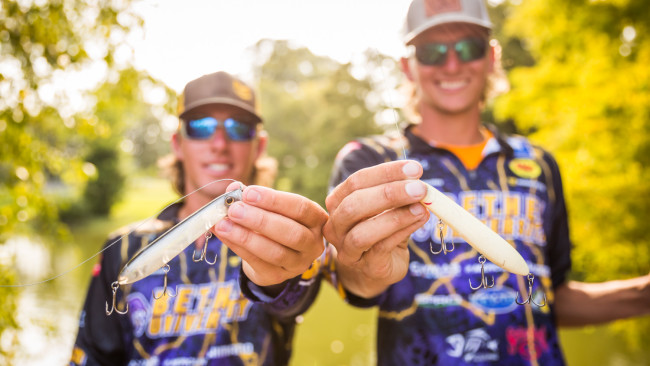 Bethel University’s Joseph McClosky and Ryan Winchester were one of only three teams to weigh in nine fish over two days of competition (Morris and Pfundt alone weighed in 10 fish). Their nine were all good fish, though, and they caught them all in one specific area at the north end of Kentucky Lake using two different baits: an Evergreen walking bait and a Strike King Thunder Cricket paired with a Yamamoto Swim Senko trailer. McClosky and Winchester used those baits to target schooling bass on wind-blown, main-lake flats. 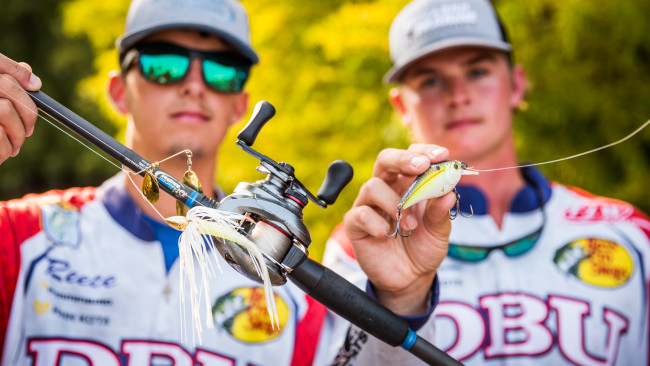 On day one, Mark Harris and Reece Martin of Dallas Baptist University spent their day targeting docks, primarily catching their fish on a 6th Sense Crush square-bill (chartreuse-and-white) and various flipping baits. They went back to that same stretch of docks on day two and found their fish had moved to the back of the docks. Rigged on a 7-foot, 3-inch medium-heavy Alpha Angler Zilla rod, they used spinnerbaits to secure their tournament-best 14-pound bag to lock up third place. 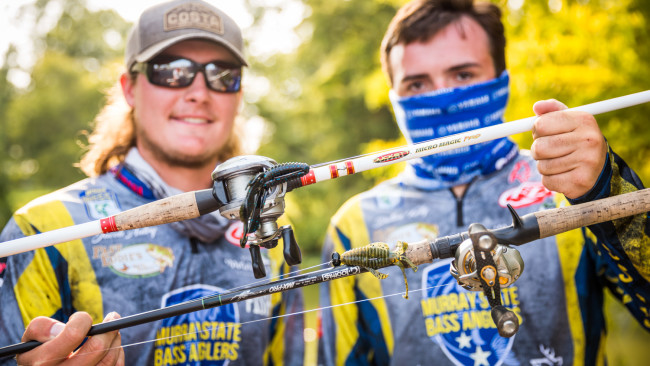 For the most part, Dalton Kelly and Jacob Autry of nearby Murray State University spent their time between takeoff (Moors Resort and Marina) and the Kenlake bridge. They junk fished in the mornings until the sun came up, when they would move to some offshore bars and flats littered with stumps and brush in 3 to 15 feet of water. While they say their stumps didn’t start producing well until around 1 o’clock each day, they found enough fish to weigh in 22-12 for the tournament, which they caught primarily using swing-head jigs tipped with Strike King Rage Bugs (green pumpkin and blue swirl) and Reaction Innovations Kinky Beavers (magic craw swirl) rigged on G. Loomis IMX Pro Jig/Worm rods.

After catching a pair of fish on offshore bars with topwaters on day one, Harbor Lovin and Luke McKinney of Murray State had to adjust to the changing conditions on day two when winds created water too rough to effectively run their pattern. They switched gears and primarily fished various structure in the backs of creeks with a 3/8-ounce white Z-Man ChatterBait Jack Hammer with a 5-inch Jenko Tremor Shad trailer and Strike King tube with a 2K Jigs tube head.

One of two teams that ran to Lake Barkley this week, Matt Marcel and Hunter palmer weighed in 12-12 on day one by cranking and flipping riprap in a “big rock cove.” Their square-bill of choice was a Strike King KVD 1.5 in citrus shad and the jig they employed was a Mean Mouth Lures flipping jig in sprayed grass a whiskey craw colors with bama craw and green pumpkin Strike King Rage Tail Craw trailers. Their pattern fizzled on day two, but Marcel and Palmer say their fish were still in the area – they just couldn’t get them in the boat. 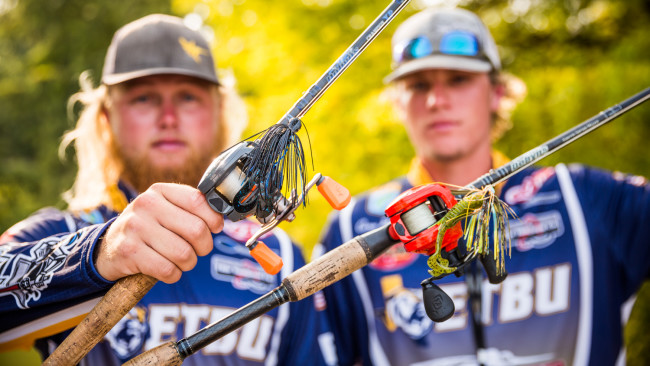 Kaden Proffitt and Cason Ragsdale of East Texas Baptist University weighed in just two fish on day one, but with nothing else in their bag of tricks, the pair headed back to those same docks in Jonathan Creek on day two to find very little fishing pressure in the area. Seeing bait “just about everywhere,” Proffitt and Ragsdale focused specifically on a stretch of docks that had what they interpreted on their electronics as an old channel swing from a silted-in creek bed in front of them. There, they employed black-and-blue V&M flipping and swim jigs with V&M J-Bug trailers fished on Dobyns 744 Champion XP and 746 Champion Extreme rods.

Going to school at nearby Bethel University, both Tristan McCormick and Steven Mills are familiar enough with Kentucky Lake to know where the most productive areas are. As such, they hung around the Paris Landing area both days (specifically near Cypress Creek and Big Sandy), though they say they fished their way all the way down in the mornings. McCormick and Mills caught their fish on shallow main-river bars using the 110 and 130 sizes of River2Sea Whopper Ploppers (bone) fished on Smoke Creek rods and Shimano reels. 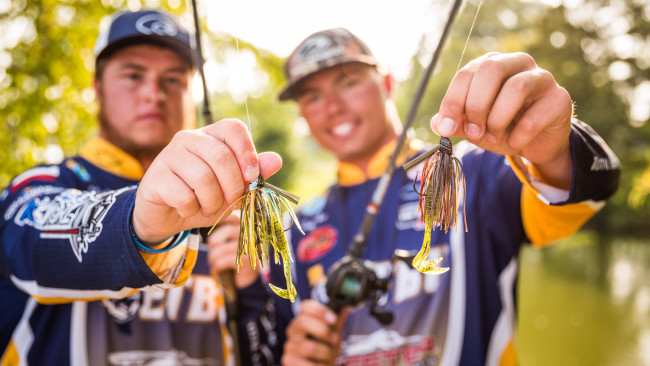 Cody Ross and Cameron Tullis ran a unique pattern this week, opting to bounce around from stake bed to stake bed between Jonathan Creek and the dam. They say that in order to get bit they had to find the stake beds all the way in the backs of the biggest pockets. Muddy water was better, as were the stake beds with the most tightly grouped stakes. To catch those fish, Ross and Tullis wielded American Pride rods and Lew’s reels with Seaguar line attached to either a 3/8-ounce V&M flipping jig or a 1/2-ounce V&M The Pulse Pacemaker swim jig (V&M J-Bug trailer for both). On the final day, the ninth-place team caught all three of their keepers off the same stake bed after making multiple passes throughout the day. 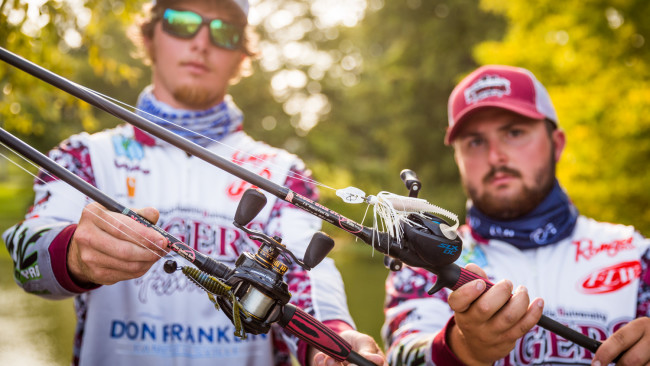 Wil Rigdon and Grant Adams ran to Lake Barkley both days of the tournament. There, they took advantage of Barkley’s stained water and caught three of their five day-one keepers out of a ditch in 10 feet of water, though they hit that same ditch three times on day two and never got a bite. With that spot having dried up, Rigdon and Adams went junk fishing for the rest of their keepers, primarily targeting sunken roadbeds, stake beds and brush. To catch their fish, the Campbellsville duo used a 3/4-ounce swing-head jig paired with a green pumpkin blue Strike King Rage Bug and a white 1/2-ounce Strike King Thunder Cricket with a 3.8-inch Keitech Swing Impact FAT trailer. They also used Dixie Custom Rods and Seaguar Red Label line.