See what lakes are on the schedule in 2021 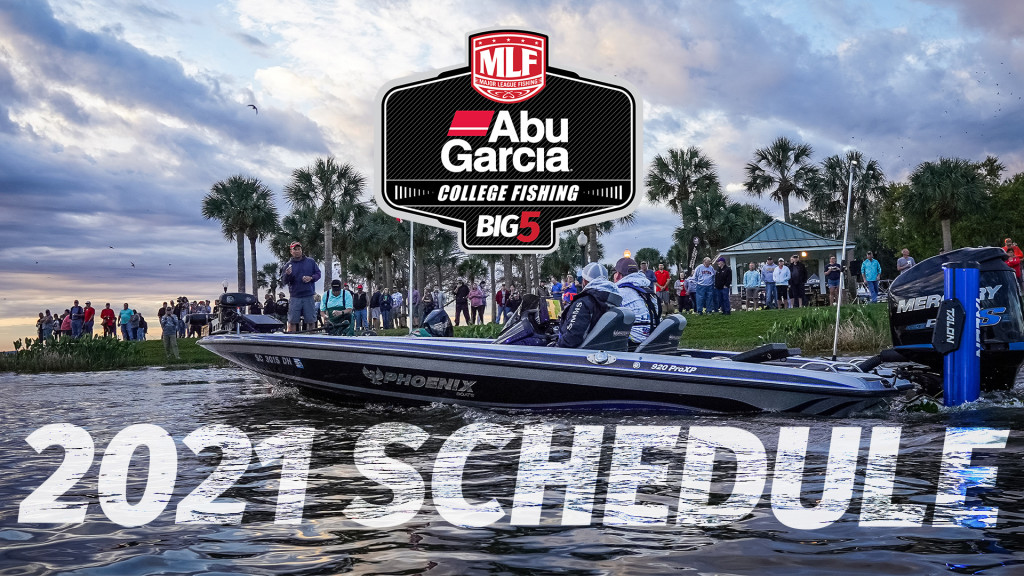 Major League Fishing (MLF) announced today the schedule, rules, payouts and entry dates for the 2021 Abu Garcia College Fishing season, culminating in the Abu Garcia College Fishing presented by YETI National Championship presented by Lowrance on Grand Lake in Grove, Okla., as well as advancement opportunities for anglers to compete as boaters and co-anglers in the 2021 Toyota Series Championship.

“We are excited to welcome back familiar faces and meet new students during the 2021 season,” said Kevin Hunt, MLF BIG5 Senior Director of Tournament Operations, College and High School. “The chance to qualify for MLF College Faceoffs and advance to the Toyota Series Championship provide our anglers multiple avenues to hone their craft and work their way up through the MLF BIG5 circuits. With national livestream and television coverage, we are thrilled to provide college anglers the very best opportunities to elevate their schools, sponsors and personal brands. We expect 2021 to be our most successful college fishing season yet.”

Registration for teams wishing to compete in the 2021 Abu Garcia College Fishing tournaments will be accepted beginning at 8 a.m. CT December 14, 2020, for teams from school clubs represented in the 2020 College Fishing National Championship. All other teams may register beginning December 15, 2020. Teams can register at FLWFishing.com or by calling (270) 252-1000. The entry fee remains the same for 2021 – $75 per team for teams who enter prior to onsite check-in and $100 for teams who enter onsite.

The 2021 Abu Garcia College Fishing presented by YETI National Championship presented by Lowrance is on Grand Lake in Grove, Oklahoma, March 3-5, and is hosted by the Grove Convention and Tourism Bureau and the City of Grove. Held in conjunction with REDCREST, the 2021 championship will provide unique networking opportunities for college anglers, Bass Pro Tour pros and potential sponsors.

Hosted by Grove Convention and Tourism Bureau & City of Grove