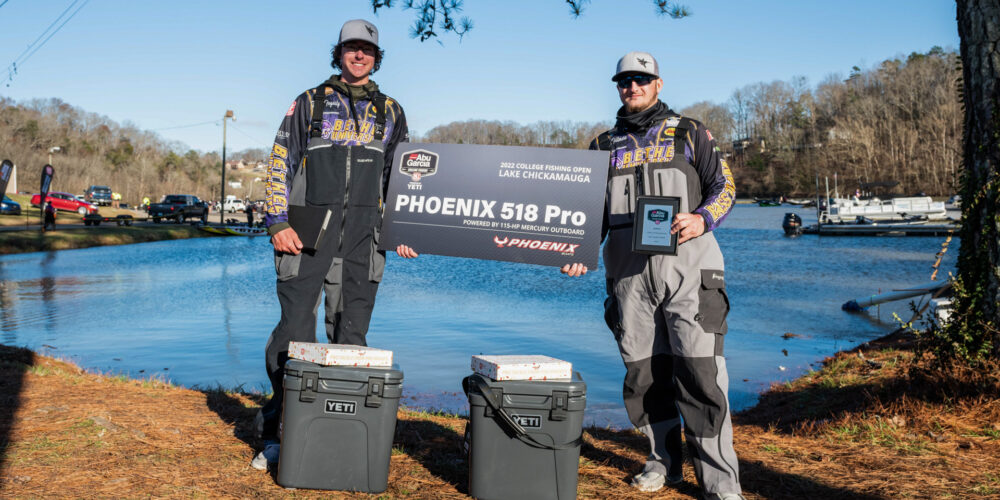 DAYTON, Tenn. – The team of Hunter Fillmore and Dylan Fogarty from Bethel University came into Day 2 of the Abu Garcia College Fishing Presented by YETI Open on Lake Chickamauga with a pretty decent lead and they left it with a huge margin of victory. Tallying 22 pounds, 10 ounces on Day 2, for a 45-9 total, the duo won with more than a 14-pound margin. For the win, the pair earned a new Phoenix 518 Pro with a 115-horsepower Mercury outboard and a berth in the 2023 National Championship. Notably, the win is the first for Bethel in the prestigious College Open, which is one of the few titles the school lacked in college fishing.

On Day 1, the Bethel duo started on a community hole, but ended up catching almost all their weight from a small patch of grass in shallow water near the main river. On Day 2, the pair ran straight to the juice and found it a little bit different.

“We pulled up first thing, as soon as we got there we noticed the water was a lot dirtier,” said Fillmore. “Yesterday it was clean, it was the cleanest part of the lake I think. I guess the current got to it, and it was very dirty. The water had come up another foot and a half for so, which was pushing that grass deeper and deeper, so now it was in 8 feet of water or so.”

After a few casts with their staple lipless from the first day, they swapped over to vibrating jigs and went to work.

After milling around nearby and striking out, they got back on the juice to close it out.

“By the time we got back out there, it was probably 11 or 11:30,” said Fillmore. “Then, I caught another 4, and the next cast Dylan caught that 9-5, and then that was it. We never actually caught [another keeper].”

Firing a Z-Man/Evergreen ChatterBait Jack Hammer and a Queen Tackle Switch Blade Tungsten Bladed Jig in ½-ounce models, both anglers used baits with red skirts and a Yamamoto Zako in white, which they dyed orange. Notably, the 9-pounder fell for the Switch Blade.

“With the water getting deeper over the top of the grass, you could barely move it,” said Fillmore. “I wish we had some ¾-ounce [vibrating jigs], so we could reel it faster. You just had to throw it out and let is sink and barely reel it.”

How they found the winning spot was pretty cool, as it turned out to be the same place they caught a 4-pounder in a Southeastern Conference event in the fall.

“We pulled up there off history not expecting much, and saw that clump on LiveScope,” said Fogarty. “We went another half mile and that was the only thing there.”

“This patch of grass was eelgrass, it was the only eelgrass we found, and it was bright green,” said Fillmore. “It was kinda hidden a little bit, you’d have to graph a mile to find it.”

Bethel has done a lot in collegiate fishing, but until today, no team had ever taken down the win at the Open, despite a number of events held on Kentucky Lake in Cole Floyd’s salad days.

“It feels pretty good, we definitely weren’t expecting to win by that much,” said Fillmore. “We thought we had a pretty good chance after [Dylan] caught that last big one, but I wasn’t expecting that.”