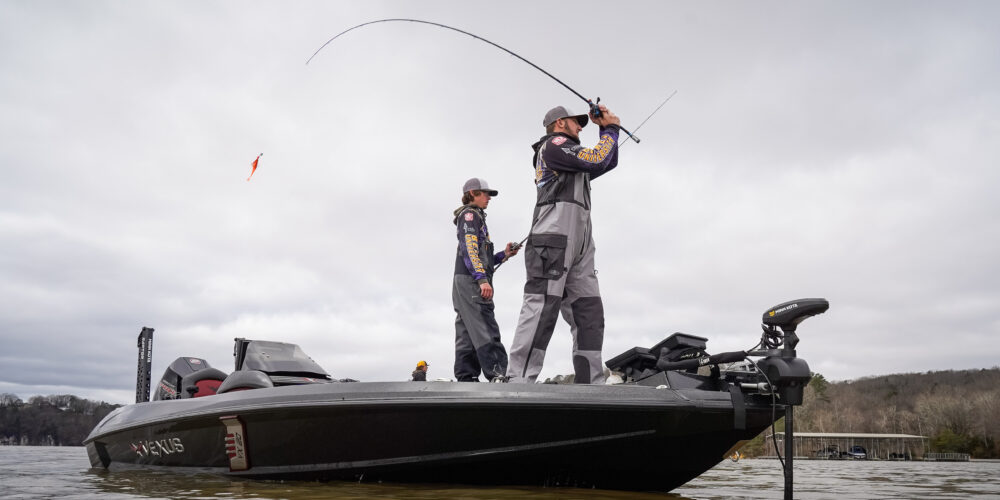 DAYTON, Tenn. – Day 2 of the Abu Garcia College Fishing Presented by YETI Open on Lake Chickamauga got underway with much colder temperatures than Day 1, but the results on the water seem to be about the same. The bad weather has some teams catching them, and a lot of teams not.

Leading the way, Hunter Fillmore and Dylan Fogarty of Bethel University have picked up where they left off. With over 22 pounds in the boat including a 9-pounder, the pair seem well on the way to a win. Like on Day 1, almost all their damage has been done off one small patch of grass.

Running up and locking to Watts Bar, the second-place team of Lane Bailey and Justin Eggers of Catawba Valley Community College had a small limit around 10 o’clock. That’s a good start, but not what they need to run down a win.

In third, Conner Giles and Christian Wright have two quality smallmouth in the boat, which is a great start on the day. In fourth, Reagan Nelson and Collin Reyes of Tarleton State-Stephenville picked up two fish early throwing vibrating jigs in cuts off the main lake.

Starting the day in fifth, Bryan Bergeron and Heath Pinell of LSU have hammered them on Day 2, but they haven’t found the quality. Despite catching a ton of keepers, they’ve only got 10 or 12 pounds in the boat. Certainly enough to make the National Championship, but not nearly what they need to run down a W.

One of the three University of Montevallo teams in the Top 10, Adam Carroll and Trey Dickert were cranking and flipping up the lake and had one in the boat when we found them. Also from Montevallo, Kyle Bahr and  Aaron Cherry were fishing in Possum Creek when we found them and sitting on zero fish.

So far, it looks like weigh-in might be similar to Day 1, with lots of teams coming shy of a limit. Still, it is Chickamauga, and there’s a new Phoenix boat on the line, so there’s sure to be some excitement along the way.