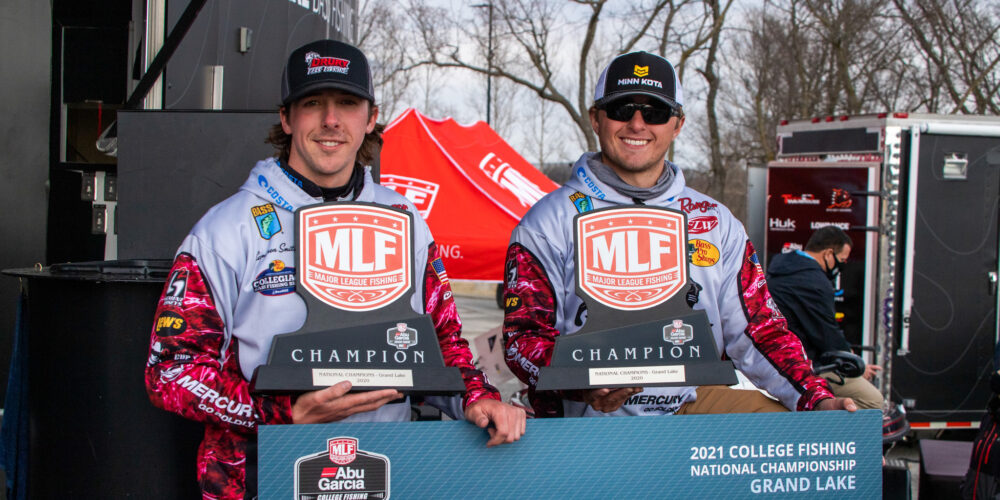 The Drury University team of Cole Breeden and Cameron Smith weighed 14 pounds, 10 ounces on the final day to lock down the win in the Abu Garcia College Fishing presented by YETI National Championship presented by Lowrance on Grand Lake. After leading on Day 1, the Drury duo dropped to third on Day 2. Weighing the biggest bag on the final day, the pair tallied 41-10 on the week to earn their second MLF win and the first national title for Drury. For their win, they’ll take home a new Phoenix boat and both anglers get the chance to fish in the Toyota Series Championship this fall on Pickwick Lake.

All week, the duo ran down the lake to fish jerkbaits in creeks on the lower end. While some teams focused on specific pieces of brush with jerkbaits and some teams caught fish deep on crappie jigs, Breeden and Smith found a pattern focusing on key stretches of shallower creeks and pockets.

“It surprised us,” says Smith of their shallow pattern. “This lake is a lot like Lake of the Ozarks, one of our home lakes. If we were there right now, we’d be fishing secondary points all day, and maybe some wind-blown steep banks. This week, we just found them shallow, we think it might have had something to do with the sunny days, warming up that water and making them a little more active than the ones out deep.”

Mostly focusing on the steep sides of shallow areas, the pair sometimes worked their jerkbaits with the rod tip up to keep them out of the dirt. It was a pattern they dialed-in during practice, and it let them move around a bit more than some other teams that simply had one area or a few key pieces of brush or rock.

“We were out there with LiveScope, and you could see ‘em on the graph if they were out a little deeper,” says Smith. “A lot of times, we were throwing out on steeper, rocky banks, leading back into pockets. Kinda that first big bend going back, we’d throw our jerkbait within 3 feet of the bank just to get it down enough to get to them. Usually, they were hanging on that first break of the bank, so you’d pop the jerkbait over that, and by the time you could see it on LiveScope they’d be following it out into the middle of the cove to you. Usually, they’d eat it about halfway back.”

Making use of their Ozark savvy, the Missouri duo didn’t just fish bare bank. They also targeted the right kinds of stretches behind docks and mixed in a few other targets as well.

The pair ended up being extremely particular about their jerkbaits, from both a tackle and retrieve perspective. Swapping to 12-pound-test fluorocarbon the night before the event helped them keep their baits shallower, and a positive buffet of baits kept the fish biting.

“We threw a lot of different types and brands, mostly dependent on the color and the size,” says Smith. “We threw a Jackall Squad Minnow 115 and a shallow Strike King Jerkbait. We threw the Strike King a lot on the sunny days. We were throwing a Megabass Vision 110 quite a bit today.”

Their retrieve was also key, and LiveScope helped them figure it out in practice.

“We had to find a middle ground,” says Smith. “We found out looking at the LiveScope that they didn’t want it fast, they were too lethargic. But, if you worked it too slow, they got right up on it and they could tell it was fake. The sun was shining and they could see it real easy. You could see them lose interest and turn away and go back to the bottom. So, we found that middle ground, a one, one, two, one, one, two, cadence with about 1-second pauses between each rip.”

As you’d expect, when it was all over at weigh-in, the pair was ecstatic about their win.

“It feels amazing, we were so blessed,” says Smith, who is a senior majoring in biology. “This week in general is a blessing, this just tops it off. It’s truly amazing, I’m lost for words.”

“The opportunity to even fish a championship doesn’t happen very often,” says Breeden, who is a junior marketing major. “Every championship we have fished, we’ve just been mad when it is over.”

“We’ve done well in smaller stuff together before, but every time we get to a national championship, either we don’t do well, or we do well in practice and choke in the tournament,” says Smith. “This one, it just all came together.”

Weighing over 13 pounds each day, Breeden and Smith closed out the win thanks in large part to a hot morning.

“We did exactly what we wanted to do,” says Breeden. “We had a certain bank that pretty much produced all our fish today. We didn’t even hit it the first day of the tournament, it was just one of our spots we were going to visit at some point. We got quality bites on it the second day, we decided to start there this morning, and they were biting. We lost a couple fish that would have helped us, but that doesn’t matter now.”