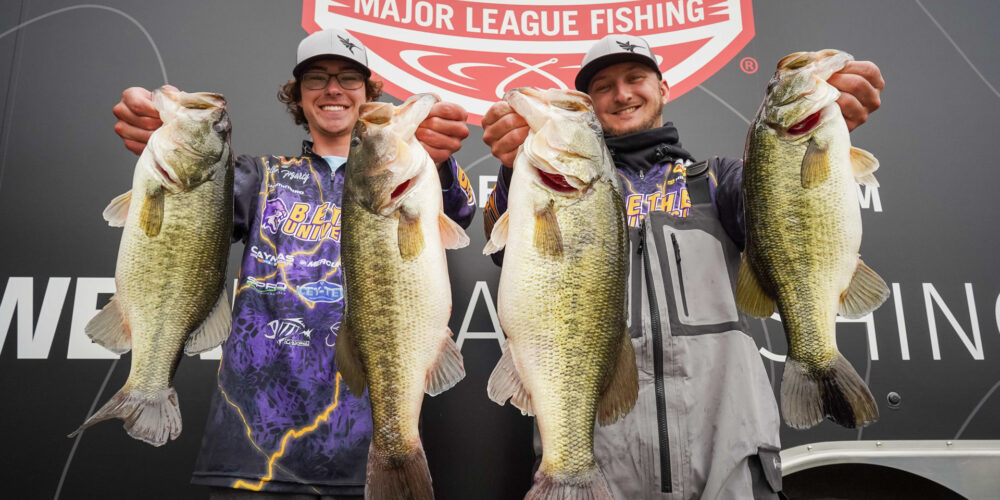 DAYTON, Tenn. – Contrary to hopes and dreams, the fishing on Day 1 of the Abu Garcia College Fishing Presented by YETI Open on Lake Chickamauga was pretty brutal. With tons of teams failing to limit and only a few even scratching into the high teens, it means qualification for the National Championship is almost anyone’s game on Day 2. Solidly in the lead, with the help of a 7-pounder, Hunter Fillmore and Dylan Fogarty of Bethel University tallied 22 pounds, 15 ounces on the day. Almost 3 pounds ahead of second-place Lane Bailey and Justin Eggers of Catawba Valley Community College, Fillmore and Fogarty probably only need to catch a couple of fish to lock up a berth in the natty, and have a great head start on a big win in the Open.

As boat No. 3, Fillmore and Fogarty got their pick of the litter after their run down the lake. Both sophomores majoring in Business, the pair started on a community hole to get the ball rolling.

“We had two or three spots we were really counting on to produce all our bites,” said Fillmore. “We pulled up to the first one, it started off slow. We stayed there for probably 2 hours, it ended up being a community hole. We ended up catching two, Dylan [Fogarty] caught one that was about 5.”

Next, the pair made a move to some main-lake grass to wind a Jackall TN around a little bit. Things got good in a hurry from there.

“Then we went over to our second spot, just a little patch of grass, and it went on from there,” said Fillmore. “We caught one, and lost one, and then they quit biting and we pulled away. We came back about 20 minutes later and I caught that 7-10 and we finished our limit.”

Culling twice off the same spot at the end of the day, the pair think they’ve got something special.

“It’s a little tiny area, no bigger than the boat,” said Fogarty. “We’re just repetitively casting there, and they’re just stacked up in that spot.”

“I bet we only made 30 casts into it and caught what we did,” said Fillmore.

Obviously, Bethel has a long history of kicking out superlative performances at the college level, but Fillmore and Fogarty haven’t exactly covered themselves in glory on Chickamauga before.

“Both times we’ve been here, every other time we’ve fished here, we’ve never brought a limit to the scales,” said Fogarty.

Still, their 95th place finish in last fall’s Southeastern Conference event on Chick seems to be paying off this spring.

“The spot we’re catching them on, we weighed-in one last fall, a 4-pounder,” said Fillmore. “I think it’s the same grass.”