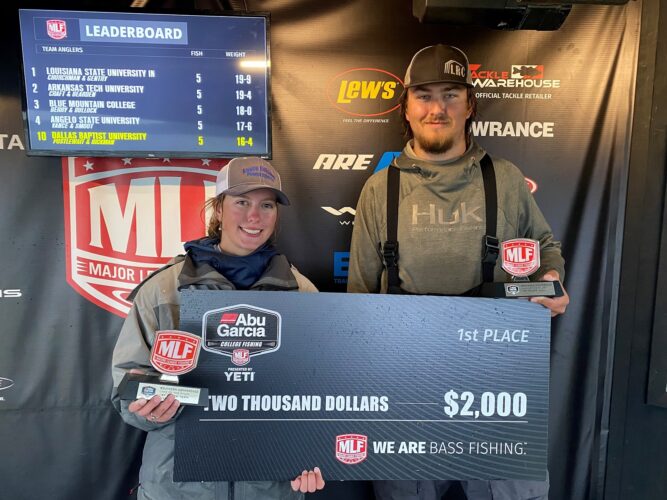 JEFFERSON, Texas – The Louisiana State University-Shreveport duo of Marlee Churchman of Shreveport, Louisiana, and Ty Gentry of Lockesburg, Arkansas, won the MLF Abu Garcia College Fishing Presented by YETI event on Lake of the Pines Friday with a five-bass limit weighing 19 pounds, 9 ounces. The victory earned the Pilots’ bass club $3,000 and a slot in the 2023 MLF College Fishing National Championship.

“We had an early boat number, and we had a deep point on the lake we wanted to try to hit before everybody else did,” Churchman said. “We pulled up and stayed there for 30 minutes and realized it wasn’t working. We had a couple of shallow spots up north we knew we could get bit on, so we rolled up there, and in the first 30 minutes we had two fish for nine pounds.”

The team decided to fish that same 100-yard stretch of water the rest of the day, fishing in water so shallow they had to pull the trolling motor up to avoid hitting bottom. They used an Owner Flashy Swimmer tipped with a swimbait, and targeted shad hitting the surface in a shell-bed ditch with grass to catch their bass. However, storms moved in around 1 p.m., and the team had to make a run back south to avoid bad weather.

“We went back to the point we started on, but we only caught a couple of short fish there,” Churchman said. “We caught 15 to 20 fish all day, and probably 10 keepers, but the big fish came early. The keepers we caught later in the day didn’t help us out.”

“I’m not going to lie; this win feels good,” Gentry said. “I won several events in high school, and I’ve fished Lake of the Pines a lot because it’s pretty close to my house. It has served me humble pie many, many times, and it just feels really good to finally win there.”

“I’m still speechless,” Churchman went on to say. “We had a decent practice, but if you told us we were going to have 19 pounds, I would not have believed you. I knew we had a good bag, but I didn’t think we had the winning bag.”

The Abu Garcia College Fishing Presented by YETI event on Lake of the Pines was hosted by East Texas Baptist University. It was the third and final regular-season tournaments for Southern Conference anglers.

MLF College Fishing teams compete in three regular-season tournaments in one of five conferences – Central, Northern, Southern, Southeastern and Western. The top 10 teams from each division’s three regular-season tournaments and the top 20 teams from the annual Abu Garcia College Fishing Open will advance to the following season’s National Championship. The 2023 MLF Abu Garcia College Fishing Presented by YETI National Championship Presented by Lowrance will be held on Lake Toho in Kissimmee, Florida, Feb. 21-23, and is hosted by the Kissimmee Sports Commission.