Sands and DiMauro of Bryan Ahead After Day 1 at Chickamauga 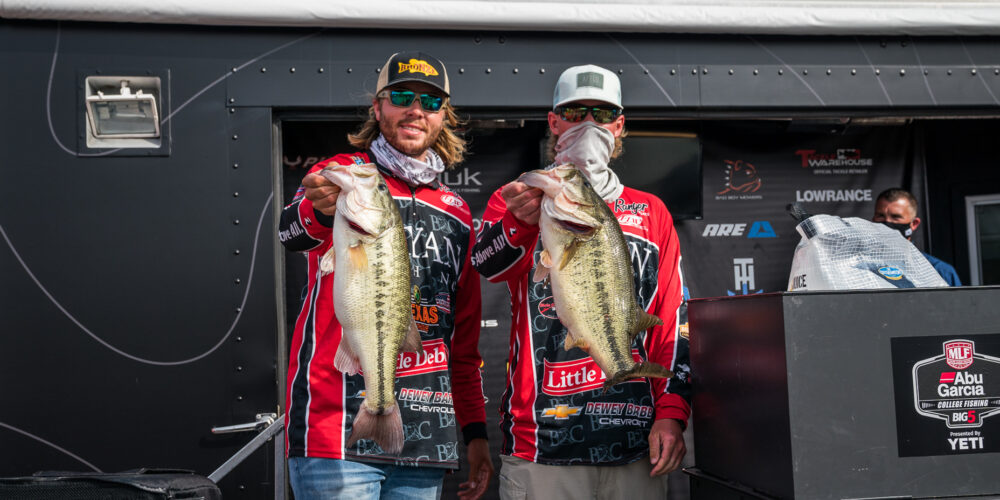 The hometown favorites, DiMauro and Sands are used to catching them and like the position they’re in going into the final day Wednesday.

“It feels really good,” DiMauro says. “A lot of people say they don’t like to be in the lead, but I’ll take it.”

For Sands and DiMauro, the goal is twofold – if they win, they’ll earn a new Phoenix bass boat. As long as they stay in the top 22, they’ll lock in qualification for their last National Championship appearance.

“The weights seem to be pretty down, so we just need to go out and catch a limit tomorrow and I think we should qualify,” says DiMauro. “That’s our first goal, this will be our last National Championship, so we want to get qualified first and foremost.”

Being one of the 22 anglers to qualify is especially important to Sands. His family lives in Calhoun, Tennessee, and provides tremendous support. He wants to end his college career on a bang, particularly for those closest to him. Qualifying is in his target zone.

“That would be incredible. I’m actually in my sixth year, I’m getting my masters, so you know I’ve got very few college tournaments left,” Sands notes.

Catching more than 20 bass on the day, the duo kept a handful of moving baits in hand. Sands and DiMauro say they caught their fish on swimbaits, lipless crankbaits and ChatterBaits. But the main “go-to” for these partners was a Yo-Zuri Rattl’n Vibe.

Neither angler is worried about the nasty weather forecast for Wednesday. DiMauro says it all comes down to finding the right group of fish.

“The conditions have been changing all week,” says DiMauro. “We’ve had to follow the fish all week up to this point. There’s a good chance we’ll have to follow them tomorrow and figure out where they’ve repositioned.”

Sands added the fishing was a bit tough, but consistent on the upper and lower ends of the lake. He also pointed out Wednesday’s rain may bring a ray of hope for some of the anglers, saying overall “the fish will bite better tomorrow.”

Make no mistake, Sands knows their deep knowledge of the lake is a distinct advantage.

“Beyond a shadow of a doubt. There’s a lot of teams fishing really good stuff, but they didn’t know how to set up on it right or they would leave too quick,” Sands notes. “Just having that knowledge, all this experience here, it really came into play today. I knew when to go and when to stay.”

Meanwhile, a young man from King University made a huge splash with a kicker he’ll remember for a long time. Fishing with partner Andrew Rogers, Gavin Cloutier caught only one fish, but he hauled in a 10-13. Cloutier says he had a bad day of practice Monday, but made a long cast in the middle of a pocket with a Strike King Red Eye Shad Tungsten 2 Tap on Day 1 and it was on.

“We fought it for probably five to six minutes,” says Cloutier. “At first, I thought it was a drum because it wasn’t moving at all. Once I got it up near the boat and it flashed, I realized what it was and luckily I had a good reel that had a good drag on it. It was a Daiwa Tatula and if it wasn’t for that, it probably would have popped off. I know she bent two of my hooks on my bait.”