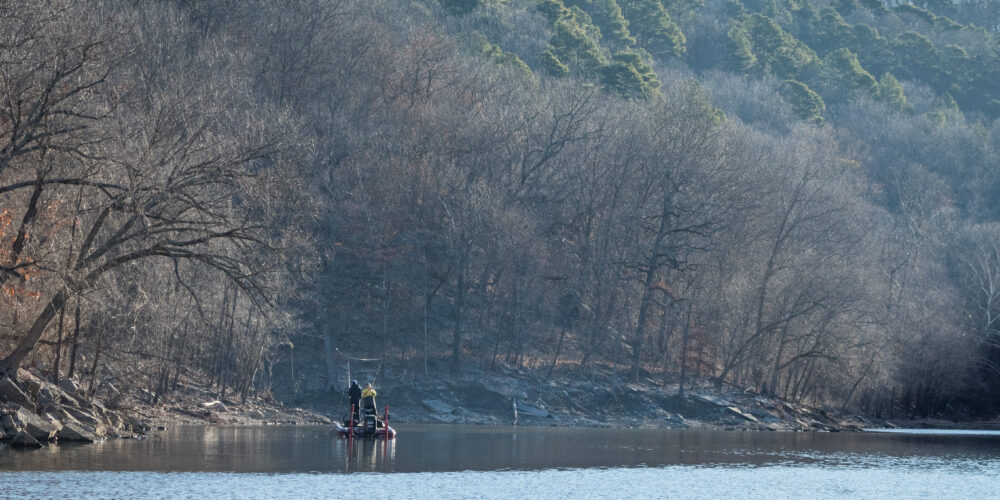 Day one of the Abu Garcia College Fishing presented by YETI National Championship on Grand Lake was about as tough as predicted. Out of 144 teams that took to the water, only 206 keepers came back to weigh-in, and only 19 teams brought in a limit. Given that, the leaderboard is still wide open, as no team managed to break 15 pounds.

In the lead, the Drury University team of Cole Breeden and Cameron Smith sacked up 13 pounds, 14 ounces to edge ahead. Behind them, basically any team that caught more than three bass or so is in the running, as the high-end potential of Grand Lake could show at any moment.

This event is presented by Lowrance and hosted by the City of Grove and the Grove Convention and Tourism Bureau.

A leading candidate from a storyline standpoint, Josh Kelly fished solo and cruised into contention with an easy limit on day one.

“I caught ‘em on a jerkbait and an Alabama rig in 4 to 10 feet of water out of brush piles,” says Kelly. “Sight-fishing them on Panoptix [LiveScope] is the deal for me.

“I kinda left ‘em alone after I caught what I had,” adds Kelly. “I had about seven keepers and five shorts, and then I just let it be and went looking. It’s just random scattered brush, I was fishing probably 10 brush piles in an area.”

The story gets to maximum college when you consider the rest of the circumstances. Not only is Kelly fishing an area he found three months ago on Google Earth, he’s getting there in style.

Tallying up the third bag over 13 pounds, Beau Browning and Grant Harris of Drury University put it together very late in the day.

“We ran way down the lake this morning, practice was horrible, but we went almost to the dam where we got a few bites in practice,” says Browning, who is a freshman marketing major. “Man, it was blank for the whole entire morning. About the time we started to lose hope, we made the run up the lake, not too far from the boat ramp. We wanted to finish the day off where we could fish to pretty much the last second.”

Harris and Browning made every second count, catching eight keepers in the afternoon and capping the day off with their big fish.

“I think with what we saw today, it finally clicked a bit,” says Browning, who is the son of Bass Pro Tour angler Stephen Browning. “I think we can build on it and make a good pattern out of it.”

The final bag over 13 pounds on the day, the McKendree duo of Tyler Christy and Trey Schroeder did their work in the morning.

“We had a limit pretty quick, probably by 11, and culled out twice by 12, which I wasn’t really expecting being we had such a tough practice,” says Christy, a junior majoring in economics finance. “After we got our limit and culled, we decided to leave our area and look around for some new stuff.”

The duo think they’re on a bit of a pattern, but so far they’ve only needed to fish a couple of areas to catch fish.

“As long as the fish keep coming, we shouldn’t have a problem,” says Schroeder, who is a junior majoring in environmental business. “I was here before the cutoff, to pre-fish, before the ice, and I found a few areas that had a lot of bait and fish in them. We’re kinda just fishing those areas real slow and trying to buy a bite. It’s been tough, we’re really trying to capitalize on every bite we get. We didn’t lose any fish today, and I think that’s part of the reason we had a decent bag.”

Perhaps fishing a bit more off the wall than the average team, Zachary Martin and Harbor Lovin of Murray State put together some decent numbers on Day 1 to slot into fifth place.

“It was a honestly a struggle,” says Lovin who is a senior engineering graphics and design major. “I caught our first one on a crappie jig, so that was how our day started. We found a couple little groups of fish with LiveScope, and if you caught one and started looking you could pretty quickly tell if there were more there or not.  We had a couple little flurries that helped.”

“He’s downplaying the flurries,” says Martin, who is a senior majoring in electromechanical engineering technology. “I think there was one point where I was at the livewell culling for 30 minutes and he kept flipping them in the boat.”