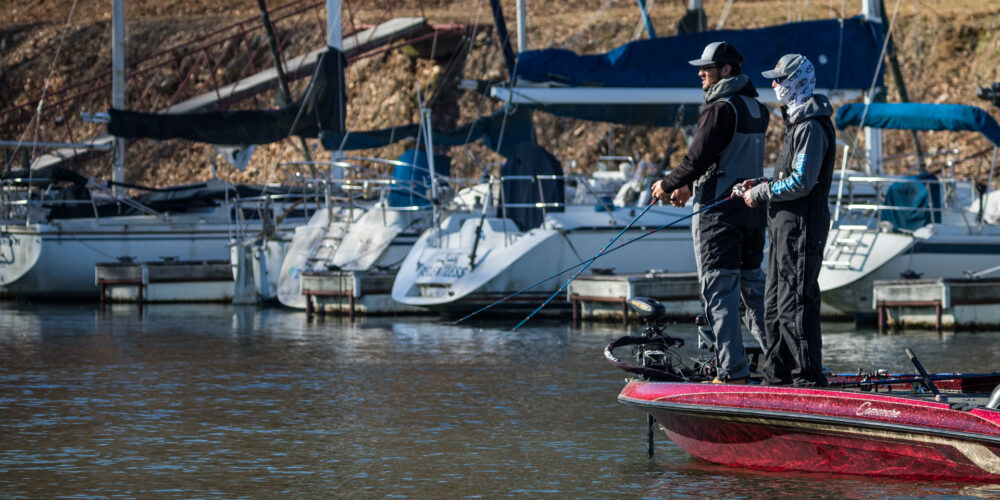 Day 2 of the Abu Garcia College Fishing presented by YETI National Championship on Grand Lake was a lot like the first. The leaders continued to do decently for the most part and a huge chunk of the field struggled to buy a bite.

So far, the lower end of Grand has been strikingly better than the mid-section or upper end, but not for any discernable reason. There’s a variety of water conditions to be found throughout the lake, and though there is plenty of fairly clear water down the lake, a lot of it is in the 30s and low 40s, which isn’t notably warmer than anywhere else.

Going into the final day, we’re still waiting to see a really big Grand Lake bag. Leaders Zachary Potter and Alex Johnson showed the potential today, with a 17-pound, 14-ounce catch, and there are signs the fishing could be heating up. On day two, far more individual large fish made it to weigh-in, though the fishing was still extremely slow overall.

Running way down the lake, Zachary Martin and Harbor Lovin of Murray State are right in the hunt for a second National Championship for the Racers. After putting 14-8 on the board on Day 2, the pair moved up to second place.

Fishing mostly in one creek, the pair have caught their weight on a jerkbait and a crappie jig, with their two biggest coming on a crappie jig on day two.

“We never had a big flurry like we did yesterday, it was more picking one up here and there,” says Martin. “We’d catch one on a little crappie jig and then catch one on a jerkbait. We made a rotation all day, we tried to leave some room to fish tomorrow, but we didn’t leave them biting really.”

“I think the area is really, really populated,” says Lovin. “When we’re seeing them, we’re seeing them in groups of four or five. It seems like if you catch one, half the time you catch them all, or they leave or don’t bite anymore.”

A few years ago, Blake Albertson and Adam Puckett won a title for Murray on the Potomac. Now, Lovin and Martin have a chance to once again show off the talent that Murray State attracts.

“It feels great,” Martin says of their spot in the standings. “This is my second National Championship and the first time being in contention for one. Blake and Adam won a few years ago, and hearing stories from them, it’s a great experience. You guys host a great event, so I’m very excited to get out there tomorrow.”

“It’s always fun to be in contention, it doesn’t matter if it’s a $20 dollar jackpot or the biggest thing you’ve ever fished,” says Lovin. “But, this is what we do it for, this is why we break down and fix things, spend money and stay up late, leave our friends and family – this is what you do it for.”

Falling off the lead, Cole Breeden and Cameron Smith still tallied 13-2 on the day and are well within striking range.

Fishing brush with LiveScope and jerkbaits, the Drury duo had a slower go of it on Day 2. On Day 1 the pair had a limit early, but today it took them until close to noon.

“We kinda just sit on spot and try to make them bite,” says Breeden. “We have five or six spots, and we only ran three yesterday, and we ran all but one today. There are a lot of fish you can see following our baits, and they look like the bigger ones. It’s calm and sunny, so it’s hard to get them to bite. Hopefully tomorrow it’ll go a little better.”

With some cloudier and perhaps rainy conditions in the forecast for the final day, Breeden and Smith could be well positioned if they can trigger their bigger fish.

Falling off the pace a bit, Josh Kelly put 12-4 on the scale on Day 2 and dropped to fourth.

Kelly is fishing down the lake like everyone else, but he’s running there in a Tracker with a 60-horsepower outboard. To say the top prize of a Phoenix 518 Pro would be an upgrade is probably an understatement.

Like many, he’s fishing a jerkbait around brush piles with LiveScope, though he did break the mold a bit and catch a few on an umbrella rig.

“I feel pretty good,” says Kelly of his prospects on the final day. “I’ve got another team in there with me, and they’ve been real cool about it. Either way, they’re reloading in there, so I feel pretty good. They started biting better in the afternoon, and I had about 10 fish marked before I had to leave.”

One of the more dangerous teams in the top 10, Beau Browning and Grant Harris stubbed their toes a bit on day two. Still, the pair seem to have a better line on a truly big bag than most of the others in the top 10.

“I really thought today was going to be the day that we hammered on ‘em – I mean, dropped a big bag and got in front of the pack,” says Browning. “Honestly, it was pretty disappointing this morning. We pulled up, caught two solid keepers on our spot and then it went dead on us.”

Browning and Harris are essentially fishing one spot and one area down the lake. Today, the pair caught two fish early, and then filled their limit and culled midday.

“We’re throwing an A-rig and a jerkbait,” says Browning. “It’s very simple fishing. Yesterday we picked the A-rig up and caught a limit quick. You know throwing an Alabama rig what likes to eat it, big ones like to eat it.”

Going into the final day, Browning and Harris are at the very least talking a good game.

“I feel really good about tomorrow because I know what is there from yesterday,” says Browning. “If they fire it could be lights out.”