‘The Cajun Baby’ Cliff Crochet Adds Another C to His Name: Conservation 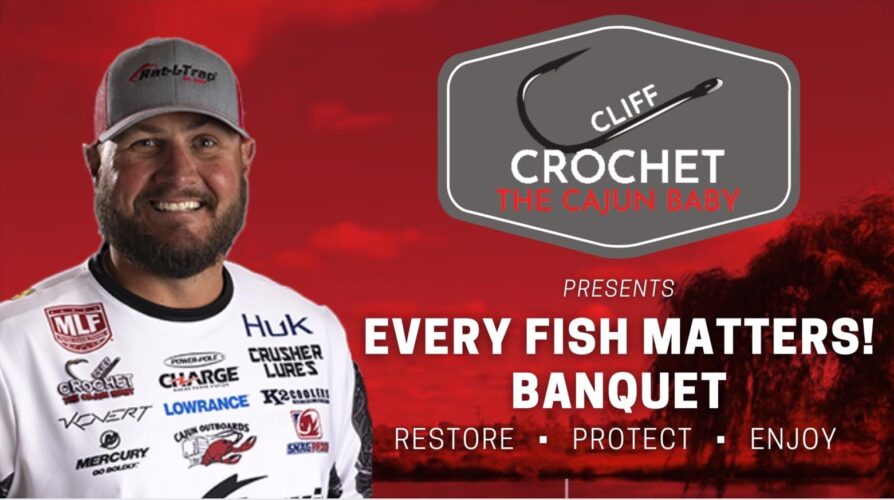 PIERRE PART, La. – While many anglers were enjoying the late-July, post-ICAST lull before events started back up, Bass Pro Tour angler Cliff Crochet of Pierre Part, Louisiana, was hard at work. On July 28, at the St. Joseph the Worker Church Hall in Pierre Part, Crochet held the inaugural Every Fish Matters! fundraiser banquet. Crochet’s goal was simple – to raise funds to purchase F1 Largemouth Bass fingerlings to stock in 2023 into the Atchafalaya Basin and Lake Verret. What Crochet did not expect, however, is that his event would turn out to be one of the largest fundraisers in the history of professional fishing.

Prior to 2022, Crochet had been toying with the idea of how to give back to his hometown and the fisheries that launched his career. At REDCREST 2022 earlier this year, he watched Kevin VanDam’s foundation donate $5,000 to the Oklahoma Department of Wildlife Conservation as seed money for a F1 restocking program for Oklahoma’s Grand Lake O’ the Cherokees. The Every Fish Matters! banquet was born that day, as Crochet knew he could do the same, or more, for Lake Verret and the Atchafalaya Basin.

Crochet’s first step was to meet with the MLF Fisheries Management Division (FMD) and fisheries biologist Steven Bardin to get help with the process of how to get approval to stock fish. This process is unique within every state, but the state of Louisiana was grateful and more than willing to accommodate Crochet’s request, as well as offer up other opportunities for future projects. Once approved for the stocking, Crochet asked the Major League Fishing Angler’s Association for help in setting up the event. Crochet then went to work on his own, engaging his sponsors and friends and calling on his vast fishing network to do what they could do to help him raise funds.

At the close of the night the banquet had raised an astounding total – more than $84,000 to purchase the F1 Fingerlings.

“I want everyone to know that by supporting, donating, and attending that they made this event successful,” Crochet said. “It shows how much our community cares about our fisheries and the area we live in, and I am honored and humbled to have been a part of this event”.

Since the banquet, several matching funds opportunities have emerged that will contribute to the 2023 fish stocking, and to set up an emergency relief fund to restock the Atchafalaya Basin in the case of a hurricane or other natural disaster in the future. The 2023 stocking program will begin in March and occur throughout the Atchafalaya Basin during multiple events.

Each event will have an opportunity for youth and anglers alike to release the fish and see the fingerlings going into their local water bodies. The Louisiana Department of Wildlife and Fisheries and the MLF FMD will be work closely together to complete these stocking events, as well as provide opportunities for anglers to engage in other conservation initiatives throughout the basin. Crochet plans to make the Every Fish Matters! banquet an annual event to keep the program funded for generations to come.