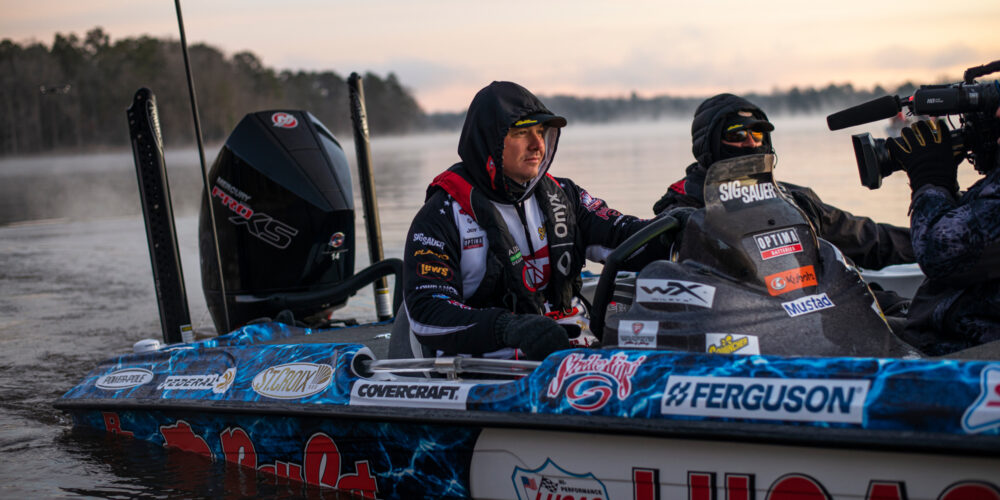 Nine remaining anglers hit the water for the 2021 Summit Cup Sudden Death Round 2, but only four will move on. Photo by Garrick Dixon
June 10, 2021 • Mason Prince • Cup Events

COLUMBIA, S.C. – The second and final Sudden Death Round of the 2021 Wiley X Summit Cup Presented by B&W Trailer Hitches is set to air this Saturday at 2 p.m. ET on Outdoor Channel. Nine anglers will put their boats in the water on the Little Saluda River area of Lake Murray but only the first four to hit the 12-pound target weight will be moving on to the Championship Round. The nine anglers competing in Sudden Death Round 2 are:

These nine pros will fish with the goal of catching enough scorable bass to hit the 12-pound target weight. The first four anglers that do so will be advancing to the Championship Round to meet the four advancing anglers from Sudden Death Round 1. A scorable bass must weigh at least 1 pound.

There are three pros in the Sudden Death Round 2 field that have an MLF Cup trophy with their name on it. Bobby Lane (2016 Challenge Cup and 2017 General Tire World Championship), Jeff Sprague (2020 Challenge Cup) and Kevin VanDam (2014 and 2016 Summit Cup and 2018 Challenge Cup). VanDam just won his first Bass Pro Tour event on Lake Chickamauga on Wednesday, giving him four MLF wins in his career.

In Sudden Death Round 1, Bradley Roy was the first angler to hit the 12-pound Target Weight, catching four bass for 13 pounds, 10 ounces. Shin Fukae, Jacob Powroznik and Marty Robinson were the other three anglers who were able to reach 13 pounds on SCORETRACKER® the quickest. Those four pros will head to the Championship Round while Dustin Connell, Jordan Lee, Andy Morgan, Tim Horton and Tommy Biffle will have to pack up their rods and head home after being eliminated.

Sudden Death Round 2 will air on Outdoor Channel on Saturday, June 12 at 2 p.m. ET. The full television schedule can be found at MajorLeagueFishing.com.