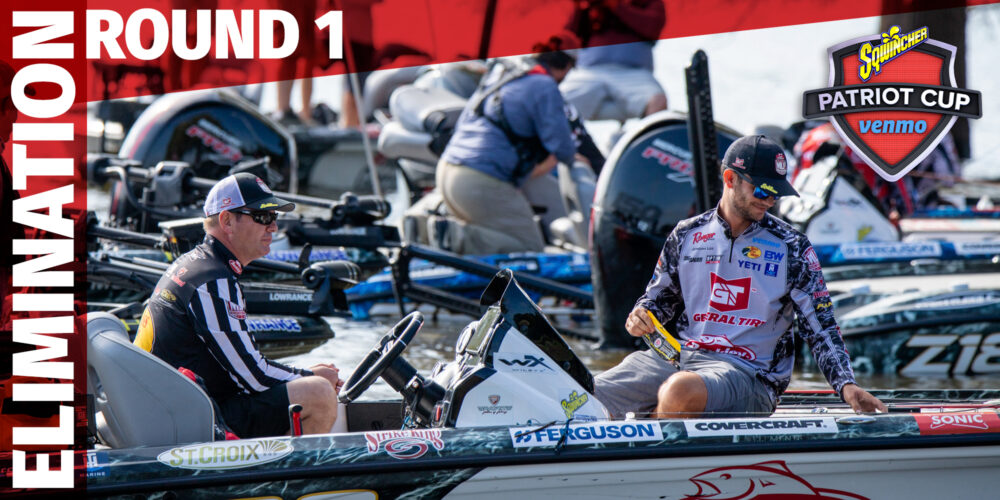 The first 10 of 30 MLF pros hit the water in Muskogee, Oklahoma for the Patriot Cup Elimination Round 1. Photo by Joe Branch
April 2, 2020 • Mason Prince • Cup Events

MUSKOGEE, Okla. – Thirty anglers showed up to eastern Oklahoma in September 2019 ready to compete in the 2020 Sqwincher Patriot Cup Presented by Venmo.

The 10 pros showed up at Fort Gibson Lake not knowing where they were until they pulled up to the boat ramp. When they arrived, they saw a lake that was much higher than normal, especially in late summer.

“This lake is anything but normal right now,” MLF analyst Marty Stone said. “This lake has been hammered with high winds and lots of rain over the past couple of months. The water was over 30 feet high at one point. However, for the first time in months, the water is starting to recede. We’re sitting at just over 6 feet above full pool.”

Fort Gibson Lake covers 104 miles of shoreline and over 5,700 surface acres. The 10 anglers will be fishing the north end of the lake near the Neosho River. With water levels falling, Stone believes that will improve the fishing and help the pros find some bites.

“There are areas on this lake where the fish have been inaccessible for months up until now because of the high water,” Stone explained. “The anglers will find flooded buck brush, willows, pole timber, and bank grass. This lake also has miles and miles of rock and chunk-rock bank. The cover is unlimited for these guys.”

The key, Stone says, is for the anglers to find that perfect mixture of cover and baitfish. The pros that do so the quickest will be on their way to Sudden Death.

How They Got Here

The 30 anglers competing in the Patriot Cup qualified by way of Stages Five and Six of the 2019 Bass Pro Tour. They were the Top 30 point-earners through those two events.

Jordan Lee is the only Bass Pro Tour event winner in Elimination Round 1 with his Stage One Championship in Kissimmee, Florida. The Alabama pro will be looking for the third MLF win of his career.

Greg Vinson is fresh off of qualifying for the 2021 General Tire World Championship thanks to his third-place finish in the Heritage Cup. Vinson had a strong showing in his first-ever MLF Cup event. We will see how “The Rooster” handles his second shot at an MLF Cup trophy.

Todd Faircloth and Dustin Connell both would like to build off of what they did in the Heritage Cup. Connell made the Championship Round while Faircloth made it to Sudden Death before heading home.

The 10 competing anglers bring us Elimination Round 1 on Saturday, April 4 at 2 p.m. ET on Outdoor Channel.