VIEWER’S GUIDE: Sunny Skies for Smallmouth Fishing in Elimination Round 3 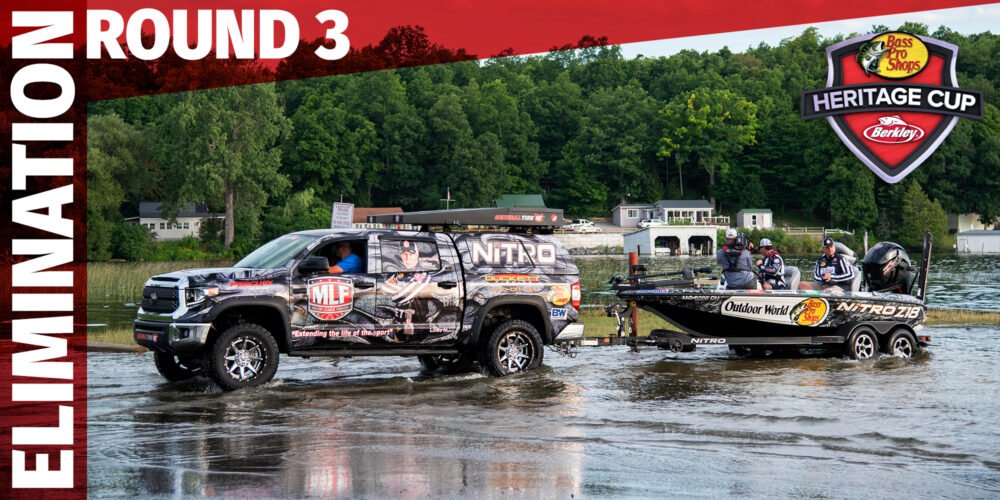 SYRACUSE, N.Y. – So far, 12 anglers have advanced to the Sudden Death Rounds of the Bass Pro Shops Heritage Cup Presented by Berkley. Saturday, 10 more anglers will compete in Elimination Round 3 to be one of the six pros to punch their ticket to Sudden Death.

Tommy Biffle, Stephen Browning, Luke Clausen, Todd Faircloth, Dave Lefebre, Aaron Martens, Jacob Powroznik, Fletcher Shryock, Jeff Sprague, and Greg Vinson will all take on Henderson Bay with no knowledge beforehand of where they will be fishing until they arrive at the boat ramp.

It was another bright and sunny day on Lake Ontario when Elimination Round 3 was filmed in late July 2019. While there are both smallmouth and largemouth all over the Henderson Bay area, we’ve seen over the first two Elimination Rounds that the anglers that key in on smallmouth are the ones that usually succeed.

MLF analyst Marty Stone says that the anglers that go hunting for smallmouth will focus on a combination of rock formations mixed in with aquatic grass such as milfoil, coontail and sandgrass.

For those anglers that want to test their luck searching for largemouth, they will be greeted by high water levels and flooded banks on the back reaches of the Black River. There’s plenty of cover along the banks like boat docks and willow trees, but so far we haven’t seen any anglers advance to Sudden Death who have solely relied on the largemouth bite.

This could arguably be perceived as the most stacked field in all three of our Elimination Rounds. While all of these anglers had strong showings in Stages Three and Four of the 2019 Bass Pro Tour, this group of 10 contains two Stage champions and the most recent MLF Cup champion.

We start with Jeff Sprague. The Texas pro wrapped up a 2020 Challenge Cup championship in Mountain Home, Arkansas prior to the filming of the Heritage Cup. Sprague had a strong showing on the 2019 Bass Pro Tour as well, finishing second in the Race for the Points Championship behind Edwin Evers.

Jacob Powroznik was the 2019 Stage Three Champion in Raleigh, North Carolina, helping earn him a spot in the Heritage Cup. Fast forward 11 months, Powroznik just took home the 2020 Stage Two championship on Lake Okeechobee. Keep an eye out for Powroznik during this event.

Aaron Martens put on an offshore clinic during his 2019 Stage Six win on Table Rock Lake just two months prior to filming the Heritage Cup. Martens is no stranger to working a spinning rod searching for smallmouth. He’s another angler who you can pencil in as a favorite to win.

How and Where to Watch

The 10 competing anglers bring us Elimination Round 3 on Saturday, Feb. 29 at 2 p.m. ET on Outdoor Channel.