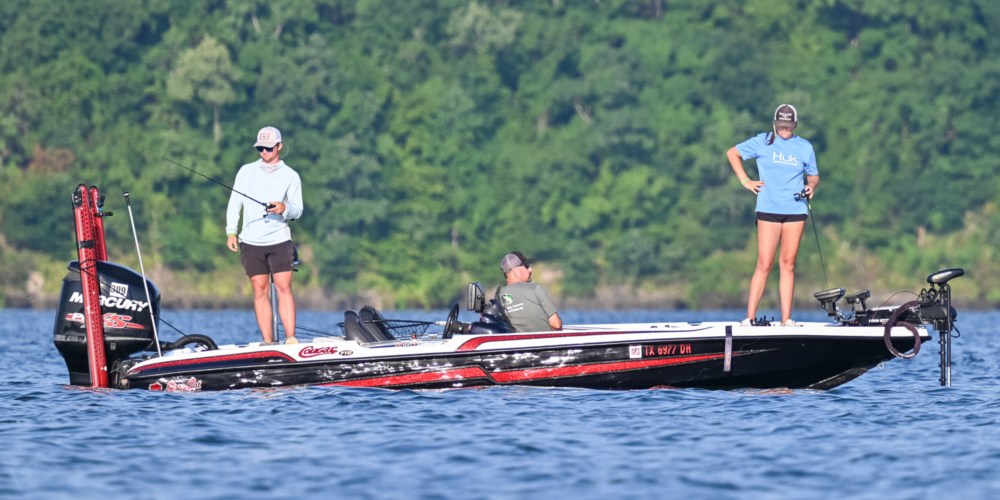 FLORENCE, Ala. – A single ounce separates first place from runner-up at the 2022 High School Bass Fishing National Championship in Florence, Alabama. On Friday, one team will be crowned national champion.

Day 1 leaders Fallon Clepper and Wyatt Ford have ridden a furious opening flurry to pole position. In the span of about 15 minutes, the co-ed team from Montgomery, Texas, boated two fish over 6 pounds and a 4-pounder to complete an 18-pound, 8-ounce first day. On Thursday, the bite seemed to slow down for the team; however, 8-3 was enough to just barely edge a solid 26-10 two-day total from New Hampshire’s Keene Blackbirds, led by Bradyn Antosiewicz and Connor Holbrook.

Spotted at weigh-in, Clepper nodded emphatically when asked if they had left more fish for the final day.

“That one ounce lead doesn’t really matter,” said team captain Julian Clepper. “Tomorrow is a new day. We are going to go out there and swing for it. Our goal is to get three in the boat and other than that we aren’t going to set the standards way up high or way down low. If it’s meant to be, it is meant to be.”

The elder Clepper, Fallon’s father, also noted that the team left plenty of fish in the area that has so far produced a solid tournament for the Texas anglers. Current, he said, would help his squad, although it will also help every team remaining in the field.

“The kids feel like they can catch a limit,” he said. “If they start generating more current, I think there is a chance that we can have another big weigh-in.”

To take home a national championship, Clepper and Ford will not only have to out-duel the New Hampshire duo nipping at their heels, but a returning champion as well. Sitting in 10th place about 5 pounds back from the leaders, 2021 High School Bass Fishing National Champion Jerry Brumbaugh has returned to Championship Friday with new partner, Dalton Metzger.

“It takes a lot of hard work to win,” said Brumbaugh, who secured a college scholarship after taking home the title last year at Lake Hartwell. “The last time I won, that was all of my life’s learning spent fishing and traveling across the country for high school tournaments for years. So winning is very, very hard. You have to be better than 400 other boats and you have to be on something that is your end level deal.”

Brumbaugh plans on swinging for the fences on Friday and chasing the three biggest bass in the lake. And like the rest of the Top 10, his partner is ready to take a puncher’s shot at winning it all.

“To win a second one for Jerry would be crazy,” Metzger said.

Weather conditions on Friday call for another balmy, 96-degree day with bluebird skies. The national championship, it seems, hangs on the ability of competitors to draw out big bites from their summertime slumber.