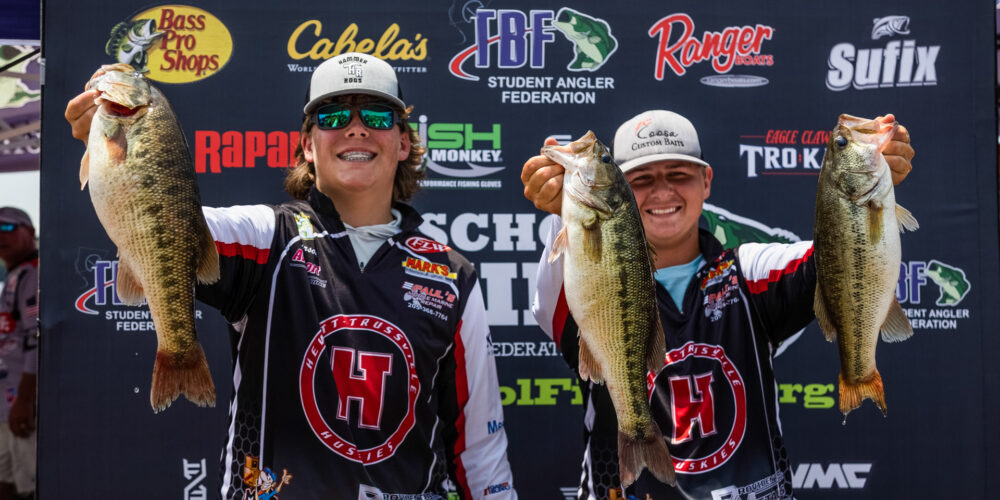 They were knocked off of the hot seat in yesterday’s National Championship finale. Today, they became world champions. That’s how a weeklong saga ends on Lake Hartwell for young Andrew Jones and Carson Underwood. With a cavalcade of scholarship offers, a pair of 6-foot trophies and a story of resilience that the high school fishing friends will never forget.

Putting three for 10 pounds, 9 ounces on the scale on Day 4 of the High School Fishing World Finals, the Hewitt-Trussville High School Huskies team of Jones and Underwood earned the win. With weights zeroed on the final day, the team edged out the Madison County Red Raiders team of Will Hart and Logan Fisher—the same duo that knocked them off of the hot seat yesterday—who weighed an even 10 pounds. For the win, the Huskies take home a number of lucrative scholarship offers from top college teams as well as the TBF, including a $128,000 offer from Drury University, a $120,000 offer from Simpson University, a $90,000 ride from Kentucky Christian University, and a $56,000 nod from Bethel University. The TBF is offering $12,000 in scholarship assistance to any college of their choosing.

“Never in a million years did I think I would have a scholarship offer to Bethel University for fishing,” said Jones, a 16-year-old rising junior. “But here we are.”

“I still don’t believe where I’m at,” added Underwood, a 15-year-old rising sophomore.

Jones and Underwood have been fishing together since middle school. Leaning on the guidance of their parents, they’ve forged a path from the outskirts of Birmingham, Alabama to one of the pinnacles of high school bass fishing. After placing fourth in the National Championship yesterday, they were rewarded for a week of perseverance when weight totals were reset to zero for the TBF World Finals. This time, the area they’ve had middling success with all week finally paid off.

“I feel like today they really bit better,” said Jones. “The other days, we didn’t have a limit until 10:00 a.m. This morning, we pulled up to the same spot that we have been starting at all week and they were biting. We got three on the board really fast. From there, I thought we had a really good chance to win.”

“It felt amazing,” said Underwood. “It feels like all of the hard work we have put into this all week really paid off.”

To boat their winning bag, the team relied on topwater tactics with the Sebile Magic Swimmer—also yesterday’s winning bait— and an Evergreen Shower Blows to lure bass up from 20-25 feet of water.

“We were burning topwater over them,” said Jones. “You had to burn it fast, and it had to be over that depth. Anything deeper and you couldn’t call them up. Anything shallower and they seemed to get spooked.”

In the end, Jones and Underwood outpaced a field of nearly 400 boats, with competition from as far away as California, Arizona, Utah and Zimbabwe; not to mention an army of competitors from South Carolina and Georgia, many of whom know the famously fickle Hartwell intimately. Now, the two high school anglers with plenty of career left will have their pick of collegiate fishing opportunities. And, they’ll be able to add their names to the list of legendary anglers who’ve taken home top honors on this historic South Carolina fishery.