Omori On Top from the Start, Montgomery & Pace Jump Into Top 6 Late in Elimination Round 1 - Major League Fishing
Shop

Omori On Top from the Start, Montgomery & Pace Jump Into Top 6 Late in Elimination Round 1 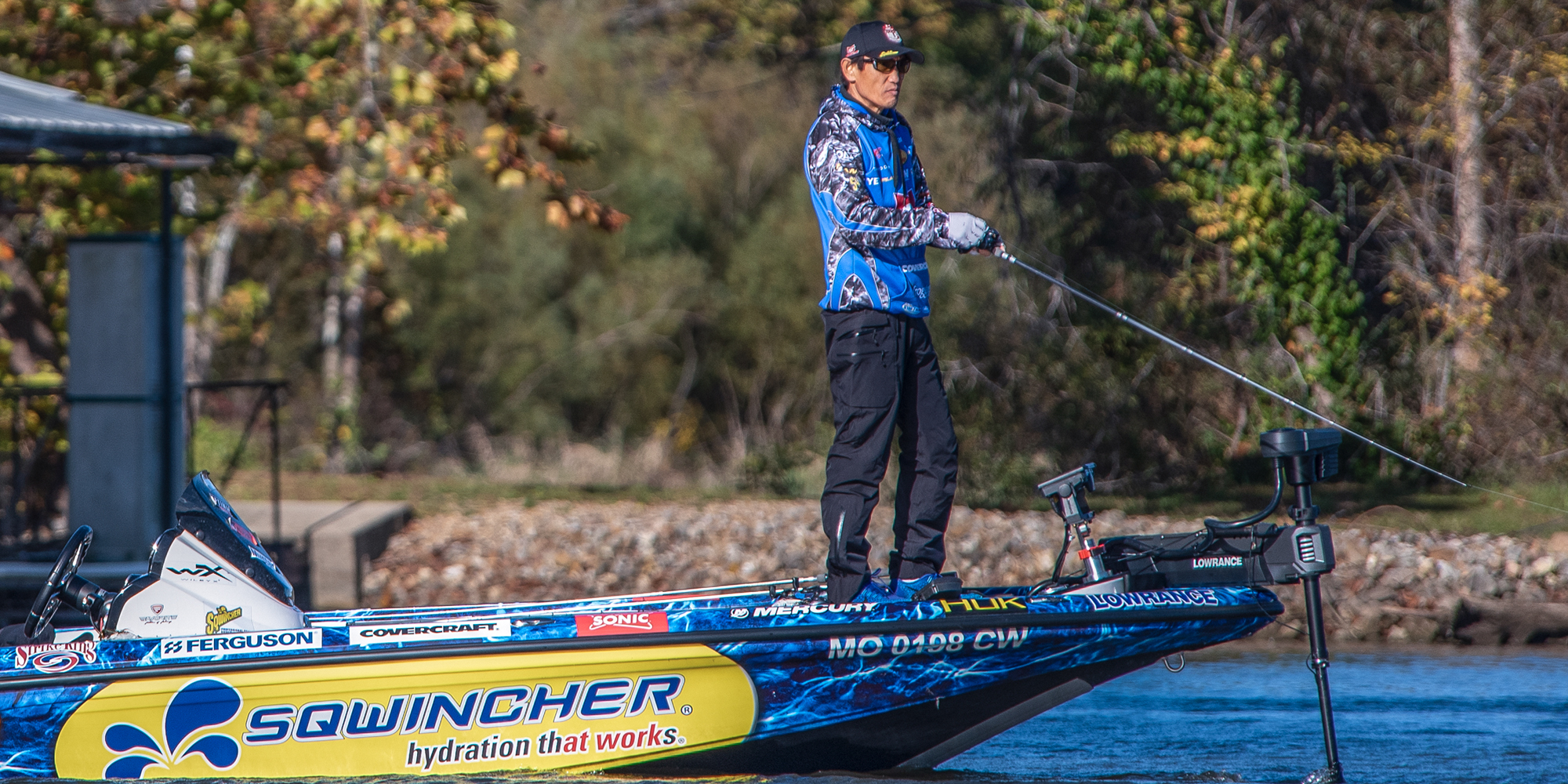 Takahiro Omori was dominant in the first Elimination Round of the 2020 Summit Cup. Photo by Garrick Dixon

OSAGE BEACH, Mo. – It took a little while for the 10 anglers competing in Elimination Round 1 of the 2020 Wiley X Summit Cup Presented by B&W Trailer Hitches to figure out the bite, but by the end of the day it was a tight race to that sixth-place spot on SCORETRACKER®.

Omori Ahead of the Field

Takahiro Omori ended the day on top of SCORETRACKER® with 18 bass for 27 pounds, 14 ounces, more than 7 pounds ahead of second-place Cody Meyer. Fishing in his third MLF Cup event of the season, Omori is no stranger to advancing to Sudden Death: The Japanese pro won his Elimination Round during the Challenge Cup and advanced to the Sudden Death Round in his Heritage Cup appearance.

While most of the field was struggling to find bites in the first two periods, Omori found success with a one-two punch of baits that are straight out of the fall fishing playbook.

“This time of the year and this kind of lake is really how I like to fish,” Omori said. “I caught a lot of fish on a squarebill crankbait and a white bladed jig. I fished the crankbait around gravel, some kind of rocky point and even some wood. I mainly worked the bladed jig around some boat docks and that’s how I was able to win.”

Omori also landed the Berkley Big Bass of the Day with a 4-8 largemouth in Period 1. He caught that bass on that shad-colored crankbait near some standing timber to end the first frame. Omori then rode that wave all the way to an Elimination Round 1 victory.

Cody Meyer, Michael Neal and Brandon Coulter will also be moving on to the Sudden Death Rounds. Those three pros spent most of their day trying to catch Omori but were unsuccessful. Although they didn’t notch the win, they were all comfortably ahead of the Elimination Line for much of the day.

That left the remaining six anglers fighting for the last two spots in the Top 6. Entering the final period, Russ Lane (fifth place) and Aaron Martens (sixth place) held the last two qualification spots. However, Anthony Gagliardi and Andy Montgomery were both less than a pound behind Martens for the final spot.

Even further down SCORETRACKER®, in last place, was 2019 Bass Pro Tour Stage Eight champion Cliff Pace. He had only two bass for 2-13 through two periods and was not looking like he would be playing a factor in the race for the Top 6.

Using a two-bait combo of a spinnerbait and a jerkbait, Pace was able to find a productive area where he landed six bass for 9-15 in the final period, including a 3-9 with only 15 minutes remaining. His final fish, a 1-9, secured his spot in the Top 6 and a spot in the Sudden Death Rounds.

“I made the day a lot harder on myself than I should have,” Pace explained. “I’m really thankful that I was able to scrap enough fish together to survive. We live to fight another day and maybe next time it will be a little bit easier on me.”

With only one more spot up for grabs, the pressure began to mount for Martens, Anthony Gagliardi and Andy Montgomery. Martens was able to grab two fish for 2-7 in the final period, but it was not enough to hold off Montgomery.

The South Carolina pro found four scorable bass weighing in at 5-13 to push him ahead of Martens for the last position. Montgomery’s last two fish in the final eight minutes of competition ended up being the difference, as he edged Martens by 2-8.

“What a day,” Montgomery exasperatedly said on the deck of his boat after Period 3. “I didn’t think we were going to make it, but somehow we made it. Live to fight another day.”

Elimination Round 2 of the Wiley X Summit Cup Presented by B&W Trailer Hitches begins on Saturday, May 23 at 2 p.m. ET on Outdoor Channel.

Ten new anglers face off to be one of the pros in the Top 6 when the day is done. Those six will move on to the Sudden Death Rounds with the six pros advancing from Elimination Round 1.