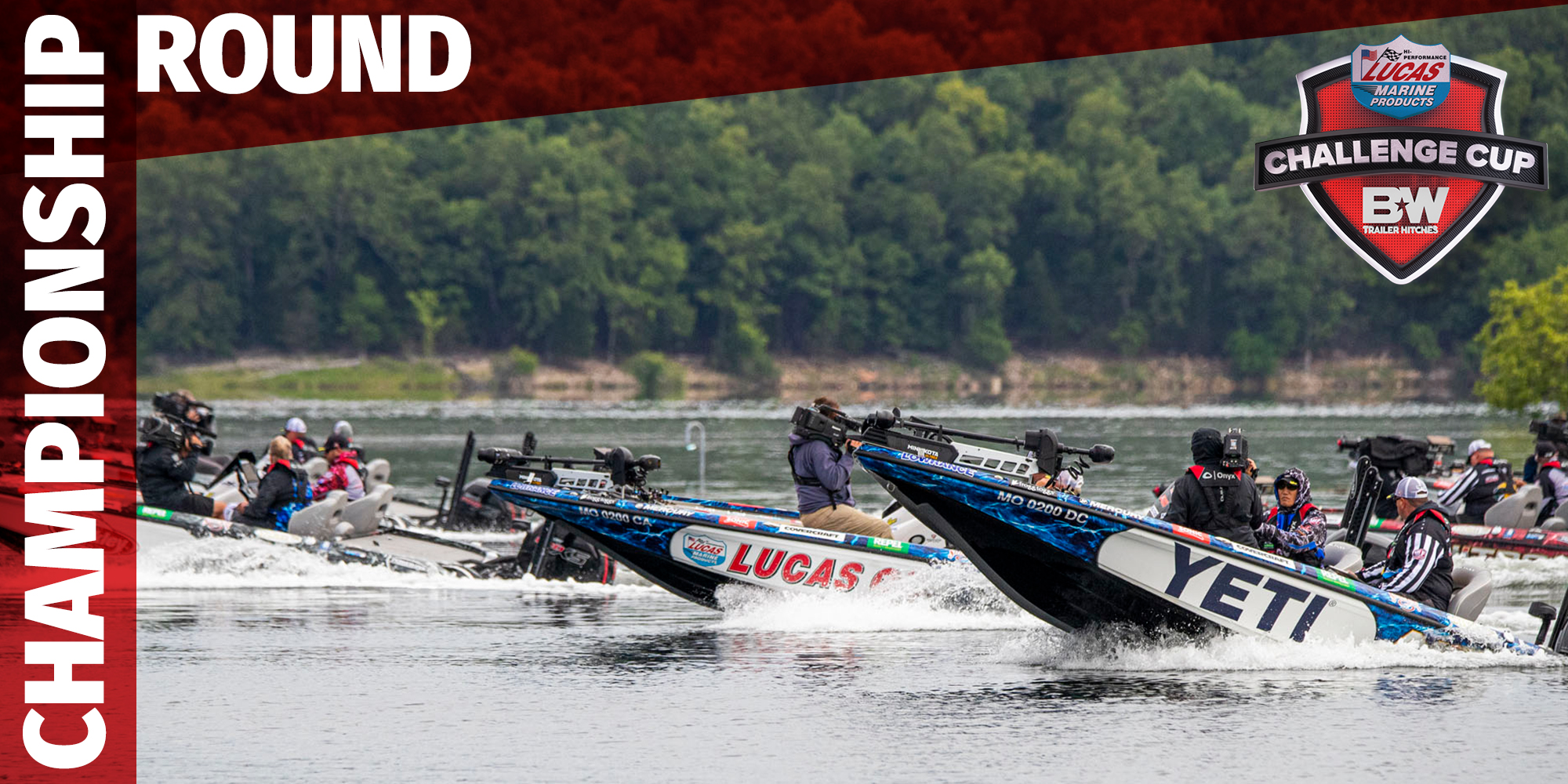 Eight MLF pros head out onto Bull Shoals Lake, but only one will return the 2020 Challenge Cup Champion.

MOUNTAIN HOME, Ark. – After three Elimination Rounds and two Sudden Death Rounds, it all comes down to this. Eight anglers will compete in the Championship Round, but only one will walk away with the 2020 Lucas Oil Challenge Cup Presented by B&W Trailer Hitches trophy.

The eight pros will return to Bull Shoals Lake in Mountain Home, Arkansas but will only have an area of about 7,800 acres to fish. Like the previous five rounds, flooded conditions remain the key story. The pros will have to deal with water levels 25 feet higher than normal when they pull up to the ramp. Flooded brush, trees, grass and sawdust piles will be the main cover the anglers will focus on. Offshore points and bluff walls will be the key pieces of structure.

Brett Hite, Mike Iaconelli, Matt Lee, Andy Montgomery, Michael Neal, Takahiro Omori, Jeff Sprague and Randall Tharp are the eight anglers vying for the 2020 Challenge Cup championship. Iaconelli is the only angler in the field with an MLF win on his record. Ike is trying to join Kevin VanDam to become the second angler with three MLF wins to his credit.

Takahiro Omori has been fishing MLF Cup events since the first competition on Lake Amistad in 2011. The Japanese pro is hoping to hoist his first MLF trophy, but he’ll have to outlast some of the toughest competition in bass fishing. He has momentum on his side, after winning both his Elimination and Sudden Death Rounds heading into this Championship Round.

Another pro with experience and momentum like Omori is Andy Montgomery. The South Carolina pro is also looking for his first career MLF win after hitting the 25-pound SIG SAUER Target Weight first in Sudden Death Round 1. Montgomery has been close time and time again, could his first MLF victory come in the Natural State?

Beginner’s Luck or Just That Good?

Hite, Sprague and Tharp have managed quite the collective showing in their first-ever Cup event. All three got their first experience with the MLF format in 2019 and have impressed in their MLF Cup debut. Hite dominated his Elimination Round by catching more than 50 pounds of scorable bass. Hite’s quality bites with his vibrating jig will make him one of the key anglers to watch in the Championship Round.

Sprague came into the 2020 Challenge Cup as the second-ranked angler in the field after a fantastic start in his first two Stages on the 2019 Bass Pro Tour. While the Texas pro was consistently competitive all season long on the Bass Pro Tour, he was unable to come away with a win. He enters the Championship Round with yet another chance at a trophy, and this time he hopes to deliver.

Tharp has voiced, time and time again, his affinity for big bites. The Florida pro has been one of the few anglers during Challenge Cup competition that has found larger-than-average fish day in and day out. Watch for Tharp to continue to keep a big jig tied on as he tries to use big bites to get him to the top of SCORETRACKER®.

What’s at Stake Besides a Trophy

While the ultimate goal for the pros is hoisting the trophy at the end of the day, there is another prize up for grabs: a bid to fish in the 2020 General Tire World Championship. The top three pros in the Championship Round automatically qualify for the World Championship, something that MLF analyst Marty Stone thinks these anglers do not take lightly.

“Qualifying for the General Tire World Championship is one of the hardest things to do in bass fishing,” Stone explained. “Not only do these guys have to compete against the best in the world just to qualify for an MLF Cup event, but they also have to battle 29 other hammers once they get to the Cup. To be top three in this group of anglers is quite the feat.”

Edwin Evers (REDCREST Champion) and Jacob Wheeler (defending World Champion) have already secured their spots in the World Championship. Stone says that if these anglers have the opportunity to try and join Evers and Wheeler, they will not hesitate at the chance.

“If a guy knows he’s out of contention for the top spot, that doesn’t mean he’s going to just give up on his day,” Stone said. “Those two remaining spots are so valuable and these guys know that. Look for this one to come down to the wire between about four or five pros trying to claim their spot.”

The eight competing anglers bring us the Championship Round on Saturday, Feb. 8 at 2 p.m. ET on Outdoor Channel.

Ask the Anglers Presented by Champion: How Do You Avoid Dock Talk?