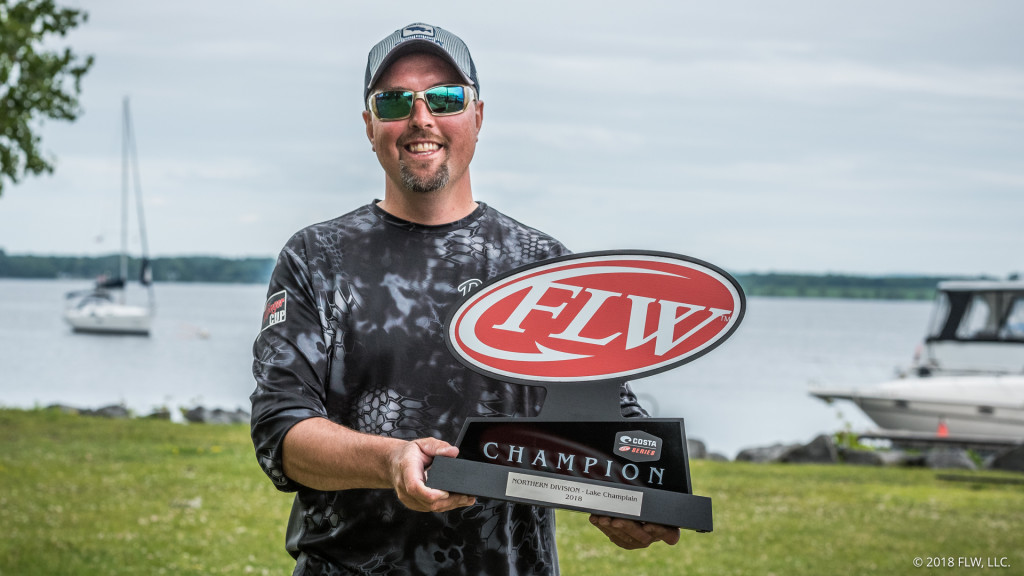 PLATTSBURGH, N.Y. – Pro Ron Nelson of Berrien Springs, Michigan, brought a five-bass limit weighing 19 pounds, 8 ounces, to the scale Saturday to win the Costa FLW Series Northern Division opener on Lake Champlain presented by Power-Pole. Nelson’s three-day total of 15 bass weighing 60 pounds even was enough to earn him the top prize of $96,700 including a new Ranger Z518 with a 200-horsepower outboard engine.

Nelson primarily fished the north end of the main lake around the Gut, which is the passage between Grand Isle and South Hero. He targeted smallmouth bass on beds, and largemouth near reeds, grass and docks. In the end, Nelson ended up weighing all smallmouth throughout the week.

“I caught my fish mostly sight-fishing this week. I found the beds pre-fishing and tried to find ones both deeper and shallow that the other anglers had missed,” said Nelson, who earned his third career FLW Series victory. “I fished beds that weren’t visually obvious to the average angler, and that made a big difference. I caught fish around guys all week. I didn’t have a secret spot or anything like that.

“I knew I had a lot of smallmouth from practice and figured I’d try to find as many as I could in the 4-pound category, and then kind of go blind-fishing for largemouth after I caught a solid bag of smallmouths,” Nelson continued. “On Day One, after I had my smallmouths, I actually ran to a largemouth spot and lost one in the 5-pound range that I thought would really hurt me, but I was fortunate enough to have a solid limit of smallmouth.”

Nelson caught his smallmouth on a Watermelon Gold-colored Poor Boy’s Erie Darter and a translucent Reaction Innovations Smallie Beaver rigged on a 1/4- or 3/16-ounce darter head. When he fished for largemouth, Nelson used a Yamamoto Senko and a jig.

“Today I switched to using the Darter on a drop-shot rig for a little bit because of the wind, but mostly fished the jighead,” said Nelson. “I was really happy with my equipment – everything worked well. I’m fishing the new 520L Ranger and it was a really nice haul.”

Nelson said one of the key parts to his success was how he broke down his areas.

“My biggest thing was being thorough and learning an area – that was the best strategy,” said Nelson. “There was no secret part of the lake that had bigger fish. It was tempting to find a 4-pounder then run five miles for another 4-pounder, but there might be another one only a hundred yards away. I’d find a solid fish and build off of it, and then go to another area and do the same thing.”

Cory Johnston and Gary Krammes of Pottsville, Pennsylvania, each weighed a 5-pound, 10-ounce bass to tie for the biggest bass of the tournament in the Pro Division. For their catches, each earned a Boater Big Bass award of $300.

Kevin Hesson of Seneca, Pennsylvania, won the Co-angler Division and a Ranger Z175 with a 90-horsepower outboard motor. Hesson earned his win with a three-day cumulative catch of 15 bass weighing 49 pounds, 15 ounces.

Gerard Capizzi of Rutherford, New Jersey, caught the biggest bass of the tournament in the Co-angler Division Thursday, a fish weighing 4 pounds, 6 ounces that earned him the day’s Co-angler Big Bass award of $200.