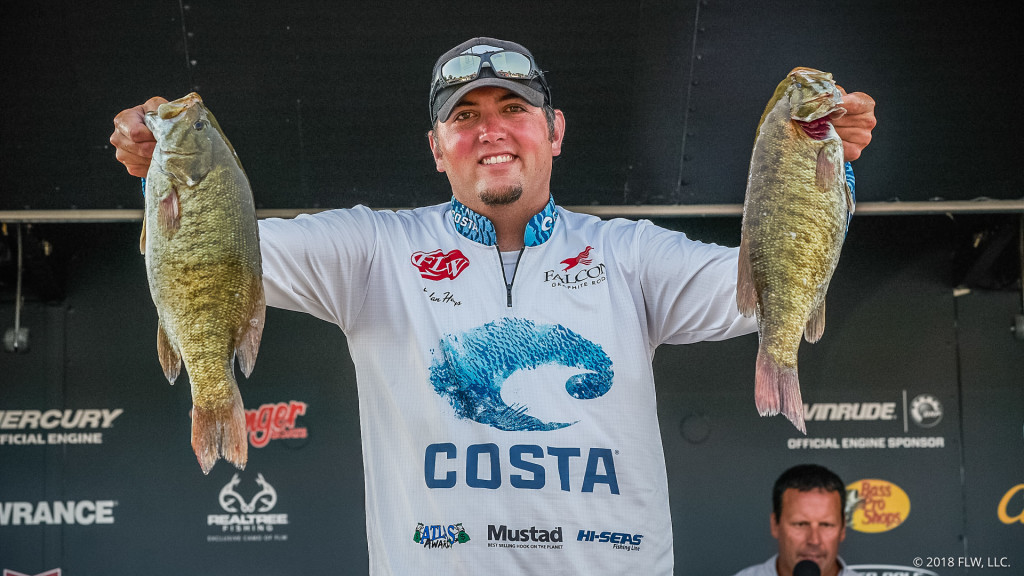 DETROIT, Mich. (June 30, 2018) – After catching the heaviest limit of what has already been a record-breaking event on Friday, Costa pro Dylan Hays of Sheridan, Arkansas, added another limit of smallmouth bass weighing 22 pounds, 6 ounces, to move into the lead Saturday at the FLW Tour at Lake St. Clair presented by Mercury.

The field is now trimmed to the final 10 pros for Championship Sunday, and Hays (15 bass, 72-3) will start with a 15-ounce lead over second-place pro Chad Grigsby of Maple Grove, Minnesota, (15 bass, 71-4) who led the first two days of competition. Also in striking distance in third place is the 2015 Forrest Wood Cup Champion, Brad Knight of Lancing, Tennessee, (15 bass, 70-6). Knight, who weighed in Saturday’s lone 25+ pound limit, has been sharing water with Hays throughout the week.

“We both found a pretty special area, and we’re having a lot of fun out there,” said Hays, who is fishing in his 14th career FLW Tour event. “Brad watched me catch them yesterday, and I watched him catch them today. I think it’s going to come down to whomever can catch 25 pounds tomorrow is going to win it.”

Hays said that the fishing was a little bit tougher Saturday, despite weighing his third-consecutive limit in excess of 22 pounds. On the first two days of competition he said he would catch 12 to 15 keepers each day and leave the area by 10:30 a.m. On Saturday he stayed in the area all day, but only managed a dozen keepers all day long.

“The biggest factor here has been trying to keep the smallmouth on,” Hays said. “They come up and jump, flip, windmill and somersault. I’ve lost my biggest fish every day this week and you can’t do that and win. But, luckily, there has been enough quality there to make up for it.

“It’s not one school of fish, but a bunch of little groups of fish,” Hays continued. “It really comes down to relocating them every day. Today, Brad found a school of 4- and 5-pounders. Yesterday, I found two key groups and had a big day.

“It’s nice to have a little cushion, but 15 ounces isn’t nothing here. I could catch 22 and Chad can catch 23, it’s no different. It’s all going to come down to who can get the best bite and put them in the boat.”

The top 10 pros advancing to the final day of competition on Lake St. Clair are:

Finishing in 11h through 30th are:

Overall there were 149 bass weighing 572 pounds, 15 ounces caught by pros Saturday, Twenty-nine of the final 30 pros were able to bring a five-bass limit to the scale.

Anglers were also vying for the prestigious 2018 FLW Tour Pennzoil Marine Angler of the Year (AOY) title that is determined by the most points accumulated over the seven Tour events in 2018.

For the first time in his career, General Tire pro Mark Rose of West Memphis, Arkansas, wrapped up the AOY title on Saturday. He narrowly edged out the 2015 AOY, pro Scott Martin of Clewiston, Florida, by just 14 points in a tightly contested race that was too close to call until Martin’s 17th place finish today. Rose, who received $100,000 for the title, will also receive an automatic berth into the 2019 Forrest Wood Cup.

Pro Matt Becker of Finleyville, Pennsylvania, clinched the 2018 FLW Tour Rookie of the Year award Friday, which is awarded to the rookie pro angler who finishes the season with the highest point total.

Mark Myers of Cedar Falls, Iowa, won the Co-angler Division and $20,000 Friday with a two-day total of 10 bass weighing 42 pounds, 4 ounces, followed by Billy Messer of Spartanburg, South Carolina, who finished in second place with 10 bass totaling 41-4, worth $7,550.

Throughout the season, anglers are also vying for valuable Angler of the Year (AOY) points in hopes of qualifying for the 2018 Forrest Wood Cup, the world championship of professional bass fishing. The 2018 Forrest Wood Cup will be on Lake Ouachita in Hot Springs, Arkansas, Aug. 10-12 and is hosted by the Arkansas Department of Parks and Tourism and Visit Hot Springs.

In FLW Tour competition, pros and co-anglers are randomly paired each day, with pros supplying the boat, controlling boat movement and competing against other pros. Co-anglers fish from the back deck against other co-anglers. The full field of 360 anglers competed in the two-day opening round. Co-angler competition concluded following Friday’s weigh-in, while the top 30 pros based on their two-day accumulated weight advanced to Saturday. Only the top 10 pros now continue competition Sunday, with the winner determined by the heaviest accumulated weight from the four days of competition.

The total purse for the FLW Tour at Lake St. Clair presented by Mercury is more than $930,000. The tournament is hosted by the Detroit Sports Commission, Macomb County, the Huron-Clinton Metroparks Authority and the Sterling Heights Regional Chamber of Commerce.

The final 10 anglers will take off at 6:30 a.m. EDT Sunday from the Lake St. Clair Metropark, located at 31300 Metro Parkway, in Harrison Township. Sunday’s weigh-in will also be held at the park, beginning at 4 p.m.

Prior to the weigh-ins Sunday, FLW will host a free Family Fishing Expo at the Lake St. Clair Metropark from noon to 4 p.m. The Expo is a chance for fishing fans to meet their favorite anglers, enjoy interactive games, activities and giveaways provided by FLW sponsors, and learn more about the sport of fishing and other outdoor activities.

Television coverage of the FLW Tour at Lake St. Clair presented by Mercury will premiere in high-definition (HD) on NBC Sports Network (NBCSN) Aug. 8 from Noon-1 p.m. EST. The Emmy-nominated "FLW" television show airs on NBCSN, the Pursuit Channel and the World Fishing Network and is broadcast to more than 564 million households worldwide.