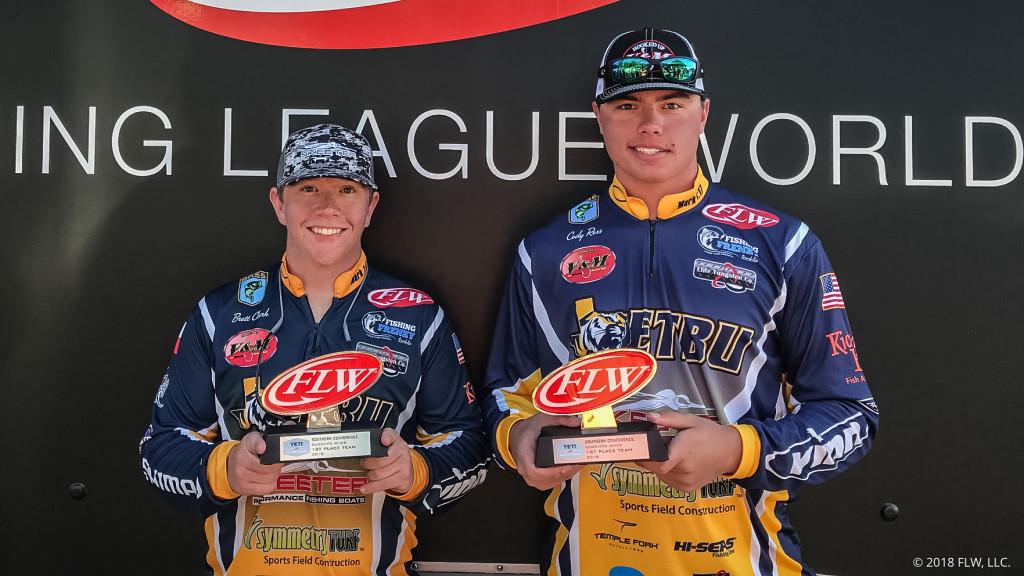 “We started fishing up north of the Pendleton Bridge,” said Clark, a junior majoring in marketing. “We were fishing a sharp drop – almost like a ledge. It was 4-feet deep on top, and we had our boat sitting off of it in 20 feet and were just casting up to it.”

“We didn’t catch any fish in the first 35 to 40 minutes, so we packed up and got our life jackets on and went to crank up the outboard motor and it wouldn’t go,” said Ross, a freshman business major. “We tried to get it going for 5 to 10 minutes, then started making some calls to try to scramble and get another boat. Brett was on the phone with our coach and I went to the front and made a couple of casts and ended up catching a good one on a V&M Wild Thang worm.

“Brett hung up with the coach and we spot-locked with our Minn Kota Ultrex and went back to fishing,” Ross continued. “We ended up catching all of our fish there and had our weight by 9:30 or 10 a.m. Once it happened, it happened very quickly.”

“One of our teammates’ dad happened to be fishing on Toledo Bend as well and was kind enough to let us borrow his boat to finish the day,” Ross said. “We tried fishing similar areas, but the wind had gotten up at that point and the new boat was a little smaller than what we were used to so we fished back into creeks and tried to stay out of the waves.”

“The key for us ended up being the one specific area where we were broke down,” Clark went on to say. “It allowed us to be extremely thorough and really pick apart the entire area. We were confident that we had enough to qualify for the National Championship, but we definitely didn’t expect to win.”