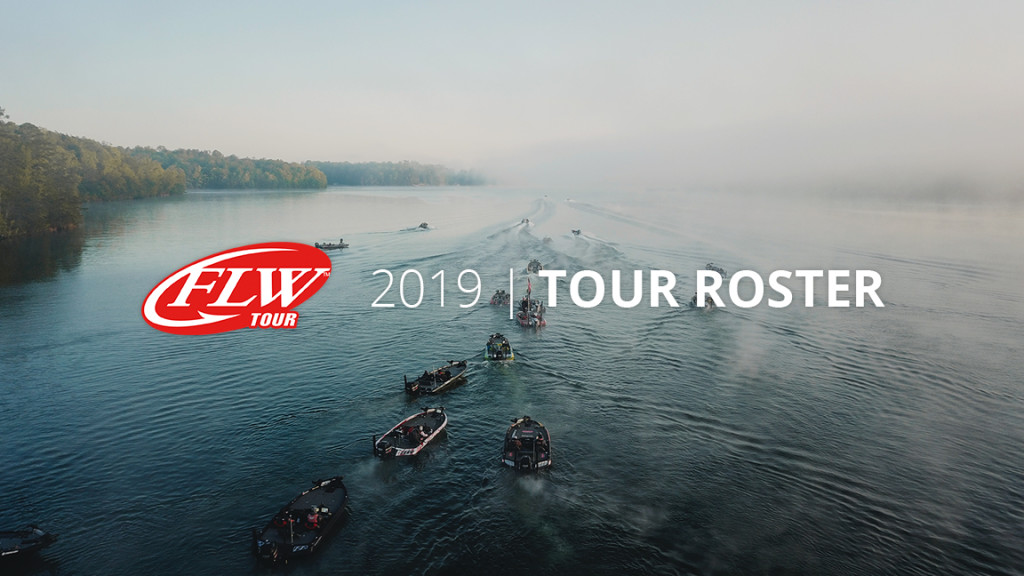 MINNEAPOLIS – Fishing League Worldwide (FLW), the world’s largest tournament-fishing organization, announced today the complete professional angler roster for the upcoming 2019 FLW Tour season, the 24th season of the FLW Tour. The field will be showcased along the 2019 FLW Tour, which features seven regular-season tournaments around the country with competition kicking off at Sam Rayburn Reservoir, Jan. 10-13, in Brookeland, Texas, and culminating with the world championship of bass fishing – the FLW Cup at Lake Hamilton, Aug. 9-11, in Hot Springs, Arkansas.

There was enormous demand to compete on the 2019 FLW Tour, with 210 anglers registering for a slot on the prestigious tournament circuit in its final year of priority registration before switching to a strict qualifying process and a 150-pro field in 2020. To accommodate all anglers earning priority entry through the 2018 FLW Tour, Costa FLW series, T-H Marine BFL All-American, YETI FLW College Fishing National Championship and TBF National Championship plus sponsor entries, the 2019 FLW Tour field will feature 170 pros.

The top award at each qualifier is $125,000 with $300,000 going to the winner of the FLW Cup. Since the final field exceeds the published payout basis of 150 pros, FLW will survey all 170 participating pros to finalize the 2019 payout structure.

The 2019 FLW Tour roster is headlined by a stout contingent of bass-fishing heavyweights, including three-time Angler of the Year (AOY) and 2003 FLW Cup champion David Dudley of Lynchburg, Virginia, 2015 AOY and 2011 FLW Cup champion Scott Martin of Clewiston, Florida, and two-time Angler of the Year Bryan Thrift of Shelby, North Carolina. They’ll be joined by bass-fishing legends Jimmy Houston of Cookson, Oklahoma, and Larry Nixon of Quitman, Arkansas, as well as three former FLW Cup champions – John Cox (2016), Brad Knight (2015) and Darrel Robertson (2002). James Niggemeyer of Van, Texas, the 2019 FLW Cup runner-up, and rising star Luke Dunkin of Lawrenceburg, Tennessee, are also among the top contenders for 2019. The 2019 Tour will also feature 34 rookies from around the country.

“With the demand we saw this year to join the FLW Tour, we couldn’t be more eager to kick off another season at Sam Rayburn Reservoir in January,” said Bill Taylor, FLW’s Senior Director of Tournament Operations. “FLW has long been the home to some of the most decorated bass anglers in the sport, and with the expanded live coverage at all of our Tour events this year, we are more than ready to show off their skills at some of the best fisheries in the world.”

In FLW Tour competition anglers are vying for valuable points in hopes of qualifying for the 2019 FLW Cup, the world championship of bass fishing. The 2019 FLW Cup will be held on Lake Hamilton and is being hosted by the Arkansas Department of Parks and Tourism and Visit Hot Springs.

For complete details and updated information, visit FLWFishing.com.  For regular updates, photos, tournament news and more, follow us on Facebook at Facebook.com/FLWFishing and on Twitter at Twitter.com/FLWFishing.