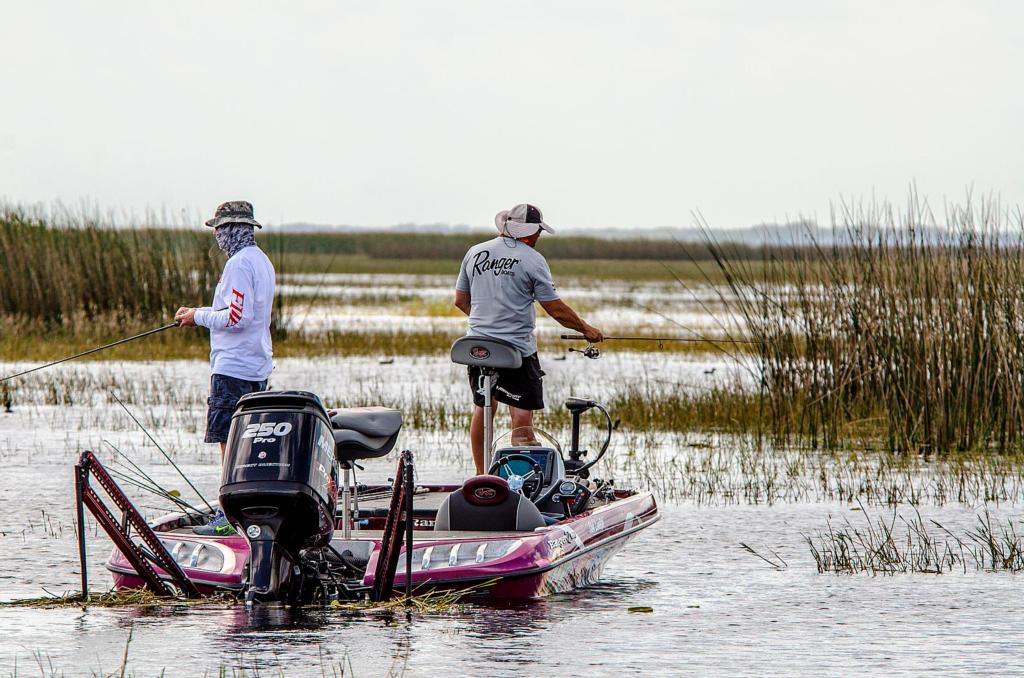 KISSIMMEE, Fla. – The Fishing League Worldwide (FLW) Tour, professional bass fishing’s most lucrative tournament circuit, heads to Lake Toho, Feb. 7-10, for the FLW Tour at Lake Toho presented by Ranger Boats. The event, hosted by Experience Kissimmee and the Kissimmee Sports Commission, will feature 170 of the world’s most decorated bass-fishing professionals casting for a top award of up to $125,000 cash in the Pro Division.

Now in its 24th season of competition, the FLW Tour has made the trek to Lake Toho five times in its history. When the circuit last visited in 2015, pro J.T. Kenney took top honors primarily working pad fields in Lake Toho and Lake Kissimmee with a black-and-blue stick worm. This year, the fishery is expected to host another productive week of bass fishing.

“If the weather slowly warms up it could be really good fishing. It’s possible to break 100 pounds [in four days] there,” said FLW Tour pro John Cox, a former FLW Cup champion with 12 career top-10 finishes in Florida – including one on Lake Toho. “I hear the water is still really high at Lake Toho, but the grass bite will probably be pretty good. There’s usually a couple of guys who figure out something in Kissimmee, Cypress and Hatchineha, too. There’s a lot of water to cover, and it’s always exciting when the Tour visits Florida.”

Cox predicted that the majority of the fish would be in the pre-spawn to spawn phase, but said that doesn’t necessarily mean close to the bank.

“There is not much spawning that happens inside the grass like in years past,” Cox said. “They used to scrape the lake and you’d have a nice clean bottom, but they haven’t scraped in a long time, so a lot of those fish actually spawn offshore now. There will be a lot of anglers out in the open-water hydrilla. Those bigger groups of fish are off the bank.”

Cox said that lipless crankbaits and Carolina rigs would be popular with anglers fishing off the bank, while Texas-rigged Yamamoto Senkos and Berkley Power Worms would likely see a lot of action shallow. The Florida veteran predicted it would take around 18 pounds a day – 72 pounds total – to win the tournament.

"We're thrilled to welcome the Fishing League Worldwide Tour to our destination," said John Poole, Executive Director of Kissimmee Sports Commission. "We pride ourselves on our area’s championship bass fishing lakes, which have been home to many marquee tournaments throughout the years. We appreciate the opportunity to host an event of this prestige and impact in the fishing industry, as well as raise awareness about the sport and the opportunities for anglers in the destination.”

The popular FLW Live on-the-water program will air on Days Three and Four of the event, featuring live action from the boats of the tournament’s top pros each day. Host Travis Moran will be joined by veteran FLW Tour pro Peter Thliveros to break down the extended action each day from 8 a.m. to 2 p.m. On-the-water broadcasts will be live streamed on FLWFishing.com, the FLW YouTube channel and the FLW Facebook page.

Prior to weigh-in each day FLW will host a free Family Fishing Expo at Big Toho Marina from 2 to 6 p.m. The Expo is a chance for fishing fans to meet their favorite anglers, enjoy interactive games, activities and giveaways provided by FLW sponsors, and learn more about the sport of fishing and other outdoor activities.

Also for youth, the FLW Foundation’s Unified Fishing Derby will be held at the marina on Saturday, Feb. 9, from Noon-2 p.m. The event is hosted by FLW Foundation pro Cody Kelley along with other FLW Tour anglers, and is free and open to anyone under the age of 18 and Special Olympics athletes. Rods and reels are available for use, but youth are encouraged to bring their own if they own one. The 1st and 2nd place anglers that catch the biggest fish will be recognized Saturday on the FLW Tour stage, just prior to the pros weighing in.

In FLW Tour competition, the full field of 170 pro anglers compete in the two-day opening round on Thursday and Friday. The top 30 pros based on their two-day accumulated weight advance to Saturday. Only the top 10 pros continue competition Sunday, with the winner determined by the heaviest accumulated weight from the four days of competition.