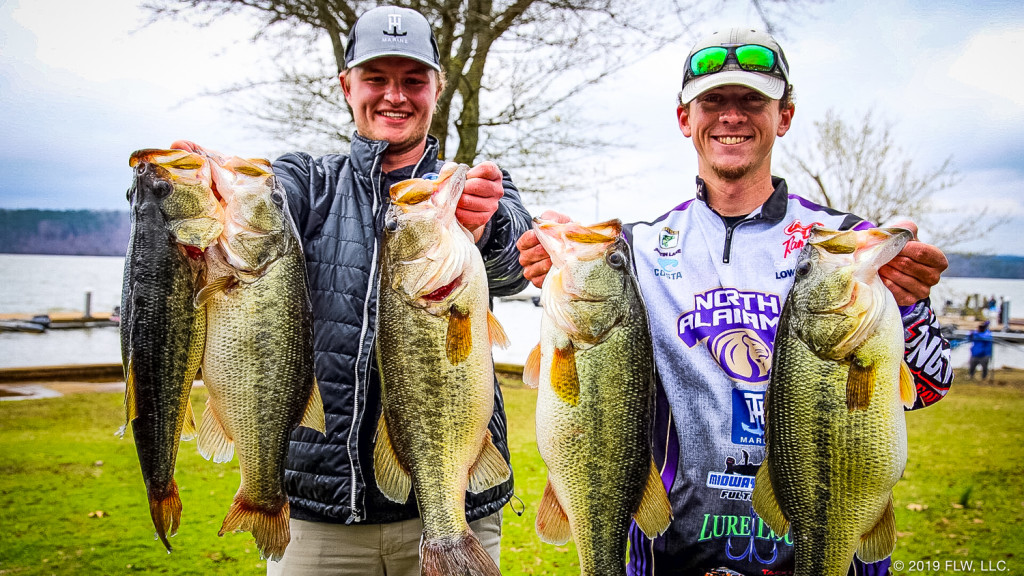 GUNTERSVILLE, Ala. – The University of North Alabama duo of Houston Calvert of Hayden, Alabama, and Justin Lane of Florence, Alabama, won the YETI FLW College Fishing event on Lake Guntersville presented by Bass Pro Shops Friday with a five-bass limit weighing 29 pounds, 3 ounces. The victory earned the Lion’s bass club $2,400 and a slot in the 2020 FLW College Fishing National Championship.

“We had three or four days of sunshine where it was 60 to 72 degrees, and I think a big wave was pushing up,” said Calvert, a senior majoring in marketing. “As you can tell, everybody found that. That’s the biggest weights I’ve seen in a college tournament. I really wanted it to be 30 pounds. I really thought we had 30. It was close, but maybe another time.”

“It’s just left me speechless, to be honest with you,” added Lane, a junior business management major. “It was one of those days you dream about. It’s just incredible that it happened in a tournament for us. That’s the biggest bag I’ve ever caught in my life.”

The warm spell Calvert described sort of fizzled by the tournament as a cold front brought lower temps and rain, which the team thinks caused some of the fish that were headed for the bank in practice to slide back out into hydrilla beds.

That’s where the Lions found their winning fish, targeting a single pocket all day long.

“We started out throwing a ChatterBait in grass in 6 to 8 feet,” Calvert said. “We probably had, I want to say, 12 pounds within 30 to 45 minutes of blast off. It rained there for two to three hours, and we just moved up on the bank with it raining. He [Lane] threw a Zoom Ultravibe Speed Worm, and I threw the NetBait Big Bopper. We were swimming them around hydrilla.”

The shallower shift mostly produced smaller bass due to all the bucks up on the bank, so once the rain quit, Lane and Calvert slid back out. Lane added a solid 4-plus keeper with a Rat-L-Trap, and gradually the team chipped away at a nice limit.

What sealed the deal was a pair of kickers late in the afternoon that left Calvert and Lane with a limit comprised of one keeper close to 7 pounds, three 6-pounders and one about 4.

“We saw some shad running in the grass,” Calvert recalled. “We sat down and cut off our green pumpkin and black and blue ChatterBaits and tied on a white ChatterBait with a Keitech FAT on the back of it. Once we changed to white, right before weigh-in we culled two – big time. I know we culled at 2:15, and once we made that last cull we put everything up and went to the ramp.

“I think if the weather was going to be warm next week they would be spawning,” Calvert went on to say. “They want to spawn so bad. There are a lot of bucks up shallow. We probably caught, I would say, 30 fish. Probably 20 of those were 2-pounders. The other 10 were anywhere from 3 to 6 pounds. Pretty much everybody I talked to caught 30 to 40 fish.”

The YETI FLW College Fishing event on Lake Guntersville presented by Bass Pro Shops was hosted by the Marshall County Convention and Visitors Bureau. It was the second of three regular-season qualifying tournaments for Southeastern Conference anglers. The next event for FLW College Fishing anglers will be the 2019 FLW College Fishing Open, March 12-13 at Kentucky Lake in Gilbertsville, Kentucky.

About FLW
FLW is the world’s largest tournament-fishing organization, providing anglers of all skill levels the opportunity to compete for millions in prize money in 2019 across five tournament circuits. Headquartered in Benton, Kentucky, with offices in Minneapolis, FLW and their partners conduct more than 290 bass-fishing tournaments annually around the world, including the United States, Canada, China, Italy, South Korea, Mexico, Portugal, South Africa and Spain. FLW tournament fishing can be seen on the Emmy-nominated “FLW" television show while FLW Bass Fishing magazine delivers cutting-edge tips from top pros. For more information visit FLWFishing.com and follow FLW at Facebook, Twitter, Instagram, and YouTube.