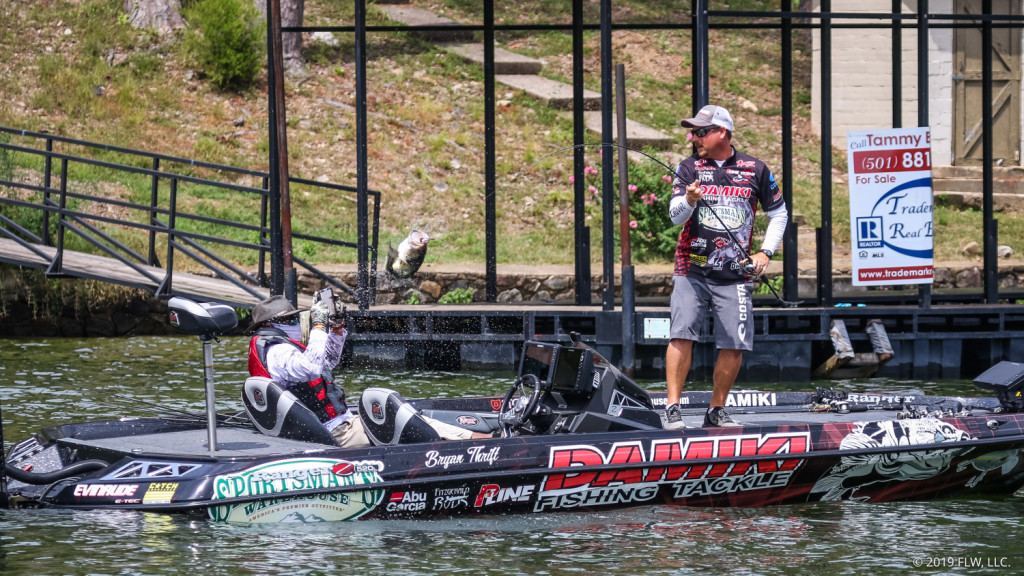 HOT SPRINGS, Ark. – Pro Bryan Thrift of Shelby, North Carolina, crossed the stage with a five-bass limit weighing 12 pounds, 7 ounces, for a two-day total of 10 bass weighing 27-10, to lead Day Two of the FLW Cup on Lake Hamilton. Thrift now holds a 1-pound, 8-ounce lead over pro Kyle Walters of Grant Valkaria, Florida, who weighed five bass weighing 12-5 – for a two-day total of 10 bass for 26-2 – in the championship tournament featuring 52 of the world's best professional bass anglers competing for a top prize of $300,000.

“Today was a long, trying day, but that’s the way I like it,” said Thrift, who has now made the top-10 cut in 10 of his 13 career FLW Cup appearances. “We like when it’s tough fishing at the Cup. I only had two fish at 12:30. I ended up getting six keeper bites, though – two good ones and three decent ones – but I have no idea what’s going to happen tomorrow.

“I ran a lot of the same stuff and a lot of new stuff today, and I caught my fish on most of the same baits as I did yesterday. But I didn’t catch any topwater fish today,” Thrift continued. “All of my fish came on a big worm and stuff like that in brush. I tried, but I just couldn’t get the topwater bite going. I’m going to try that again in the morning and see if I can get lucky. In my mind, that’s what I have to have to win.”

Thrift’s accomplishments and accolades in the sport of professional bass-fishing has long put him in discussion amongst fans and his peers as being one of, if not the, best of all-time. He has six career FLW Tour wins, 42 top-10 finishes and more than $2.7 million dollars in career earnings. One trophy that has eluded him thus far in his career, though, is the FLW Cup. Thrift is optimistic that he can slam the door Sunday.

“If I can catch a couple early, that would really calm me down and settle me in and give me the confidence to slow down and fish each place thoroughly,” Thrift went on to say. “I’m not going to die on any one pattern. I’m going to run around and fish and try to make the best of it, and hopefully I can stumble into a few.”

The top 10 pros that advanced to the final day of competition on Lake Hamilton are:

Fans will be treated to the FLW Expo at the Hot Springs Convention Center located at 134 Convention Blvd., in Hot Springs, from 10 a.m. to 4:30 p.m. prior to the weigh-ins. The Expo includes activities, giveaways and games provided by more than 40 FLW sponsors, as well as the opportunity to shop the latest and greatest tackle and outdoor gear from more than 100 exhibitors – including multiple kayak-fishing companies in the Expo’s new Kayak Village. The opportunity to meet and interact with top professional anglers, including Hank Parker, Jimmy Houston, and many more also awaits fishing fans.

On Sunday the first 250 children 14 and under who are accompanied by an adult will receive a voucher to redeem for a free rod-and-reel combo after the evening’s weigh-in from Shakespeare rods. On Saturday, one lucky fishing fan will win a brand new Jackson Kayak Coosa FD following the weigh-in, and on Sunday a new Ranger Z521L bass boat with a 250-horsepower Evinrude or Mercury outboard motor bill be awarded. The Kayak and Ranger Boat giveaways are free to enter but the winner must be present at the conclusion of each day’s final weigh-in to win.

FLW fans will also enjoy the Bass & BBQ Festival in conjunction with the FLW Expo. FLW has partnered with the Arkansas Democrat Gazette to feature award-winning BBQ teams offering delicious fare to visitors and raising money for local charities. Come enjoy all of the fishing action and barbeque from top barbeque teams on Sunday 10 a.m. to 4:30 p.m. and help raise money for some worthy causes.

Country music superstar Trace Adkins will perform a free concert on the weigh-in stage at the Bank OZK Arena on Sunday, starting at 4 p.m., prior to the final weigh-in. The concert is presented by Realtree and KSSN 96. Adkins will be showcasing his fiery and memorable live performance to fishing fans in Arkansas as well as live-streamed to fans around the globe at FLWFishing.com.