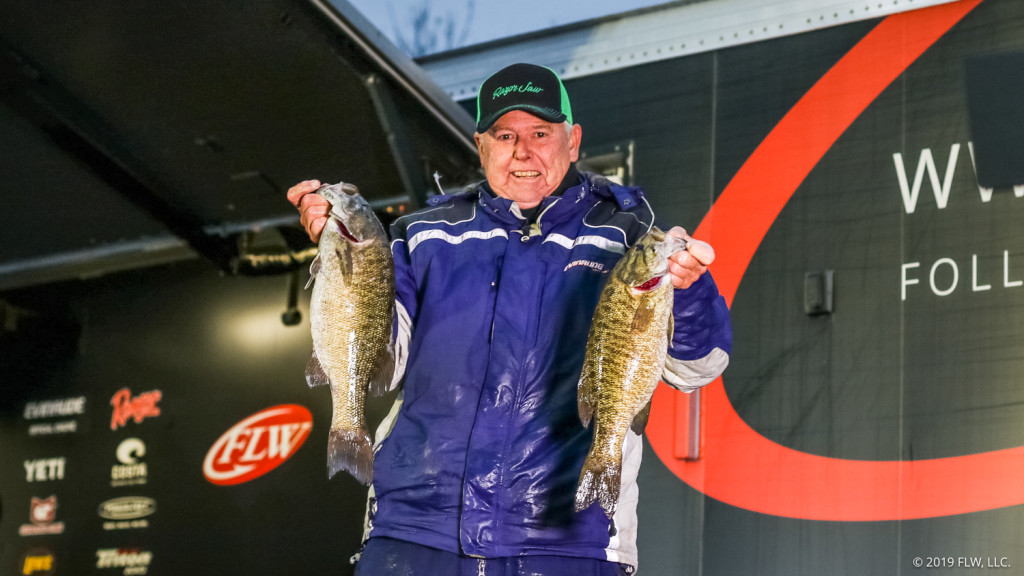 BURNSIDE, Ky. – A tournament field of 193 boats – each featuring a pro and a co-angler – began their three-day competition for a top cash award of $100,000 at the Costa FLW Series Championship on Lake Cumberland, in Burnside, Kentucky, Thursday. The no-entry fee bass-fishing championship, hosted by the Somerset Tourist & Convention Commission and the Burnside Tourism Commission, features the top 40 professionals and top 40 co-anglers from each of five U.S. FLW Series divisions, plus two pros and two co-anglers from each international country that competes in the FLW Series.

Cousens competed in the U.S. a few times in the 1990s, but the Evinrude and Mercury outboard technician has never fished a pro-level event with as much on the line as this one. Cousens’ limit that he weighed in Thursday included a mix bag of largemouths and smallmouths.

“It feels fantastic right now,” Cousens said. “It’s pretty hard to believe that I’m leading a tournament of this caliber with this number of anglers. It’s pretty amazing.”

Cousens said he’s a big-bass specialist, which he’s proven in his last two FLW events. To qualify for this week’s championship, he weighed in more than 100 pounds in three days of fishing at the FLW Zimbabwe Championship.

Thursday, despite miserable, rainy, windy weather, he caught a better quality of bass than many of his competitors.

“I fish for big fish back home,” Cousens said. “My game plan is not to go and catch five little fish. I go and throw big baits, and I want to catch five big fish. I fish a lot of tournaments back home, and it’s paid off over the years; just going for big fish.

“A bass is a bass,” he continued. “I brought my style of fishing from home. When I was preparing to come here, I looked at the lake on Google Earth and spent a lot of time studying it. I purposely did not look at any sort of fishing hints. I just wanted to come here with a totally open mind and just do my own thing. My practice was tough, but I caught a couple of nice fish and left the areas immediately. As soon as I’d catch a fish I’d leave. I went back to those areas today, and they panned out.”

Though he caught most of his fish in one area today, Cousens said he does have a pattern that’s working. He was able to get a couple of key bites on the way back to the ramp in the afternoon. He’s admittedly uncertain of what to expect from Cumberland tomorrow, when wind and rain will be replaced with sunshine, slick-calm water and temperatures that might dip below freezing in the morning, but he’s still confident in his ability to get big bites.

The top 20 pros after Day One on Lake Cumberland are:

Mason Roach of Conroe, Texas, leads the co-angler division with five bass weighing 13 pounds, 3 ounces, followed by Zack Freeman of Russellville, Arkansas, who weighed five bass totaling 12-12, good for second place. Co-anglers are casting for a top prize of $35,000, including a new Ranger Z175 with a 115-horsepower outboard.

The top 20 co-anglers after Day One on Lake Cumberland are:

Anglers will take off from the General Burnside Island State Park, located at 8801 S. Hwy. 27 in Burnside, at 8 a.m. EDT each morning. Each day’s weigh-in will be held at the State Park beginning at 4 p.m. All takeoff and weigh-ins are free and open to the public.

The popular FLW Live on-the-water program will air on Friday and Saturday – Days Two and Three of the event – featuring live action from the boats of the tournament’s top pros each day. Host Travis Moran will be joined by four-time FLW Tour Angler of the Year, Polaris pro David Dudley to break down the extended action each day from 8 a.m. to 2 p.m. On-the-water broadcasts will be live streamed on FLWFishing.com, the FLW YouTube channel and the FLW Facebook page.