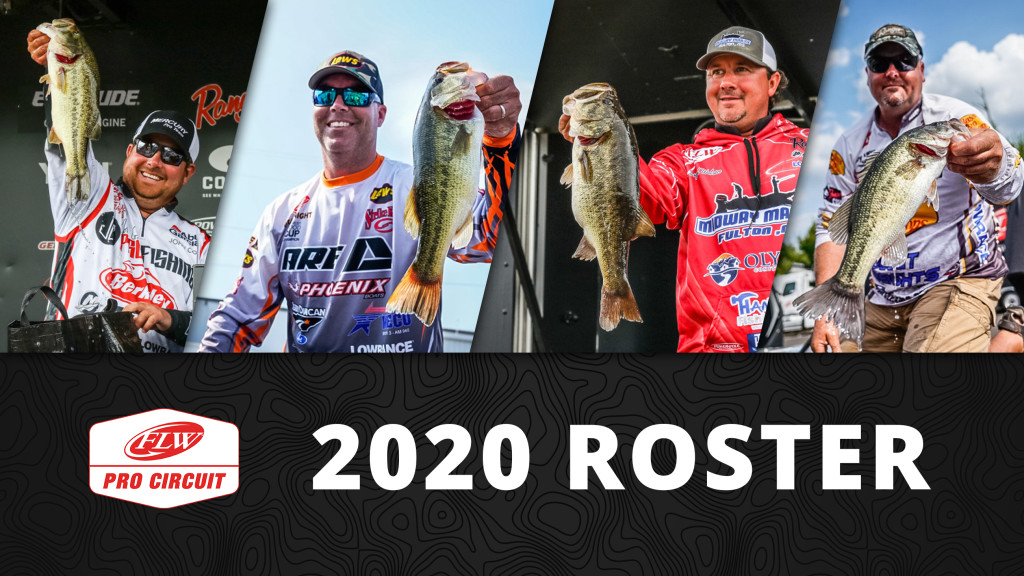 “We couldn’t be more thrilled to introduce this exceptional field of professional anglers,” said Kathy Fennel, FLW Executive Vice President and General Manager. “Many of the most decorated pro anglers in the sport have gotten their start at FLW, and we expect our 2020 season to be one of the most exciting, competitive seasons in our history.”

The 2020 FLW Pro Circuit roster is headlined by a stout contingent of bass-fishing professionals, including former FLW Cup champions Brad Knight (2015), John Cox (2016) and Darrel Robertson (1999) along with former All-American champions Nick LeBrun (2018), Jeremy Lawyer (2016) and Troy Morrow (2010). They will be joined by bass-fishing legends Larry Nixon – after recovering from shoulder surgery – and Gary Yamamoto, along with veteran FLW stalwarts such as Terry Bolton, Greg Bohannan and Chad Grigsby.

The 2020 FLW Pro Circuit will also showcase rising stars like Bradford Beavers, the 2018 FLW Series champion; Joseph Webster, the 2017 TBF “Living the Dream” angler; and the McMillan brothers – Brandon and Jared – whose bass-fishing pedigree puts them in contention at almost any tournament, no matter the type of fishery. The 2020 FLW Pro Circuit will also feature 28 rookies from around the country, including the 2019 TBF “Living the Dream” winner Preston Craig. Medical and/or hardship exemptions were granted to Evan Barnes, Larry Nixon, Robert Pearson, Pete Ponds and Chris Whitson.

The field will be showcased across seven regular-season tournaments around the country with competition kicking off at Sam Rayburn Reservoir, Jan. 23-26, in Brookeland, Texas, and culminating with the FLW TITLE championship on the St. Lawrence River, Aug. 8-13, in Massena, New York.

The top award at each regular-season tournament is $100,000 with $200,000 going to the FLW TITLE champion. Since the final field exceeds the published payout basis of 150 pros, FLW will survey all 155 participating pros to finalize the 2020 payout structure.

“I’m super excited to be fishing again in 2020,” said pro Greg Bohannan of Bentonville, Arkansas, a 13-year FLW veteran with more than $830,000 in career earnings. “We’ve got a great schedule – I’m especially excited for Lake Dardanelle because I played college football there and spent a lot of time on that fishery. I think we’ve got a very bright future ahead of us with the combined synergies of FLW and Major League Fishing.”

The 2020 FLW Pro Circuit will have 156 two-hour airings on network television, including 26 consecutive weeks of Friday night primetime airing on Outdoor Channel and 130 airings on Sportsman Channel for a total of 312 hours of FLW Pro Circuit programming. In addition to the tradition of live streaming the weigh-in, each of the final two days of competition will feature live-on-the-water coverage across 18 cameras. Fans can catch 54 hours of live action as it unfolds on FLWFishing.com and MyOutdoorTV (MOTV).

“I think that some people always look at mergers and acquisitions a little skeptical, but MLF has been very up front and willing to listen to the anglers,” said pro Terry Bolton of Paducah, Kentucky, a 24-year FLW veteran with 48 career top-10 finishes. “They have demonstrated that they are willing to listen and change things to benefit their customers – us, the anglers – and I think that is a very good thing. The new Pro Circuit will be different, but it’s a lot of the same old faces with some new twists involved and I think it brings a new energy to the tournaments. There are several lakes on the schedule that I am really looking forward to and I’m excited to get back at it.”

About FLW
FLW is the world’s largest tournament-fishing organization, providing anglers of all skill levels the opportunity to compete for millions in prize money across five tournament circuits. Headquartered in Benton, Kentucky, FLW and its partners conduct more than 290 bass-fishing tournaments annually around the world, including in the United States, Canada, China, Italy, South Korea, Mexico, Namibia, Portugal, South Africa, Spain and Zimbabwe.

FLW tournament fishing can be seen on the Emmy-nominated “FLW” television show while Bass Fishing magazine delivers cutting-edge tips from top pros. Acquired by Major League Fishing in late 2019, FLW will expand programming in 2020 to the Outdoor Channel and the Sportsman Channel as well as on-demand at MyOutdoorTV (MOTV).