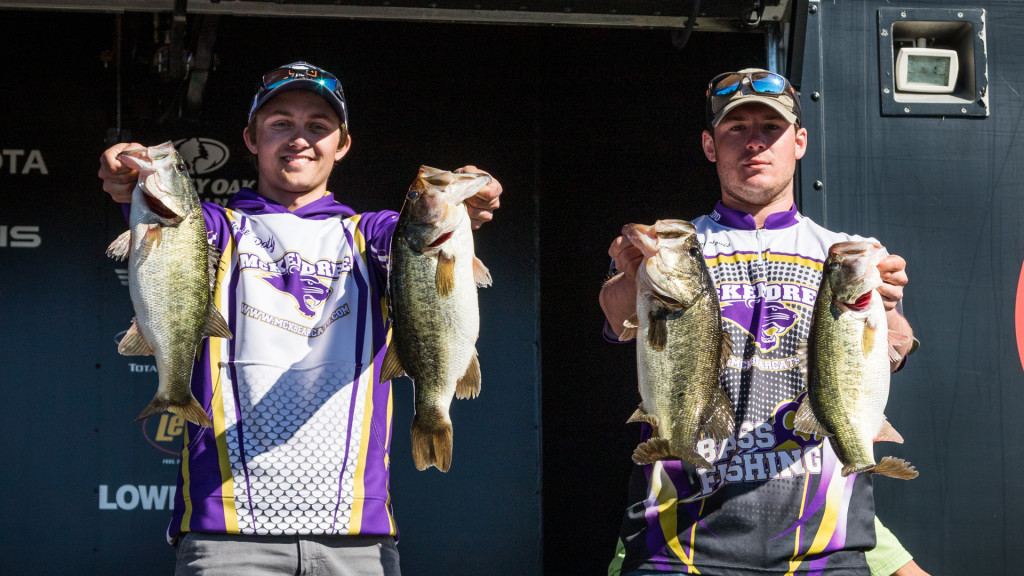 LEESBURG, Fla. – Illinois’ McKendree University’s team of Nathan Doty and Jacob Louis moved to the top of the leaderboard Thursday on Day Two of the 2020 Abu Garcia College Fishing presented by YETI College Fishing National Championship presented by Lowrance at the Harris Chain of Lakes after bringing a five-bass limit to the scale weighing 20 pounds, 2 ounces. The Bearcat angler’s two-day total of 10 bass weighing 42-12 gives them a 5-pound, 1-ounce lead over the second-place team, Tennessee’s Bryan College, as the event heads into the third and final day of competition Friday.

“We had the exact same gameplan as yesterday – we went to our first spot and we sat there for the entire day,” said Doty, a junior majoring in Environmental Science. “We didn’t have to change our baits, but we definitely changed the technique. Yesterday we were catching quite a few fish on a Speed Worm – cranking it. This morning with the cold front, we had to really slow down.”

“It’d come in a flurry for about five minutes – bite after bite after bite – than it’d be dead for an hour,” said Louis, who recently graduated with a degree in Environmental Science. “It’s an offshore grass area with a transition into a little spawning bay. I think the fish our sitting are out there, waiting to pull up.”

The McKendree duo said that all of their keepers Thursday came on the Zoom Speed Worm, but mentioned that they had added a few key bass earlier in the week on a spinnerbait. They estimated that they caught around a dozen fish throughout the day and left early hoping to conserve fish for the final day.

“Everything that we caught today seemed to be the same quality-size of fish,” Louis said. “Once we had our weight we laid off them and were done fishing by 12:30.

“We’ve got a similar spot right across the lake that we caught a couple of keepers on yesterday as an option for tomorrow,” Louis went on to say.

“It’s Jacob’s last tournament, so we’re going to give it our all tomorrow, no matter what,” Doty added.

The three-day event features the top college bass fishing teams from across the nation competing in an internationally televised, no-entry fee tournament for a $30,000 prize package, including a new Phoenix 518 Pro bass boat with a 115-horsepower Suzuki outboard. In addition to the boat package, both members of the winning team will advance to the 2020 FLW Series Championship, Nov. 5-7 on Lake Cumberland in Burnside, Kentucky, where they will compete for a top prize of $200,000.

The full field of 156 teams competed on Wednesday and Thursday, with only the top-10 – based on two-day cumulative weight – advancing to Championship Friday. The National Champions will be crowned Friday based on the cumulative three-day weight total.

The top 10 teams that now advance to Championship Friday on the Harris Chain of Lakes are:

The Abu Garcia College Fishing presented by YETI National Championship presented by Lowrance on the Harris Chain of Lakes is hosted by Lake County, Florida.