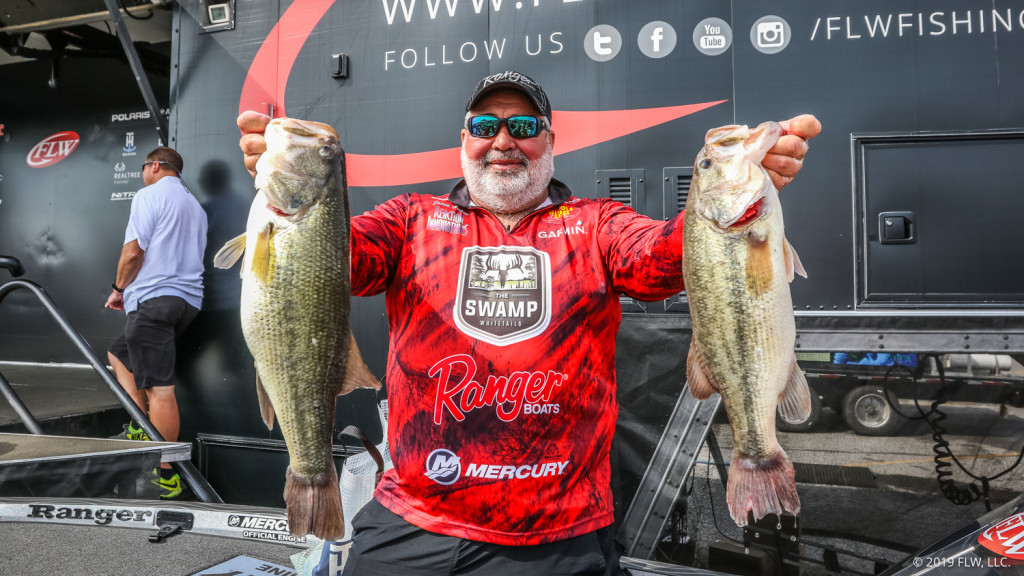 ALEXANDER CITY, Ala. – The third event of the 2020 season for the Tackle Warehouse Pro Circuit, professional bass fishing’s premier five-fish limit tournament series, kicks off next week, March 19-22 with the Tackle Warehouse Pro Circuit at Lake Martin. Hosted by the Alexander City Chamber, the tournament will feature 154 bass-fishing professionals from around the world competing for a top award of up to $135,000 and valuable points in hopes of qualifying for the 2020 FLW TITLE, the Pro Circuit Championship.

“Lake Martin is a really good place to fish, and it really allows guys to fish to their strengths,” said Pro Circuit angler Jamie Horton of Centerville, Alabama, who has 21 career top-10 finishes in FLW competition. “The fishing has been good and with the way the weather is setting up the lake should be on fire. I think we’re fixing to see a really, really good tournament.

“Spotted bass will be a very big factor,” Horton continued. “The spots have gotten so much bigger because of the herring and there are just so many more of them now. That being said, I think it’ll take a mixed bag of spotted bass and largemouth bass to win the tournament. I don’t think we’ll see too many limits of just largemouth. The key to doing well will be guys that figure out how to catch them both.”

Horton said that the bass are still in their prespawn phase, and he expects Carolina rigs and crankbaits to be strong options for competitors.

“The fish are heavy and the lake is prime – I definitely think we’ll see a 20-pound stringer or two,” Horton went on to say. “I think it’ll take a two-day total around 24½ pounds to cash a check, and I think the winner will have right around 16 pounds a day – 64 pounds over four days. Those weights are a little higher than normal, but the weather has been stable and the lake is full. It’s going to be a fun tournament.”

“Lake Martin and Alexander City are ecstatic about hosting FLW in mid-March,” said Ed Collari, President & CEO of the Alexander City Chamber of Commerce. “With over 45,000 acres and 800 miles of shorelines, we are honored to be sharing our treasured lake and vibrant community with many of the best anglers in the world, as well with their families and fans.”

For youth, the FLW Foundation’s Youth Fishing Derby will be held at Wind Creek State Park on Saturday, March 21 from 1 p.m.-3 p.m. The event is hosted by Tackle Warehouse Pro Circuit anglers and is free and open to any youth 14 and under. Rods and reels are available for use, but youth are encouraged to bring their own if they own one. The 1st and 2nd place anglers that catch the biggest fish will be recognized Saturday on the FLW Pro Circuit stage, just prior to the pros weighing in. The first 50 youth registered will receive a free goodie bag. Youth can register on-site or pre-register by emailing [email protected].

As part of the Tackle Warehouse Pro Circuit’s community outreach initiative, Pro Circuit anglers including Aaron Britt, Chris Neau and Jeff Dobson will volunteer their time at the Lake Martin Animal Shelter, located at 2502 Sugar Creek Road in Alexander City. Anglers will help with animal cleanup and visit with visitors and staff to give tips and tactics for local fisheries, snap photos, sign autographs and share fishing stories.

The popular FLW Live on-the-water broadcast will air on Days Three and Four of the event, featuring live action from the boats of the tournament’s top pros each day. Host Travis Moran is joined by Toyota Series pro Todd Hollowell to break down the extended action each day from 8 a.m. to 2 p.m. On-the-water broadcasts will be live streamed on FLWFishing.com, the FLW YouTube channel and the FLW Facebook page.

In Tackle Warehouse Pro Circuit competition, the full field of 154 pro anglers compete in the two-day opening round on Thursday and Friday. The top 30 pros based on their two-day accumulated weight advance to Saturday. Only the top 10 pros continue competition Sunday, with the winner determined by the heaviest accumulated weight from the four days of competition.