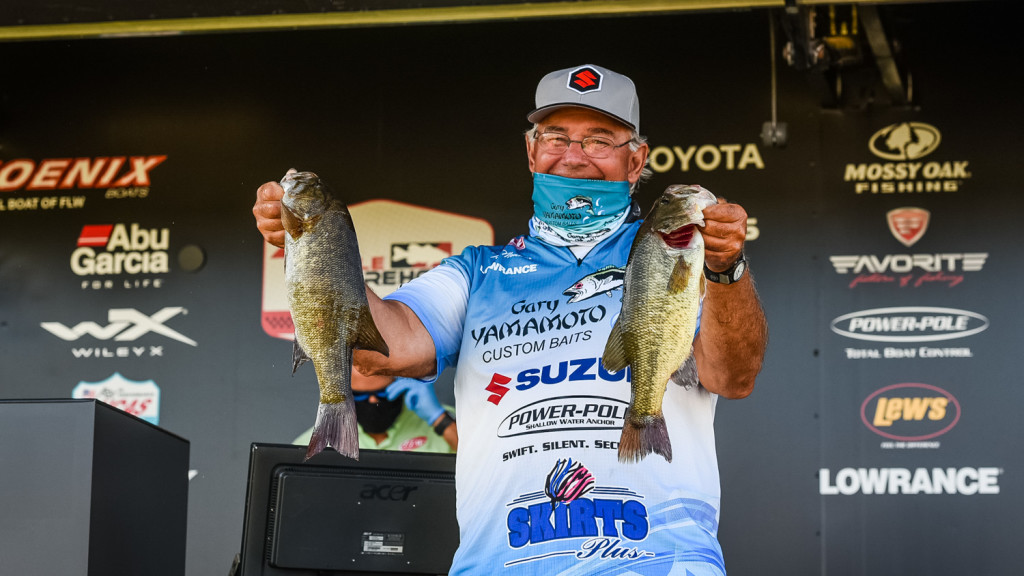 LA CROSSE, Wis. – Local pro Tom Monsoor of La Crosse, Wisconsin, caught a five-bass limit weighing 14 pounds, 8 ounces, to vault to the top of the leaderboard on day two of the Tackle Warehouse Pro Circuit at the Mississippi River presented by OPTIMA Batteries in La Crosse. Monsoor’s two-day total of 10 bass weighing 28-11 will give him a 12-ounce advantage as the event enters into day three of competition in the four-day Super Tournament that features 200 of the world’s best bass-fishing anglers from FLW and Major League Fishing (MLF) competing for a top cash award of up to $160,000.

After starting the day in seventh place, Monsoor caught a limit in Pool No. 8 consisting of two smallmouth and three largemouth bass Thursday to move into first place. He says that the tournament is still completely up for grabs with two days of competition remaining and the fishery changing each day.

“I can’t believe that the River has been fishing as tough as it has been, but I had more weight today than I did yesterday so I guess it wasn’t too bad,” said Monsoor, a 17-year FLW pro veteran who has 25 previous top-10 finishes on the Mississippi River in FLW competition. “Yesterday I started out in Pool 7 and it did not work out. My two starting spots I didn’t get a bite – and I thought I could catch a limit at both. But that’s La Crosse – it can change overnight.

“Today I hunkered down in Pool 8 and it worked out a little better,” Monsoor continued. “I tried everything. I threw a topwater, I threw a popper, I threw a buzzbait, a football jig, a swimming jig, a Senko, and a homemade Bitsy Bug. All my weight is coming on the jig, but I’m trying other stuff. I see some big fish feeding but they ain’t biting. I don’t know why, yet.”

Monsoor said he remains on the lookout for the “big bite”, and that he almost had it in the boat late yesterday.

“Near the end of the day yesterday I thought I had snagged a stick, because it wasn’t fighting – it wasn’t moving. Then it came to the surface and opened its mouth – it was a 4- or 5-pounder – and the hook flew out. I’ve got good hooks, but the fish just didn’t get all of it. That bass would have been another couple of pounds, at least.

“That’s why this is still anybody’s tournament,” Monsoor went on to say. “I could get nothing tomorrow, and somebody else can catch a big bag. You can just stumble into them. I’m going to keep looking because I haven’t really found them yet.”

The top 20 pros after day two on the Mississippi River are:

Jim Tutt of Longview, Texas, won the $500 Berkley Big Bass award Thursday in the pro division after bringing a fish weighing 4 pounds, 10 ounces to the scale.

In Tackle Warehouse Pro Circuit Super-Tournament competition, the full field of 200 pro anglers competed in the two-day opening round on Wednesday and Thursday. The top 50 pros based on their two-day accumulated weight now advance to Friday. Only the top 10 pros will continue competition on Championship Saturday, with the winner determined by the heaviest accumulated weight from the four days of competition.

Anglers will take off at 7 a.m. CDT each day from Stoddard Park, located at 502 Forest Lane, in Stoddard. The weigh-in each day will also be held at Stoddard Park and will begin at 4 p.m. Attendance is limited to competing anglers and essential staff only. Fans are encouraged to forgo the daily takeoffs and weigh-ins and follow the event online through the expanded four-day “FLW Live” on-the-water broadcasts and weigh-in coverage at FLWFishing.com.