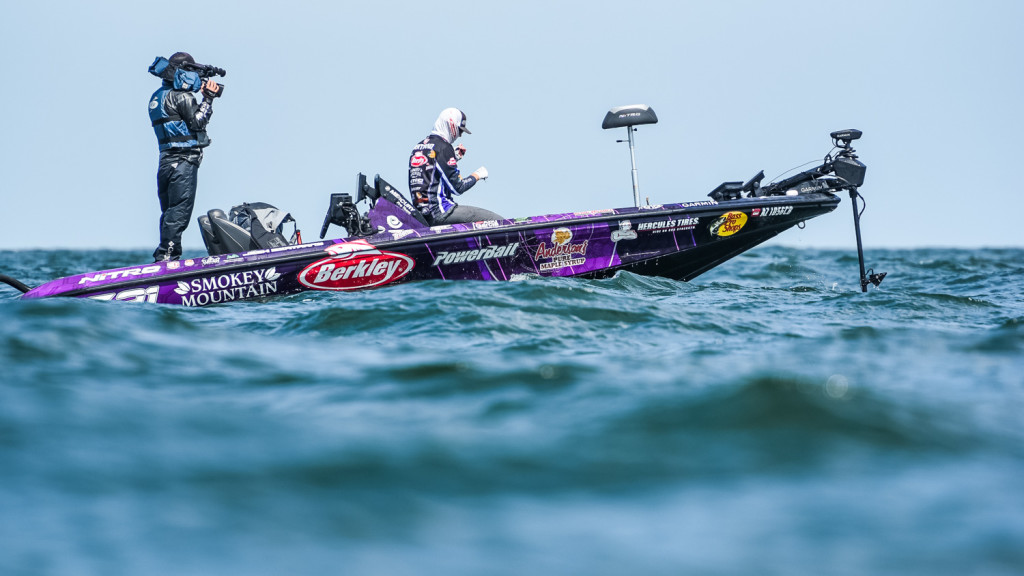 SANDUSKY, Ohio – The stage is now set for a dramatic regular-season finale Friday at the Tackle Warehouse Pro Circuit at Lake Erie. The top 10 is loaded with former FLW Cup champions, Anglers of the Year, and an accomplished local pro with a vast wealth of experience on Lake Erie, the Detroit River and Lake St. Clair.

MLF pro Josh Bertrand of San Tan Valley, Arizona, who led the tournament after day one, weighed a five-bass limit Thursday totaling 22 pounds, 14 ounces to reclaim the lead with a three-day total of 62-12.

Pro Jacob Wheeler of Harrison, Tennessee, (60-9), who has finished 1st and 2nd in the previous two Super Tournament events, vaulted into second place after bringing in a limit weighing 22-5. Justin Lucas of Guntersville, Alabama, (59-8), Arkansas’ Spencer Shuffield (57-14) and Alton Jones Jr. of Lorena, Texas, (57-0) round out the top five. Local angler Scott Dobson of Clarkston, Michigan, (55-4) sits in sixth place.

The four-day event featured 187 of the world’s best bass-fishing professionals from FLW and Major League Fishing (MLF) angling for a piece of $1.3 million, including the first-place prize of up to $160,000.

With the field now cut to 10 and a 2-pound, 3-ounce cushion heading into the final day, Bertrand is ready to see how it all shakes out on Championship Friday.

“This morning I caught two fish early that really helped me slow down,” said Bertrand, who finished the MLF Bass Pro Tour season ranked No. 20 overall. “I had six hours to get just three more bites, and it turned out to be a great day of fishing. I even made a couple of culls, and that’s about as much as you can ask for in this tournament right now.

“Every day, as guys fall off it opens more water up,” Bertrand continued. “Yesterday, I was sharing a spot with 7 or 8 guys. Today, it was three. Tomorrow, it’ll likely be just one or two of us in the area. There is less fish, for sure, but we have the freedom to move around now and that at least gives me a chance.”

Bertrand said that his key baits and spots have remained the same all week – he’s drop-shotting a small island shoal with a Berkley PowerBait Maxscent Flat Worm.

“I’m definitely excited to be leading going into the final day,” Bertrand said. “We’ll try to get a good night’s rest and prepare for anything tomorrow. I’m hoping to go back out to the same spot and burn it up. But it could be blowing 20 miles per hour in the morning and I might be fishing for largemouth. Who knows what’ll happen, but either way I’m super excited and ready to see how it all shakes out.”

The top 10 pros advancing to the final day of competition on Lake Erie are:

Full results for the entire field can be/ found at FLWFishing.com.

The Tackle Warehouse Pro Circuit Super Tournament at Lake Erie is hosted by the City of Sandusky and the Lake Erie Shores & Islands Welcome Center. The total purse for the event is more than $1.3 million, including a top prize of up to $160,000.

In Tackle Warehouse Pro Circuit Super Tournament competition, the full field of 187 pro anglers competed in the two-day opening rounds on Tuesday and Wednesday. The top 50 pros based on their two-day accumulated weight advanced to Thursday. Now, only the top 10 pros will continue competition on Championship Friday, with the winner determined by the heaviest accumulated weight from the four days of competition.

Pro Ron Nelson of Berrien Springs, Michigan, the 2019 Polaris Rookie of the Year, clinched the 2020 AOY title this week after his 34th place finish. Nelson will receive his entry fees paid for the entire 2021 Tackle Warehouse Pro Circuit season for his win.

The final 10 anglers will take off at 7 a.m. EDT Friday from the Shelby St. Public Boat Launch, located at 101 Shelby St., in Sandusky. Friday’s championship weigh-in will be held at the Paper District Marina, located at 611 W. Shoreline Drive, beginning at 4 p.m.