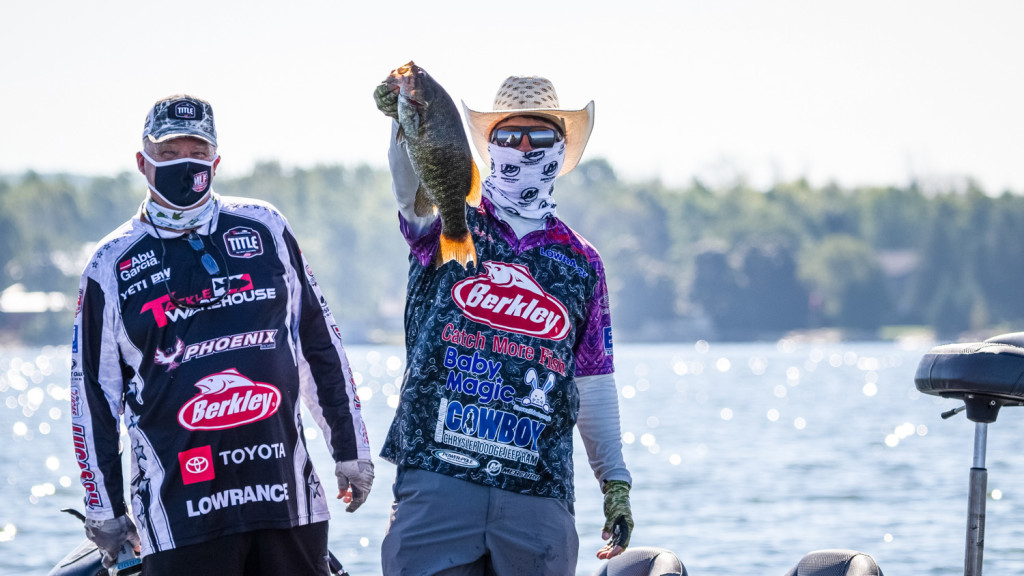 “I started out on a place this morning where I had fished on Tuesday and caught a 3½ pounder on my first cast,” said Cifuentes. “Other than that, every place that I fished today was brand new water for me. I put the (Berkley) Flat Worm to work and caught a ton of fish. My goal was to catch around 20 pounds and finish in the top 10, so to catch almost 50 and win the round – I’m feeling ecstatic.

“I really think that I can do even better tomorrow than I did today,” Cifuentes continued. “I wasn’t really doing anything different today – I was fishing the same pattern, the same depths, but I put a few things together mid-day and it just clicked. I’m really excited to get back out there.”

Cifuentes said that every bass that he caught came on the drop-shot rig, fished on an Abu Garcia Veritas Winch Spinning Rod with an Abu Garcia Revo Premier 30 spinning reel. He used 15-pound Berkley X5 braided line with a 6-pound Berkley Trilene 100% fluorocarbon leader and a No. 1 Berkley Fusion19 drop-shot hook.

“My goal coming into the event was to make it to the Knockout Round, so now I’m going for it,” Cifuentes said. “I want to win it, bad. I feel like I’m on the right fish and if things work out, I can do it.”

South Carolina pro Bradford Beavers caught the most weight Thursday – 17 bass weighing 56-1 – to make the biggest jump of the day, climbing to eighth place to punch his ticket to the Knockout Round after starting the day in 24th.

“I was doing the math and I thought that if I could somehow catch 17 fish today, I might have a shot,” Beavers said. “I lost two, but I still caught 17 and it ended up working out for me. The conditions weren’t favorable – there was no wind – but the fish were biting pretty steadily for me. I never had a big lull, I caught one about every 20 minutes on the Berkley Flat Worm.

“It was very stressful – I never felt safe until I caught the 5-pounder with about a minute left in Period 3,” Beavers went on to say. “But now, everyone starts over. I came into today with one good area, now I think I have two good areas. So, I’ll hit them again tomorrow and go, go, go until I run into them.”

The top 10 pros from Group B after the Qualifying Round finished:

Overall there were 214 bass weighing 710 pounds, 11 ounces caught by the 25 pros in Group B Thursday.

The top 10 pros from both Group A and Group B now advance to Friday’s Knockout Round. Tournament weights are zeroed, and anglers will compete to finish in the top 10 for the opportunity to advance to the sixth and final day of competition on Saturday.

The 20 anglers that will Compete in Friday’s Knockout Round are:

Unique to the TITLE Championship, the event is being fished using the MLF catch-weigh-immediate release format. A select group of 25 pros (Group A) competed on Days 1 & 3 (Monday & Wednesday), and the other 25 pros (Group B) competed on Days 2 & 4 (Tuesday & Thursday). Now, the top-10 pros from each group based on their cumulative two-day total will advance to Day 5 (Friday). Only the top 10 pros will continue on to the sixth and final day of competition Saturday, with the winner earning the inaugural Tackle Warehouse TITLE Championship Belt presented by Toyota.