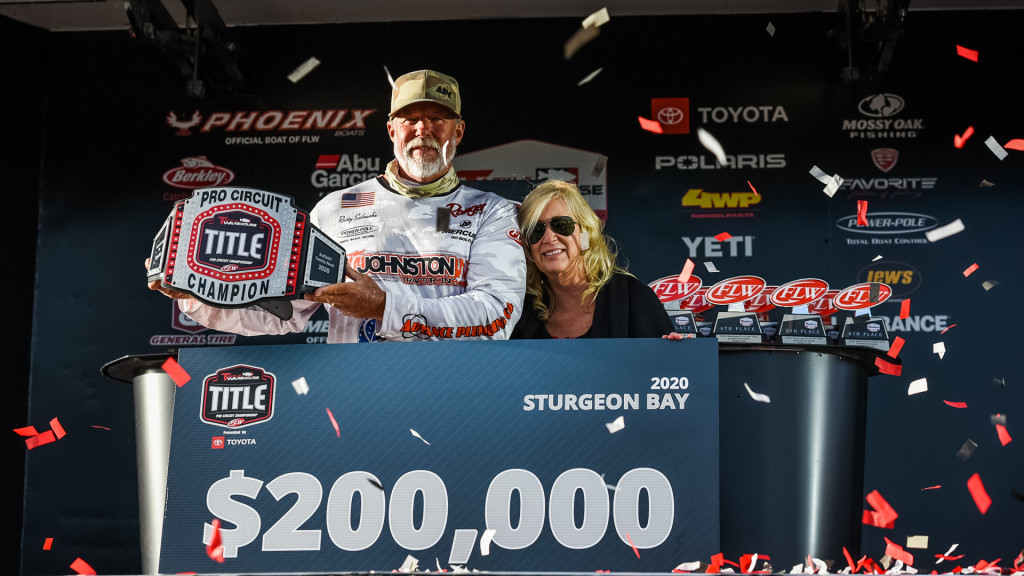 STURGEON BAY, Wis. – Pro Rusty Salewske of Alpine, California, caught 13 smallmouth bass totaling 48 pounds, 11 ounces, Saturday to win $200,000 and the TITLE belt at the inaugural Tackle Warehouse TITLE presented by Toyota, the FLW Pro Circuit Championship on Lake Michigan in Sturgeon Bay, Wisconsin. Salewske won by a slim 8-ounce margin over pro Bradford Beavers of Summerville, South Carolina, who caught 16 bass weighing 48-3, good for $50,000. Saturday’s final day of competition marked the finale of the Tackle Warehouse TITLE, which featured the top 50 anglers from the Tackle Warehouse Pro Circuit competing over six days for a purse of $820,000, including the top prize of $200,000.

“This is the best thing that has ever happened to me in my fishing career, by far,” said Salewske, who stepped away from pro-level competition in 2011 before returning to the Tackle Warehouse Pro Circuit this season. “Of course having children and grandkids and things like that are better, but this is just unbelievable.

“I really think my experience helped me today,” Salewske said. “I’d been in this situation before. I almost won the 2009 FLW Cup. I was leading after day three and I only had to catch three keepers. It was mine to win. But I let the pressure get to me that day. Today, I just tried to stay calm and composed and that helped me, for sure.”

With just 12 minutes left to fish, Salewske sat in second place with 43-13 – 4 pounds, 6 ounces, behind Beavers. Salewske then calmly hooked and landed his last fish – a 4-pound, 14-ounce smallmouth – to overtake Beavers, who had held the lead all of Period 3, and finish out the final minutes atop the leaderboard in a dramatic finale.

“My knees were shaking the whole time I was fighting that fish,” Salewske said. “I had no trolling motor battery left at that point, we were blowing 8 miles an hour down the bank, and I had no control over the fish. When I finally landed her, I was thrilled but I thought I was still going to need one more.”

Salewske said that he caught all of his fish throughout the week on a Yamamoto Shad Shape worm on a drop-shot rig, until today.

“I’d been catching them all week on the shad shape worm, but today they wouldn’t bite anything but the (Berkley) Flat Worm. They love that dang Flat Worm, and that’s what I caught all 13 bass on today.

“I try to go into every tournament thinking that I can win,” Salewske went on to say. “During practice, I was thinking ‘maybe not’. But you just have to keep fishing. I kind of started to figure them out, and my friend Wade (Strelic) kind of walked me through what the fish were doing. I would not be standing here right now without him.”

The top 10 pros at the Tackle Warehouse TITLE presented by Toyota on Sturgeon Bay finished:

Overall there were 69 bass weighing 238 pounds, 15 ounces caught by the final 10 pros Saturday. Buck caught the largest fish of the day – a 5-pound, 10-ounce smallmouth bass.

The 2020 Tackle Warehouse Pro Circuit featured a field of 150 of the top professional anglers in the world competing at six regular-season events around the country. The top 50 anglers in the Angler of the Year (AOY) standings after the six events qualified to compete in the inaugural Tackle Warehouse TITLE presented by Toyota.