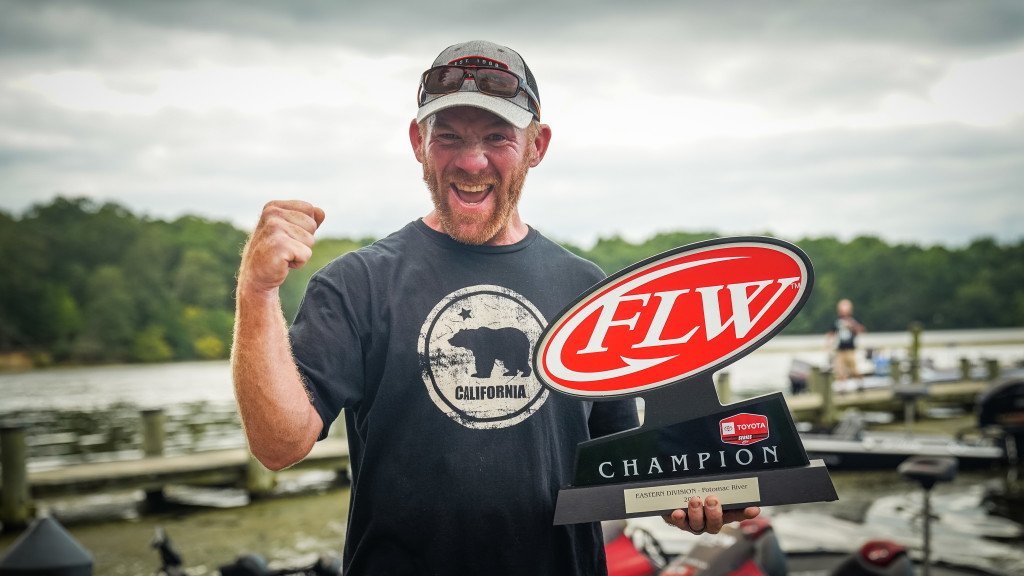 MARBURY, Md.  – Toyota Series angler James Maupin of Stanardsville, Virginia, brought a five-bass limit to the scale Saturday weighing 13 pounds, 13 ounces to win the three-day Toyota Series at the Potomac River tournament in Marbury, Maryland. Maupin’s three-day total of 15 bass weighing 40-11 earned him the win by a 7-ounce lead over second-place angler Todd Walters of Kernersville, North Carolina, and earned Maupin the top payout of $24,293 in the second tournament of the 2020 Toyota Series Eastern Division.

Maupin was ecstatic just to make a top 10 in a field with Potomac hammers like this event featured, but to win was even more special.

“This win means a lot,” Maupin said. “It definitely makes all the hard work worth it to know I can compete with these guys.”

The two areas Maupin spent the majority of his time on this week were Greenway Flats and Mason Neck. Each area had a 200-yard stretch that he would work back and forth, no matter the tide, and each produced fish throughout the day.

“I’m not very familiar with tides, so I just put my head down and fished,” said the 42-year-old angler. “I got on this bite Wednesday and it was so consistent. When the sun would peek out I couldn’t get a bite going, but when it was cloudy I had success throwing a spinnerbait down those grass lines. Thankfully it was consistently cloudy all three days of the tournament.”

The bread and butter for Maupin was a 3/8-ounce Terminator spinnerbait with two gold willow blades. He had two identical spinnerbaits rigged on the deck, one on 15-pound-test fluorocarbon and the other on 20-pound-test to help the bait run lower or higher in the water. When the sun came out, especially on day two, Maupin ran a V&M swim jig with a Zoom Fat Albert Twin Tail Grub as a trailer to get a few bites.

As a brick mason by day, Maupin is more than happy to see fish pay the bills for a change. Though he may not be ready to dive into fishing full-time, he’s excited to keep competing at this level.

“This is seriously one of the greatest moments of my life,” said Maupin. “It’s just amazing. I’m going to use this check to pay off my house, so it’s cool to say I was able to do that by fishing. I’m not sure what I’m going to fish next year, but I definitely want to keep it going."

Pike took home an extra $1,000 as the highest finishing FLW PHOENIX BONUS member. Boaters are eligible to win up to an extra $35,000 per event in each Toyota Series tournament if all requirements are met. More information on the FLW PHOENIX BONUS contingency program can be found at PhoenixBassBoats.com.

The top 10 co-anglers on the Potomac River finished:

The Toyota Series at the Potomac River was hosted by the Charles County Board of Commissioners. It was the second of three regular-season tournaments in 2020 for Eastern Division anglers. The next event for Toyota Series anglers will take place on Sept. 24-26 – the Toyota Series at Clear Lake in Clearlake, California. For a complete schedule, visit FLWFishing.com.