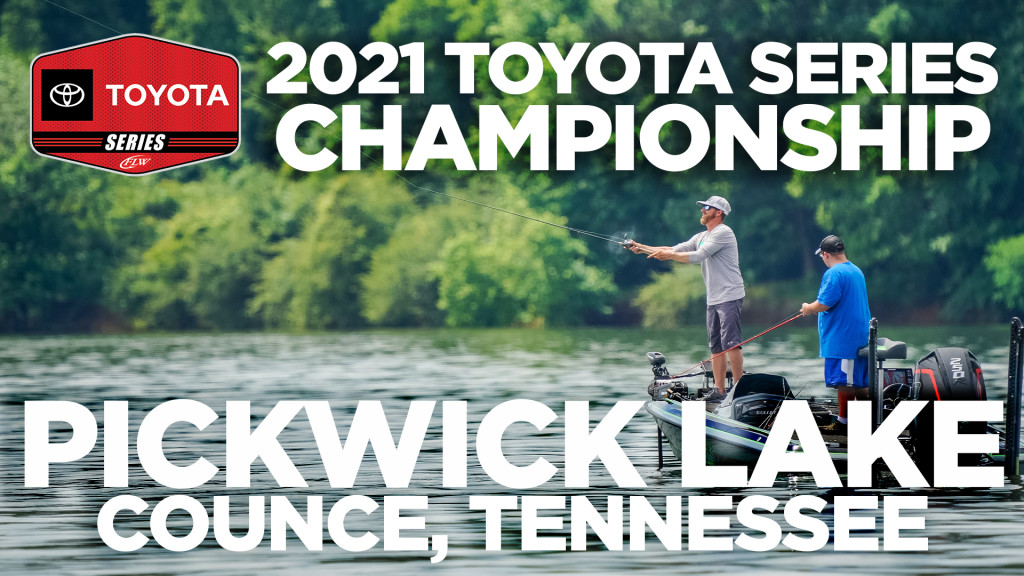 Pickwick Lake is a familiar destination for FLW and its Toyota Series anglers. The fishery has played host to numerous Tackle Warehouse Pro Circuit, Toyota Series, Phoenix Bass Fishing League and Abu Garcia College Fishing events over the years. The 2021 Toyota Series Championship marks the first time that FLW will run a tournament in Counce.

“We are proud that Pickwick Lake and Hardin County were selected to host the 2021 FLW Toyota Series Championship,” said Dennis Tumlin, Chief Customer Officer for the State of Tennessee Department of Tourist Development. “Our partners at the Tennessee State Parks recently cut the ribbon on an $11 million renovation project at Pickwick Landing State Park in Counce and have created one of the premier fishing tournament destinations anywhere in the Southeastern United States. We’re thrilled to have the opportunity to showcase this amazing facility as we host the Toyota Series Championship.”

“Pickwick Lake has been the site of many successful FLW events over the years,” said Mark McWha, Director of Tournament Operations for the Toyota Series. “We are thrilled to be working with our partners at the Hardin County Convention and Visitors Bureau to bring the Toyota Series Championship to Tennessee in 2021.”

The championship will launch from the Pickwick Landing State Park, located just south of Pickwick Dam, at 120 Playground Loop in Counce, Tennessee. Accommodations in the park include a lodge and restaurant, cabins, and camping. In addition to water sports, guests enjoy golfing, birding, picnicking, disc golf, nature walks and tennis. The park contains 1,416 acres of forested hills and hollows.

“Pickwick Lake is known for great fishing and scenic beauty that we get to enjoy every day,” said Beth Pippin, Tourism Director, Hardin County Convention and Visitors Bureau. “Hosting this tournament will allow us to showcase our beautiful area with national media exposure. The event will bring dollars into our community for a huge economic impact. Anglers, FLW staff and their families will spend money when they stay, shop and dine the week leading up to the big tournament. It’s a win-win for everyone,”

The 2021 Toyota Series will consist of six divisions – Central, Northern, Plains, Southern, Southwestern and Western – each holding three regular-season events, along with the International division. Anglers who finish in the top 25 in each division’s Angler of the Year (AOY) standings will qualify for the no-entry-fee Toyota Series Championship for a shot at winning $200,000 cash, plus lucrative contingency bonuses like the $35,000 FLW PHOENIX Bonus offered this season. The winning co-angler at the championship earns a $33,500 Phoenix 518 Pro bass boat (or comparable model) with a 115-horsepower Mercury outboard.

The complete 2021 Toyota Series schedule was announced earlier this month. The full schedule can be found online at FLWFishing.com.