Southwestern Division Pro Leads by 9-Ounce Margin in Competition for $235,000 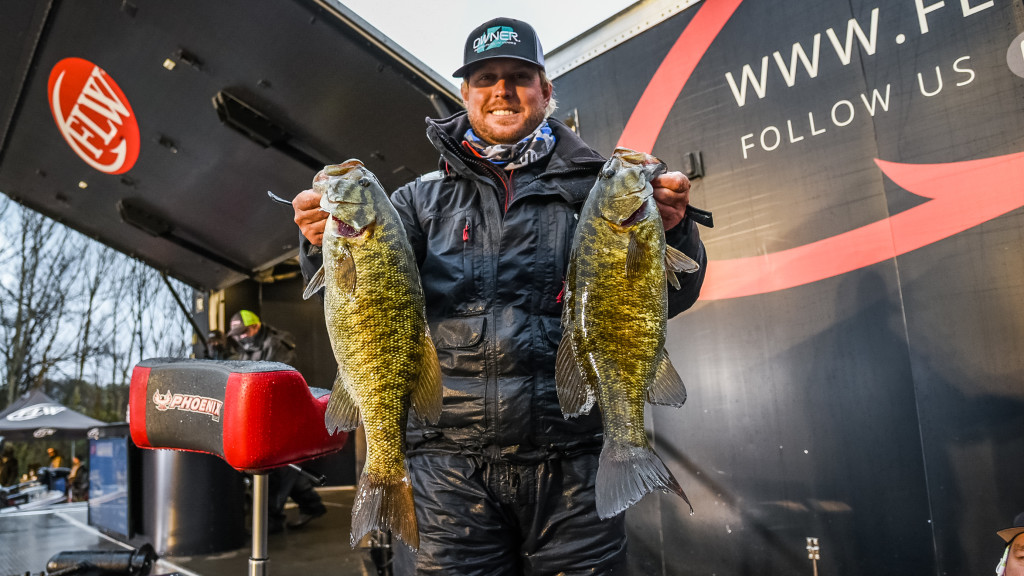 BURNSIDE, Ky. – Pro Dakota Ebare of Denham Springs, Louisiana, crossed the stage Friday with a five-bass limit weighing 16 pounds, 12 ounces, for a two-day total of 10 bass weighing 30 pounds, 13 ounces to lead after Day Two of the Toyota Series Championship on Lake Cumberland, in Burnside, Kentucky. Ebare now holds a 9-ounce lead over pro Cameron Lineback of Mount Airy, North Carolina who weighed a two-day total of 10 bass for 29-9 – in the championship event that featured 221 boaters and co-anglers competing a top cash award of up to $235,000 on the pro side, and the keys to a new Phoenix 518 Pro bass boat with a 115-horsepower outboard for co-anglers.

The field is now cut to just the top 10 boaters and co-anglers for the final day of competition in the no-entry fee Toyota Series Championship, hosted by the Somerset Tourist & Convention Commission and the Burnside Tourism Commission, that featured the top 25 pros and top 25 co-anglers from each of the eight Toyota Series divisions and tournament winners, the highest finishing boater and co-angler from each regional at the All-American, the College Fishing National Champions and second-place team, and the top pros and co-anglers from the FLW International Division.

Ebare is guaranteed the $10,000 bonus awarded to the highest finishing angler from each division and is the only Southwestern Division angler to make the top 10.

“I caught about the same amount of fish today as I did on Day One, but today the quality showed up,” said Ebare. “I was going through the motions the first day I arrived and had a tactic in mind that worked at Dale Hollow, but it just wasn’t happening here on Lake Cumberland. I started trying to find something else and ran into a little pattern that I’ve expanded every day of practice.

“The practice day that turned nasty and cold, with high winds and snow – that was a good day for me. They were biting good and I was able to dial in where they were at, which keyed me in on the pattern.”

That’s the pattern Ebare said he’s been running the last two days and it seems to be working.

“I’m extremely blessed and thankful. God has blessed me so much all year. I’ve had some ups and downs, but this is a humbling sport and that’s just part of it. You have to roll with the punches and keep going.

“To win $235,000 would be a lot of money. Winning this championship would be something special and a great way to cap off the year.”

The top 10 pros that advanced to the final day of competition on Lake Cumberland are:

Travis Otto of Jefferson City, Missouri, shot to the lead in the co-angler division Friday with four bass weighing 6 pounds, 1 ounce. His two-day total of eight bass weighing 15-5 gives him a 9-ounce lead over Mario Riojas of Blanchard, Oklahoma, who has weighed seven bass totaling 14-12, good for second place. Co-anglers are competing for a new Phoenix 518 Pro bass boat with a 115-horsepower outboard.

The top 10 co-anglers that will fish the final day on Lake Cumberland are:

The final 10 boaters and co-anglers will take off Saturday from General Burnside Island State Park, located at 8801 S. Highway 27 in Burnside, at 7:30 a.m. EST. Saturday’s Championship weigh-in will be held at the State Park beginning at 2:30 p.m. Attendance is limited to competing anglers, family and essential staff. Fans are encouraged to follow the event online through the “FLW Live” weigh-in broadcasts and daily coverage at FLWFishing.com.