Lake Quivira, Kansas Angler Leads After Day 1 of Qualifying Round Group A with 21 Bass Weighing 46 Pounds, 2 Ounces – Group B to Compete Saturday 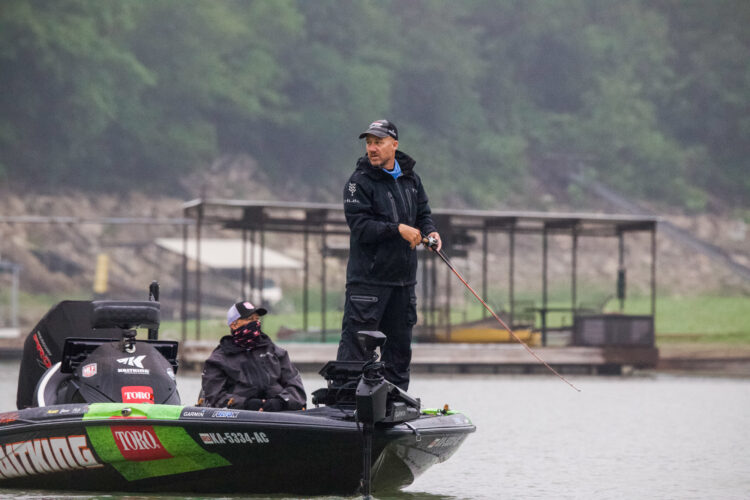 AUSTIN, Texas – Pro Brent Chapman of Lake Quivira, Kansas, caught 21 bass totaling 46 pounds, 2 ounces, to grab the early lead in Qualifying Group A on Day 1 of the Major League Fishing (MLF) Bass Pro Tour Berkley Stage Two at Lake Travis Presented by Mercury event. The six-day event, hosted by the Austin Sports Commission, features 80 of the top professional anglers from around the world competing for a purse of $805,000, including a top cash prize of $100,000 to the winner.

Chapman will bring a 5-pound, 6-ounce, lead into Sunday’s second day of competition for Group A. In second place on the SCORETRACKER® leaderboard is General Tire pro Mark Rose of Wynne, Arkansas, who has eight career victories – including a Tackle Warehouse Pro Circuit (then FLW Tour) win on Lake Travis in 2017 – who caught 16 bass weighing 40-12. Texas pro Alton Jones Jr. of Waco sits in third place, 19½ pounds back of Chapman with 16 bass weighing 26-10.

Chapman had a huge third period rally Thursday, catching 18 pounds in the final period alone to overtake Rose and never relinquish the lead. He did most of his damage with a vibrating jig, but he also added a few keepers with a squarebill crankbait.

“What a day. If someone had told me I’d be leading after Day 1 of this event, I’d have told them they were crazy,” Chapman said. “It just goes to show you what hard work in practice does. I had an absolute blast on the water today doing what I love to do.”

Chapman caught most of his fish fishing stained water in the back of a creek, an area that he said he found on a prior trip to Lake Travis.

“The last time I was here, I went way up the river and flipped a big worm and a jig and caught fish in the dirtier water,” Chapman said. “I went up there again, but the lake is nearly 12 feet lower than the last time, so I think I’m a little too early for that deal. I got into this little creek that I remembered – it has a little bit of an off-color to it – and caught several fish there during practice.

“The thing that is most intriguing to me about that spot is that I caught a 4 (pounder) and several 2½ (pounders), so it seems like the average fish in this creek is a little better than everywhere else. It just seems like it has all of the perfect ingredients. I’m really looking forward to getting back out here Sunday, it should be a fun one.”

The top 20 pros in Group A after Day 1 on Lake Travis are:

Overall, there were 244 bass weighing 526 pounds, 14 ounces caught by the 40 pros on Friday, which included one 7-pounder, one 6-pounder and 11 4-pounders caught from Lake Travis.

Russ Lane won Friday’s $1,000 Berkley Big Bass Award, weighing in a 7-pound, 12-ounce largemouth on a swimbait during Period 1. Berkley will award $1,000 to the angler that weighs the biggest bass each day, and a $3,000 bonus to the angler who weighs the largest bass of the tournament.

The 40 Anglers in Group A compete in their two-day qualifying round on Friday and Sunday – the 40 anglers in Group B on Saturday and Monday. After each two-day qualifying round is complete, the anglers that finish in 2nd through 20th place from both groups advance to Tuesday’s Knockout Round, while the the winner of each group advances directly to Wednesday’s Championship Round. In the Knockout Round, weights are zeroed and the remaining 38 anglers compete to finish in the top 8 to advance to the Championship Round. In the final day Championship Round, weights are zeroed and the highest one-day total wins. Full breakdown of the format can be found at MajorLeagueFishing.com.

Anglers will take off at 6:30 a.m. CT each day of competition from Mansfield Dam Park, located at 4370 Mansfield Dam Park Road in Austin. The General Tire Takeout will also be held at the park daily beginning at 3 p.m.

As part of the event, fans will also be treated to the Hill Country Hangout at Bass Pro Shops in Round Rock, Texas, on Saturday and Sunday from 11 a.m. to 4 p.m. The free event includes the opportunity to interact with Bass Pro Tour anglers, enjoy activities and special fan-only giveaways provided by MLF sponsors, and learn more about the sport of fishing and other outdoor activities in fishing seminars. All activities are free and open to the public. For more information on the Hill Country Hangout hosted by Bass Pro Shops, visit MajorLeagueFishing.com.

The MLF NOW!® broadcast team of Chad McKee, Marty Stone and J.T. Kenney will break down the extended action on all six days of competition from 6:45 a.m. to 3:30 p.m. CT. MLF NOW!®  will be live streamed on MajorLeagueFishing.com and the MyOutdoorTV (MOTV) app.