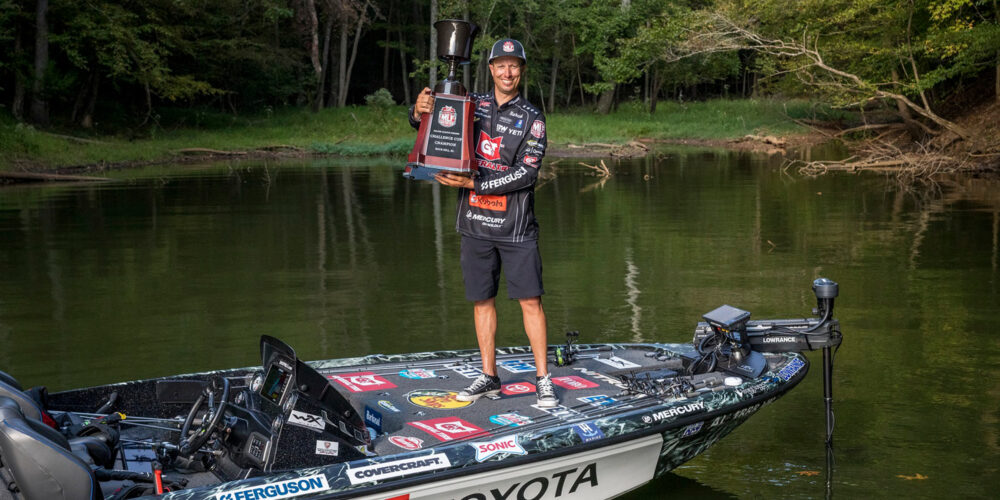 ROCK HILL, S.C. – Ten years ago, California pro Brent Ehrler rolled into the first-ever Major League Fishing (MLF) Cup Event – the 2012 MLF Challenge Cup on Texas’ Lake Amistad – rocking Converse Chuck Taylors and no one knew what to expect. Ehrler walked away the victor that week, topping 23 other anglers and winning the first of what everyone thought would be many Major League Fishing titles. Fast forward 10 years later, and Ehrler has done it again.

In an episode that premiered Saturday on the Outdoor Channel and Monday on the MyOutdoorTV app, Ehrler caught 12 bass weighing 20 pounds, 12 ounces, to narrowly win the second Challenge Cup of his career at the 2022 Lucas Oil Challenge Cup Presented by B&W Trailer Hitches in York County, South Carolina.

“I’ve got goosebumps right now – it’s about fricking time,” said an emotional Ehrler on the water after he learned he had clinched his second career Challenge Cup win. “Man, I’m speechless. It’s been a long time since I won… and it’s been eating away at me.

“This group of guys – they’re so good, they’re so tough to beat, and they keep getting better every year,” Ehrler continued. “I’ve had some close calls the last few years, but this has been a long time coming for sure. And it’s great that it happened on the 10-year anniversary of my last one.”

Ehrler’s key bait in the Championship Round on Lake Wylie was a Neko rig, which he skipped round boat docks.

“I was very excited after the first two rounds – I won both of them and really felt like I had things pretty dialed in,” Ehrler went on to say. “I had some momentum and felt like I was doing the right things. Everything just felt right, and sometimes that’s what it takes to win.”

DeFoe caught the Championship Round Berkley Big Bass – a solid 3-pound, 14-ounce largemouth that bit his Creature Craw during Period 3.

Overall, there were 69 bass weighing 107 pounds, 3 ounces caught by the final eight pros during the Championship Round of competition on Lake Wylie.

The 2021 Lucas Oil Challenge Cup Presented by B&W Trailer Hitches was hosted by Visit York County and premiered on the Outdoor Channel as six, two-hour original episodes each Saturday afternoon debuting on Jan. 1, 2022, and running through Feb. 5, 2022.

The event was shot over six days in September in York County, South Carolina, and featured 23 MLF pro anglers visiting the Rock Hill area to compete on two different fisheries across the region, Lake Wateree and Lake Wylie. The fisheries were unknown to the anglers – they did not learn where they were competing until they arrived at the launch ramp each morning of competition.