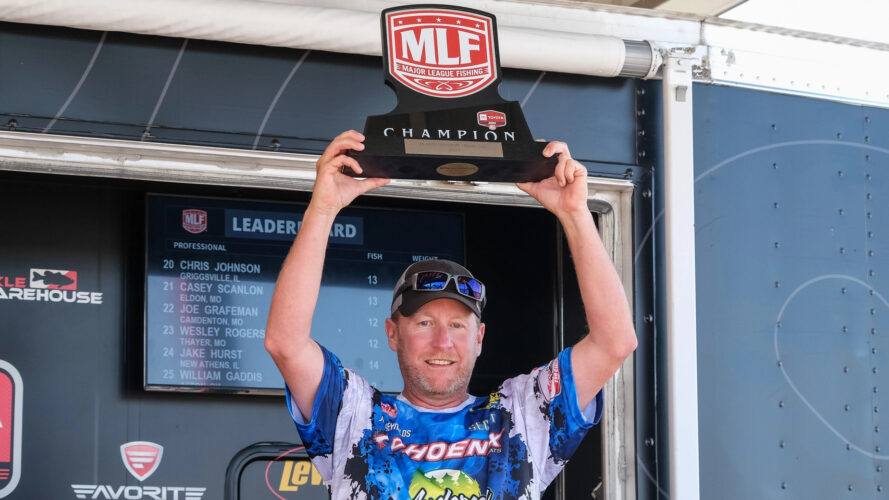 GROVE, Okla. – After starting the final day in sixth place, Jeff Reynolds of Calera, Oklahoma, brought a limit weighing 18 pounds, 3 ounces – the biggest bag of the day – to the scales Saturday to win the Toyota Series Presented by A.R.E. at Grand Lake Presented by Outlaw Ordnance. Reynolds’ three-day total of 15 bass weighing 54-2 earned him the win by an 11-ounce margin over second-place pro Cade Alsbury of of Gentry, Arkansas, and earned Reynolds the top payout of $76,500, including the lucrative $35,000 Phoenix MLF Bonus.

Hosted by the City of Grove, the three-day tournament was the second event of the season for the Toyota Series Plains Division anglers and featured the region’s best bass-fishing pros and Strike King co-anglers, competing for up to $75,000 and the opportunity to advance to the Toyota Series Championship for the chance to win up to $235,000.

This event marks the second Toyota Series win for the Tackle Warehouse Pro Circuit pro, who previously won on Lake Texoma in 2017.

“This event was all sight fishing – This is my favorite time of year, and I caught every one of my fish on beds,” Reynolds said. “I didn’t find a lot of big fish in practice, and I caught the two I did find on the first day of competition, so I didn’t really have a whole lot left after that first day.”

Reynolds ended Day 1 in second place, with a limit weighing 21 pounds, 8 ounces, but quickly fell to sixth by the end of Day 2.

“I knew where a lot of fish were, but not any big ones,” Reynolds said. “I went back on the second day and found some decent ones and thankfully I caught a good 4 ½-pounder later in the day that bumped me up to the 14-pound mark to finish out Day 2.

“When I found that fish, it didn’t take me long to get it to bite, but I foul-hooked it and had to throw it back,” Reynolds said. “Then it took another 30 minutes to get it back to the bed, so I could catch him again.”

While he didn’t bring in a large limit on Day 2, that kicker fish did give him a limit weighing 14-7, a solid bag that kept him in contention for the final day.

“Sight fishing is mainly reacting to what the fish do, so I throw that white bait when the fish are really locked on the bed and I want to be able to see that they lock on, have it in their mouth and aren’t foul-hooked,” Reynolds said. “I throw the neutral Okeechobee Craw-colored bait when they aren’t locked on. Sometimes I can flip that in the bed and get them to bite.”

Reynolds also said a big player for his win were his Amphibia Performance Sunglasses.

“They are the best sunglasses for sight fishing,” Reynolds said. “I’ve tried a bunch of different ones because I love sight fishing and I feel like I can see a lot more fish, even in dirtier water, with those glasses. They make a huge difference.”

“I’m currently sitting fifth in points for the Southwestern Division and I’m about to head to that final event, but I’d already entered the Grand Lake tournament to give myself a fourth event for the Wild Card division,” Reynolds said.

With the Grand Lake win however, Reynolds can now rest easy knowing the win automatically advances him to the Toyota Series Championship and the opportunity to win up to $235,000.

“A lot of guys will say they appreciate the hardware, but I’m not too concerned about the trophies,” Reynolds said with a laugh. “I care about the money that comes with it and am excited about this win and the opportunities it opens up for me.”